Google launched the next generation of its smartphone today, unveiling Pixel 2 and the Pixel 2 XL, along with the Pixelbook and Pixel Buds. Executives and team leads from the Alphabet-owned company took to the stage in San Francisco to introduce its latest line of hardware offerings.

CEO Sundar Pichai opened the event, diving into how artificial intelligence is shaking up Google’s products and its integral role in driving computing forward.

“This is why we’re excited about the shift from a mobile-first to an AI-first world,” said Pichai. “The rate of which we’re seeing progress in AI is amazing.”

Machine learning is powering the Pixel 2, Pixel 2 XL, Pixelbook and Pixel Buds—four new products unveiled in the Made by Google family. The Google Assistant is integrated into all three devices and it has become smarter as well.

Rick Osterloh, the senior VP of hardware, touted that 100 million answers were added to the intelligent assistant in the last year. Osterloh said that reimagining software starts with machine learning.

That was just the beginning for Google as they hammered home how their products are at the intersection of AI, software and hardware.

Only rolled out last year, the Pixel line was wildly embraced by Android users. Pixel was noted for its stunning camera, crisp OLED display technology, super fast charge and (since removed) headphone jack. 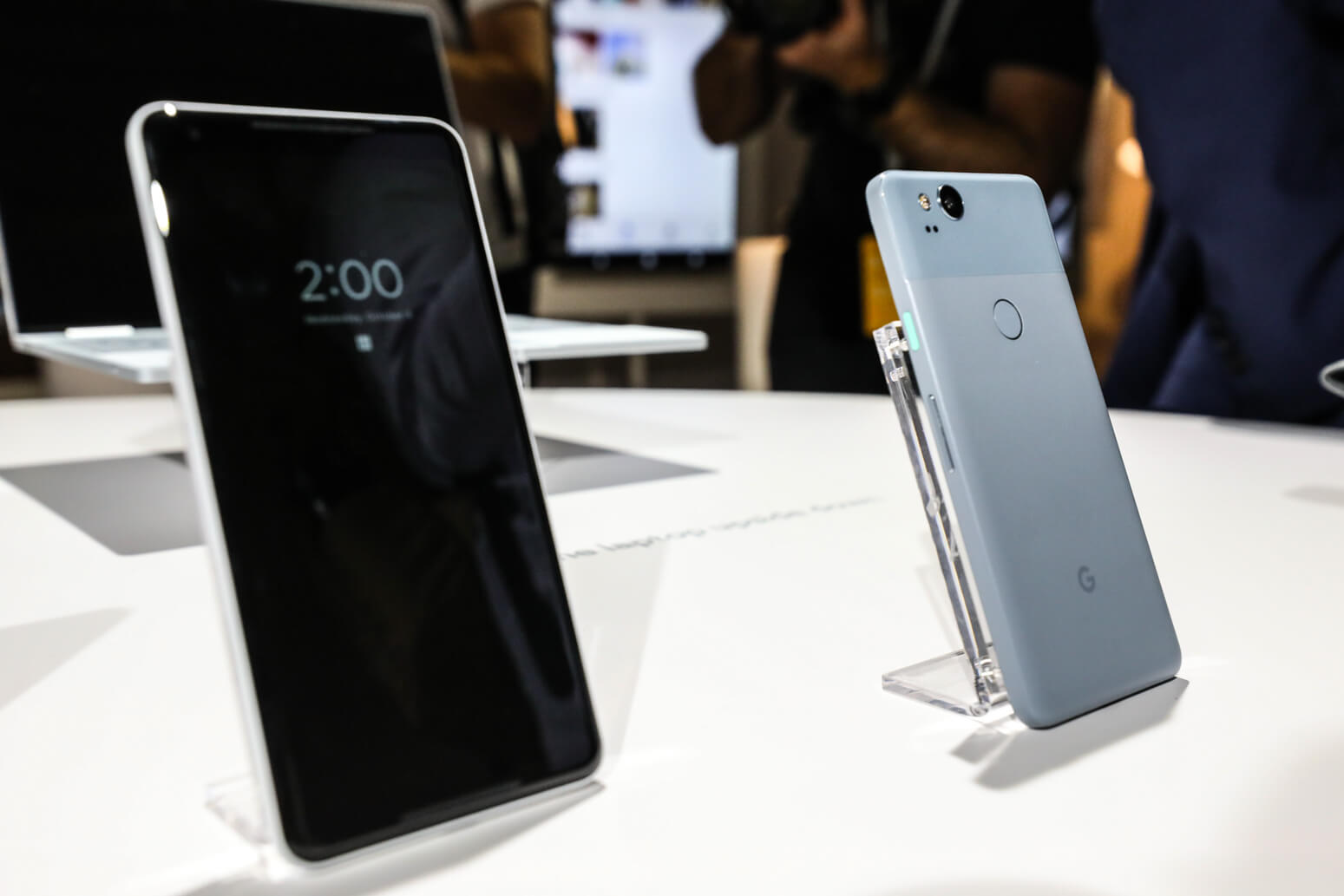 Mario Queiroz, VP of product management at Google, revealed the two new Pixel phones: the five-inch Pixel 2 and the six-inch Pixel 2 XL. Both phones have a sleek, all-aluminum body and a colored glass band at the top of the device acting as a backdrop to the full HD OLED display.

The fingerprint sensor is on the back of the device, where Queiroz noted is a natural position for the index finger to fall. The dual front-facing stereo speakers mean the sound isn’t muffled when holding a Pixel 2 in landscape mode. Taking a cue from Apple, Google has removed the headphone jack, relying solely on the digital USB-C port for both charging cables and headphones.

It takes only 15 minutes to power the phone for seven hours, and the device itself is IP67 water resistant. Both phones come in three colors: ‘kind of blue’, ‘just black’ and ‘clearly white’. An intentional squeeze of the phone will summon Google Assistant for help.

The only difference between the two devices is the size and the price.

“We don’t set aside better features for the larger device,” said Queiroz, an obvious dig at Apple iPhone 8 which is slightly less capable than its big brother, the iPhone 8 Plus.

Aparna Chennapragada, product director at Google, showed off how the Pixel’s Google ‘Lens’ features which can capture information from a flyer, saving a phone number, an email address, a physical address and add it to a contact profile. Lens can also provide information about seemingly anything that can also be Googled. The demo included artwork, album covers, and landmarks–all by taking a photo.

Oh, and it takes great photos too. The Pixel 2 earned a DxOMark score of 98 out of 100—what Queiroz said is the highest score of any smartphone camera on the market. By comparison, the Pixel 1 score 89 last year, the iPhone 8 Plus and the Samsung Galaxy Note8 each received a 94.

Both Pixel 2 phones also come with a portrait mode, capturing crisp portrait photos with a shallow depth-of-field effects–without two cameras as in the iPhone 8 Plus. The dual pixel sensor technology means only one camera is needed for portrait shots, and the Pixel 2 is ready to go for selfies through the front-facing camera. Google’s fuse video stabilization technology combines optical and digital image stabilization delivering smooth video with less motion blur. To store both photos and videos, Pixel 2 comes with free, unlimited cloud storage.

“If you used iCloud, you would reach your free image storage in three months,” said Queiroz. He also claimed that a Pixel user takes twice as many photos as the typical iPhone user.

Google’s biggest phone rivals are still the duopoly of Apple’s iPhone and Samsung Galaxy. While the Pixel 2 may not generate the same fanfare as Apple or Samsung, Google has firmly planted themselves within the mobile hardware business by offering a superior camera and integration with Google Home devices. They recently bought HTC’s smartphone team for $1.1 billion—a move they called their “big bet” on hardware.

At 10mm thin and one kilogram light, Google’s Pixelbook is a high-performance aluminum Chromebook with a 12.3-inch touchscreen display. 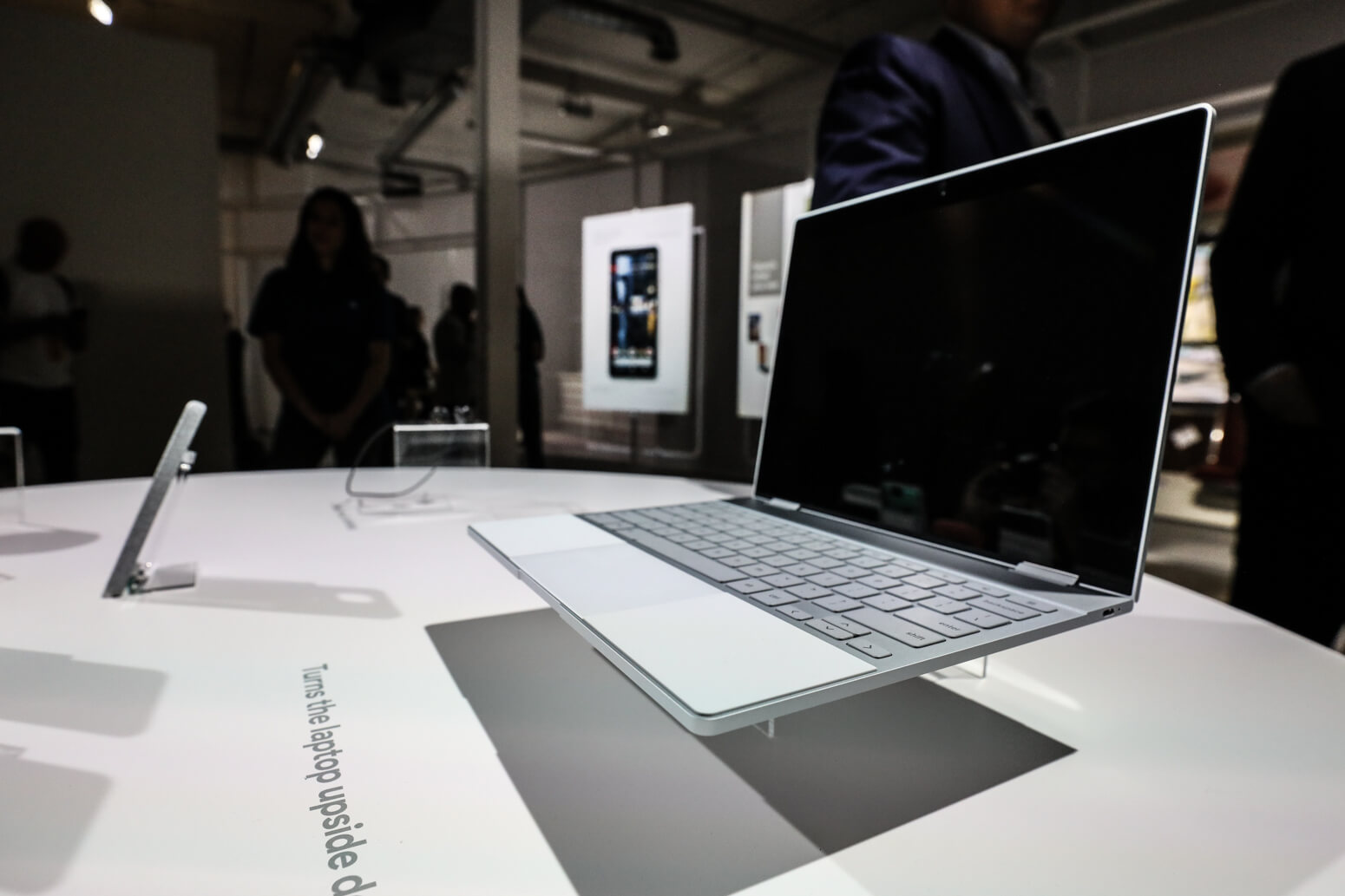 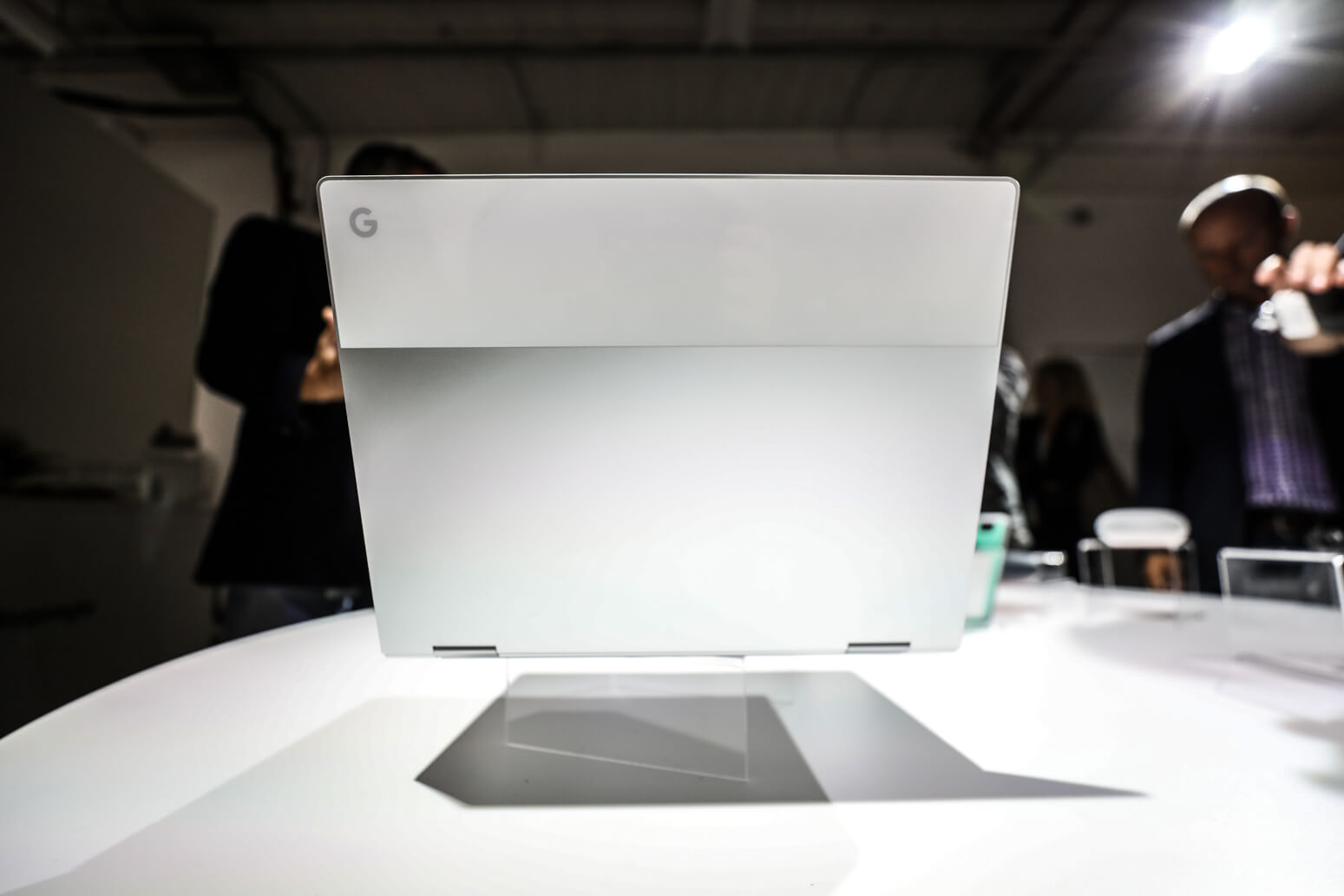 The Pixelbook comes after Google discontinued the Chromebook Pixel last year, and introduces Google consumers to three different configurations with up to 16G of RAM and 256GB of storage. They have two USB-C ports and are quickly powered with its 45W fast charger. The Chromebook also comes with instant tethering, automatically using a Pixel phone’s network when other networks aren’t available.

The Pixelbook was the first laptop with Google Assistant directly built in and integrates with the Pixel Pen, Google’s latest stylus device. Google said it delivers the most responsive experience ever: 10 milliseconds of latency and 2,000 levels of pressure sensitivity.

“Circle a word and the assistant will give you everything you need to know,” said Juston Payne, a product manager at Google as he explained the Pixel Pen’s integration with Google Assistant.

The Pixelbook starts at $999 USD with the Pixel Pen at an additional $99. They will both hits stores on Oct. 31 in the U.S., Canada and the U.K., with U.S. pre-orders starting today.

Pixel Buds are Google’s first set of wireless headphones, something that was all but required after dropping the headphone jack from the Pixel 2. 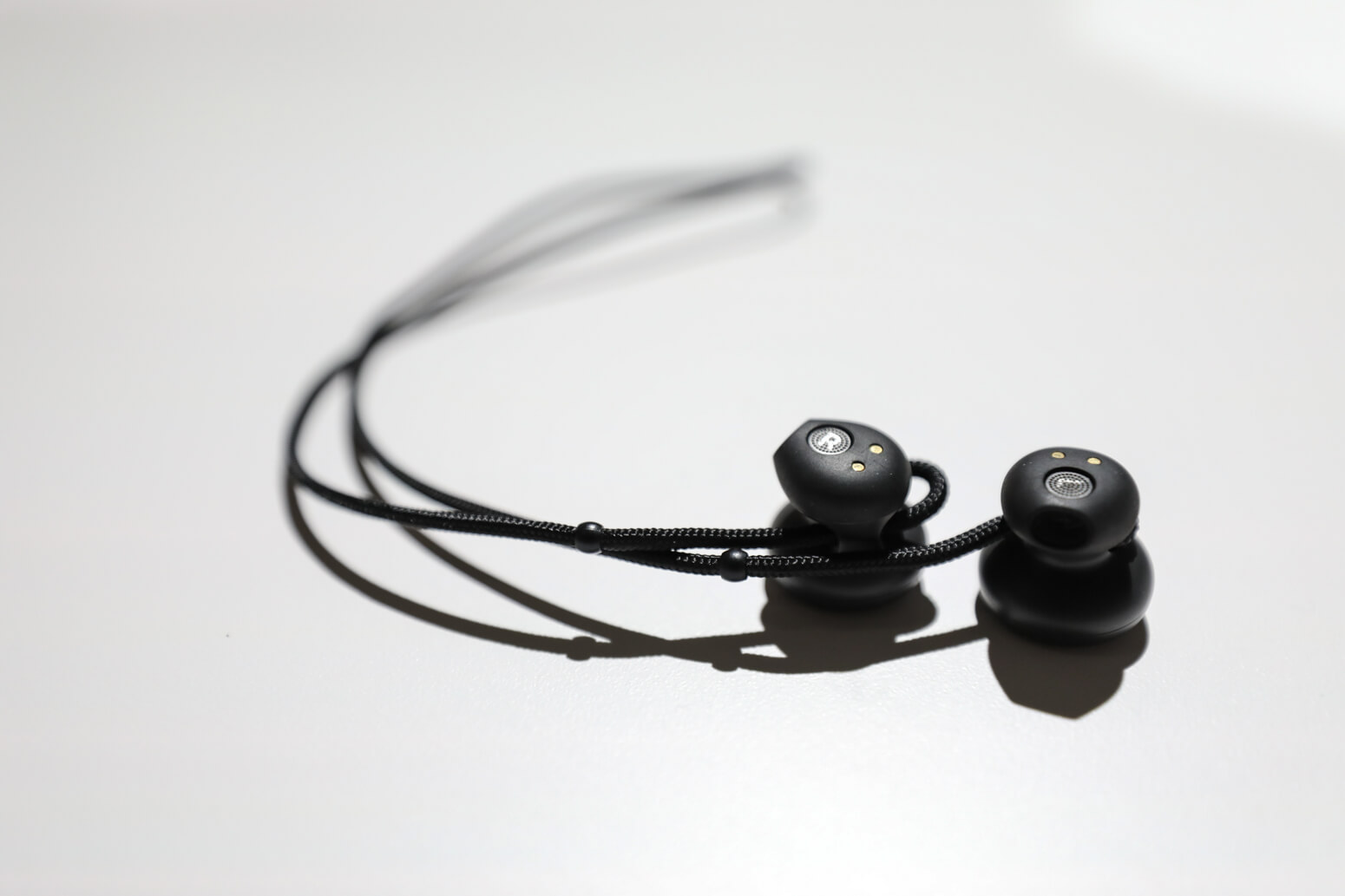 All the controls are built into the right earbud with tap and swipe controls. To talk to Google Assistant, touch and hold the bud to ask the smart assistant to switch playlists or read a text message, allowing users to keep their phone in their pocket.

Google Assistant is also powering real-time translation through the buds, a capability that was demoed at the event to show a live conversation in Swedish and English. The buds can translate 40 languages in real-time.

The round buds are tethered with a nylon cord, and like the Pixel 2 phones, come in ‘kind of blue’, ‘just black’ and ‘clearly’ white.

The Pixel Buds start at $159 USD and are available for pre-order.