Music streaming is growing rapidly. In fact, it’s the number one way to “buy” music in North America today. But are the artists getting a fair shake?

According to the Recording Industry Association of America, Apple Music pays around $12 to an artist per 1,000 streams; Spotify pays around $7; and YouTube pays just $1.

“The unfortunate reality is that we have achieved this modest success in spite of our current music licensing and copyright laws, not because of them,” suggests Cary Sherman, CEO of the RIAA. “It makes no sense that it takes a thousand on-demand streams of a song for creators to earn $1 on YouTube, while services like Apple and Spotify pay creators $7 or more for those same streams.” 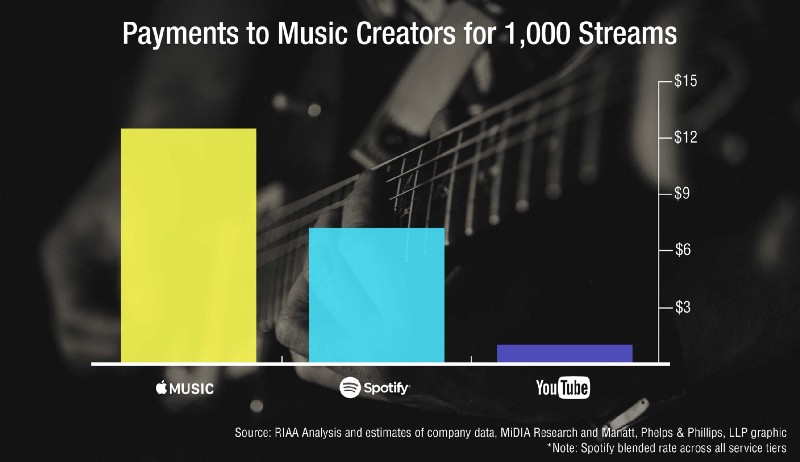 Sherman argues YouTube “wrongly exploits legal loopholes to pay creators at rates well below the true value of music.” Economic think tank Phoenix Center issued a report this week which found laws like the Digital Millennium Copyright Act cause music creators to lose upward of one billion dollars per year due to “distortions in licensing negotiations.”

Sherman says today’s music marketplace is a “rigged system” that prevents artists and even labels from controlling monetization.

“There’s still a lot of work that needs to be done,” he says.

A consortium of 16 music organizations jointly launched ValueTheMusic, a campaign to inform policymakers and fans about laws enacted in the past that undermine the modern music marketplace.

Music Streaming Business Grows, But What About the Rest of the Music Business?