Shopify is a leading cloud-based commerce platform designed for both startup entrepreneurs and mega-sized merchants like Tesla and Google. Tobi Lütke cofounded the company in 2004 originally as an online snowboard shop but soon realized the potential of his retail software.

In the 12 years that followed, much has been accomplished for Tobi, both personally and professionally. He is a husband and father of three, while Shopify has grown into a publicly traded corporation valued in the billions with nearly 2,000 employees across five cities. Add to that a growing reputation for the amazing office culture offered, validated by topping the Glassdoor Employee’s Choice for Canada’s Best Places to Work in 2017. 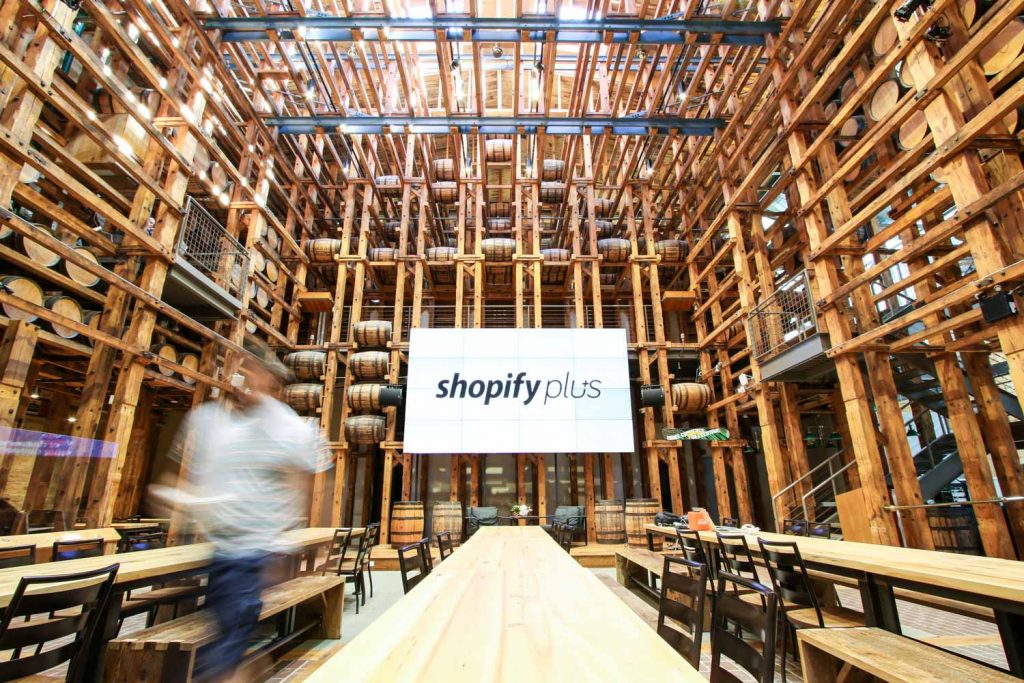 Tobi remains at the helm as CEO working mostly from Ottawa at Shopify’s global headquarters. We had a chance to speak with him during a visit to the recently opened Shopify Plus in Waterloo—in a former Seagram’s 19th century whiskey distillery.

Shopify has made a name for itself in terms of office spaces and culture. I know it’s just not about the perks, but there certainly are perks to being in gorgeous spaces.

I think one of the most important things we are doing is creating environments to work in which are simply surprising. This is the most important thing—they shouldn’t look like where you expect to work. I think what that does makes you want to do your environment justice. It’s very hard to be in an amazing space like this and have a small discussion about like unnecessary things. It’s kind of too inspiring to do that, so there’s power in this environment.

Because is feels more important.

Yeah. You would be disappointed in yourself if you spent 45 minutes talking about something that doesn’t matter. I think this is how people work and so we try to create environments which surprise people enough that they are constantly reminded that creativity is important and thinking bigger is maybe something that ought to be done.

We’ve managed to pull this off in office towers, but there is no way to do it as well as in a distillery; this is completely next-level stuff. That’s why this is such a cool place. 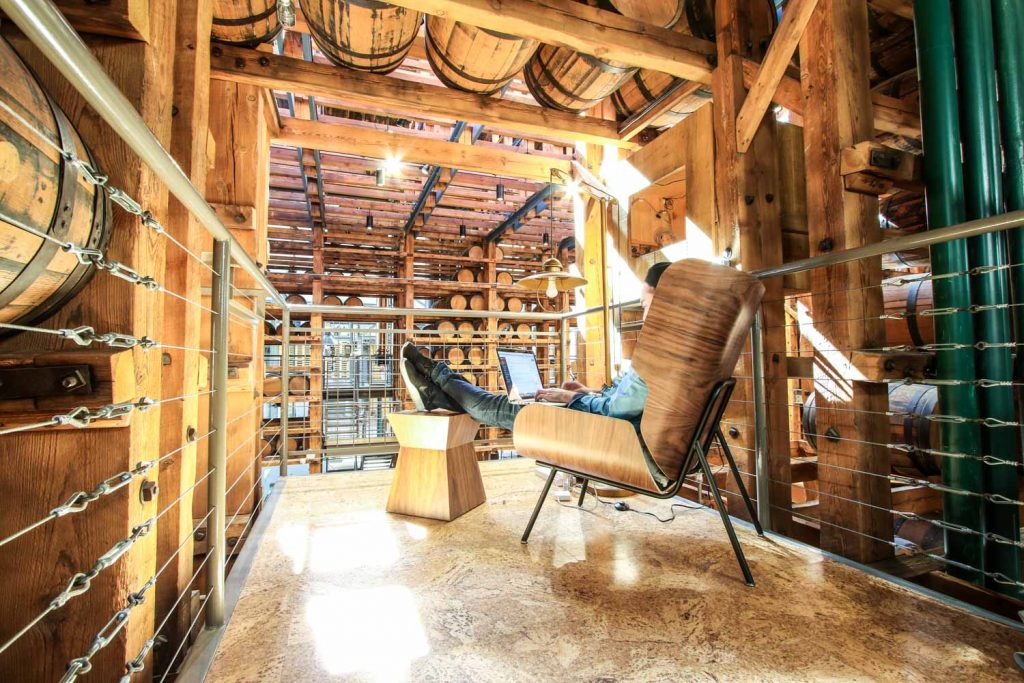 If you just look at a spreadsheet with a budget and say the office line is too big compared to every other company, like why are we always spending on this stuff? It’s very easy to eliminate if you are some sort of MBA, but I think that there is a really direct return on investment in people’s behavior. It’s hard to attribute but I’ve seen it so consistently that I’m a strong believer in it.

The things that people call perks to us are just ingredients to creating an environment that is surprising and conducive to people having this kind of behavior, but it leads to better decision making.

You intentionally hire entrepreneurs to work for you. How is that different than non-entrepreneurs?

I think entrepreneurs become entrepreneurs because it’s the only way for them to be the person they want to be. They kind of create that little piece of space for themselves to work because no one else is willing to give it to them.

There are a lot of entrepreneurs working for Shopify. My executive team is made up of a lot of people who have been CEOs before. When we acquire companies, people stay around for a long time, much longer than is usual in tech. There’s something that activates people with the impact they can have, how many people’s lives they can help, and the recognition they get for the types of work they are doing.

From personal experience as an entrepreneur, you do nine things you don’t want to do to get that one thing that no-one else would ever give you otherwise. If you can just create a company where you get to do that one thing, and probably still one or two things you wouldn’t necessarily choose, I think that is one of the best things.

He was literally the biggest pain in the ass customer I’ve even had. He would say “I had this problem so I think I need a week of no billing”. All I could think was that this guy was paying $40 a month, and I had to listen to all of this and I had to write the code which allowed my systems to even charge something custom just for this one guy. Eventually I just made his account free because I just didn’t want to deal with him anymore (laughs).

A short while after I realized I need people like that at Shopify. I thought, this guy might be a pain in the ass, but he could be my pain in the ass, so that was the beginning of a very fruitful relationship. It was fantastic: essentially everything I’m good at, he was better. I also like to think that with some of my strengths, he was lacking.

You are the last remaining original founder. How does that play into your role?

I think it’s super misguided to talk about me as if I am the reason why Shopify is successful. Not at all. It’s a team effort. There is no single person who has the skill to build this company. It’s a cumulative total of all of us that make up the company that creates success.

I think there is a role to play for founders which is to be a little bit crazy with ambitions, either by being really convincing, or at least being interesting enough that people want to hang around.

I have no idea of which side of this equation that I’m on but luckily, whichever one it is, people are hanging around and you get to work together and become a team. We figure out each others’ strengths, and based on those strengths we change what we do and try to build a product that is really meaningful, that has a lot of value and gives people superpowers who decide to adopt it.

Education and mentorship have been important part of your strategy both internally and externally. Why is that, and how is that shaping up for the future?

This is coming from an obvious place. Dan and I originally embarked on this journey to build Shopify because of a single sentence: Let’s try it because we are probably going to learn a lot. The company exists because it excited us as an opportunity to grow and learn things.

Very consistently we brought people into the company we because, they had this desire to learn. We talk about Shopify as a learner’s company. No one in the company thinks they have some kind if fixed set of intelligence that they bring to bear. Rather if someone is not good at something, then they are not yet good at it. That is a very consistent way of thinking about ourselves and I have to say that’s really an amazing mindset to be surrounded by.

And what about educating Shopify clients?

It’s something that entrenches our product as well; we really feel that almost everyone has an internet business in them, in some way. Everyone has some weird combination of interests and something of themselves to give. We want to encourage people to think about what kind of business that they can build around that.

We also recognize that this is a journey and no one arrives knowing all the answers. But you probably have the capability to understand and learn the things you need to learn right when you need them. That’s why we’ve built things like e-commerce university and Build a Business Contests to sort of encourage people to give it a go with lots of mentorship from fantastic people.

There’s just a deeply rooted belief that this is something meaningful and that we want people to hopefully use Shopify to sort of better themselves in a way.

You now have a family of five.  Have you found a balance between running company while maintaining a lifestyle with your family that it makes sense?

We usually refer to it as work-life harmony. I don’t anyone likes to say work-life balance because then you think 50/50 and that’s just not going to happen. But I am home with my family every day at six and after eight I’m probably going to sending emails again. You just have to make time. On the weekends I’m home – I don’t travel on the weekends so this is sort of how I carve out family time and I’m very diligent about that.

Then again there are benefits to the business too. Just thinking about patience–I think I’m a much better manager because I have children. I’ve learned that there’s a wrong time and a right time to try to teach someone something.

I think every experience one can have somehow teaches you how to be better at the startup thing. There’s literally not a single skill that you have that is not going to come into play in an experience like this, so it’s all good.

What are you excited for at Shopify right now?

I have a l lot of things to choose from. Generally, I say there’s not one thing.

From my perspective, the biggest thing is that we have 300,000 customers. Many of them are very young companies which individually, in the greater scheme of things, kind of don’t matter.

The cool thing is that when someone puts 300,000 nice things together, that becomes formidable. We can advocate as a single entity on behalf of all these small people who, as a community, make up something that is actually larger than Nordstrom or Macy’s. That has never existed in the world of retail­—no one has ever had the position to do that kind of thing, so what we can provide now.

With this power is we can go to Apple, for example, and say we love Apple Pay, we know you are probably already talking to Nordstrom and the Gap about Apple pay on the web, but let us work on one additional API that will allow us to bring that immediately now to hundreds of merchants. To me, everything I’m truly excited about revolves around this idea of being like a union of all the small people, representing them collectively. They then become addressable in a more real way because Apple would never build a custom API for a mom-and-pop shop. I love that and I love the role that we can play there.

This interview has been edited and condensed for clarity.

Entrepreneurship, Family and The Future of Retail with Shopify COO Harley Finkelstein