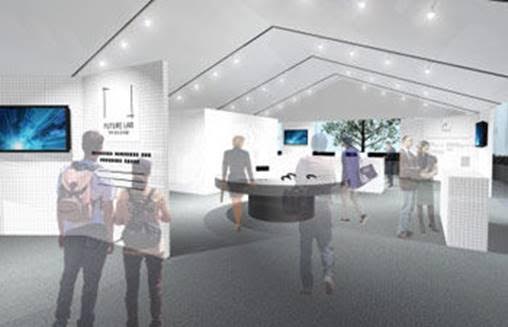 The Future Lab Program embraces an approach to technological research and development that emphasizes an open creative environment and direct lines of communication with society, through which it aims to co-create new lifestyles and user value in the future.

The design for the Future Lab Program concept logo is based on an “F” and “L” motif that resembles a frame honing in on a target. Going forward, additional letters will be added inside the logo frame to coincide with the launch of each new prototype, each of which will symbolize the concept behind these initiatives.

The first project from the Future Lab Program will be showcased at the SXSW Interactive Festival, beginning Saturday, March 12 in Texas. The project, known as “N,” is a concept prototype featuring a hands-free user interface that creates a new way of experiencing audio such as music and sound, allowing the user to receive audio information without having to insert any object into his or her ear. Sony will unveil a number of concept prototypes and technologies, including “N,” at its booth (“Sony’s Future Lab Program at SXSW”) during the SXSW Interactive Festival.