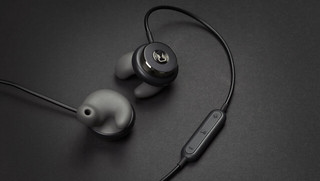 For most people, earbuds are a one-size-fits-all sort of product.

Custom-fit earbuds, molded to the user’s ears, are available but high prices and long turn-around times have kept them out of the mainstream, limiting the market to audiophiles, professional musicians and recording engineers.

“Custom-fit was expensive and time-consuming,” says Daniel Blumer. “The average consumer just isn’t interested in that.”

Blumer is the CEO and co-founder of Revols, a Montreal-based startup that’s developed a wireless earbud that molds to the shape of a user’s ear in one minute and costs significantly less than the traditional options.

Inside the molding tip of the earbuds is a patent-pending quick-hardening gel. It’s activated through an app.

“There’s no other custom fit solution out there where you can just take the earphones out of the box, put them in, hit a button in an app and a minute later you have custom-fit earphones,” says Navi Cohen, Revols other co-founder and the company’s CTO.

Three days after launching a crowdfunding campaign on Kickstarter, Revols had raised almost $500,000, five times its original goal. The campaign runs until Jan. 8, 2016.

“We did this because we believed in this and we thought people would like it and that’s why we dedicated the past year-and-a-half, did we think it was going to do this well this quickly? Personally, I didn’t,” Blumer says.

It was an important move.

“As a hardware company, you know its inevitable, at some point you have to make the trip over to China,” Cohen says “You never really know what you’re getting until you, number one, see what the facilities are and create that relationship with the manufacturer directly.”

It would have been a lot harder without HAX, Cohen says.

“As a startup, figuring out how to navigate that, where to start, who to talk to, how to get to China, where to go, is a huge, daunting task,” he says. “HAX has that down, they know how to do that.”

It was through HAX that Cohen and Blumer met – and ultimately formed a partnership with -Onkyo, a Japanese consumer technology brand known for audio equipment.

Engineers from Onkyo helped the Revols team develop the audio components of the earphones.

Currently, backers can get a pair of Revols earphones for $199.