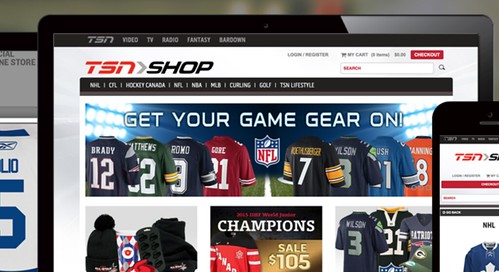 “It was weird for me. Having run an agency for over a decade, it was weird for me to do things again that I already did. Getting out there I realized, ‘I need an accounting system. I need accountants! I need a system to track my clients,'” he recalls.

Luckily, with the help of a great team and his own expertise, he was able to create the London-based Olio Digital Labs, a well-known web development and e-commerce agency that works with top brands across Canada.

“It felt like I was really hitting the reset button on my career. It was taking a step back to take two steps forward,” Farr-Gaynor says.

After struggling to define their niche, Olio was able to build a platform of notable clients that continues to grow. The list includes Home Depot, Walmart, MLSE, TSN, Staples and more. For the majority of their clients, their role is to develop solutions that allow backend operations to carry through as smoothly as possible. However, they also create graphically-rich e-commerce platforms, a branch they’re hoping to expand on.

“I think every digital agency struggles with that – identifying what sets them apart from their competition,” said Farr-Gaynor. He goes on to say that what sets Olio apart is not necessarily the services they offer, but the projects they’re interested in taking on.

“I knew that we wanted to work on exciting, different, mission critical applications,” he explained.

Farr-Gaynor has a background in multimedia design and has worked in web and application development since graduating from Durham College in 2005. Currently, Olio has a staff of five and is looking to expand in the coming months.

Farr-Gaynor believes they’ve been successful partially because of their ability to understand the concerns of their clientele. Olio primarily serves as a contractor and aims to meet the individual needs of any company looking to improve their digital space.

“We’ve gotten really good at understanding the language and business process of certain industries. I think you have to be brutally honest when dealing with these companies.”

The business currently features the e-commerce platform they developed for Mustang products on their website. Mustang Products is a main supplier of licensed sports products in Canada including leagues like the NHL, Hockey Canada, NFL and MLS. This fall, the agency is partnering with Bell Media to launch the French version of TSN’s online shopping division.

In the backend, the agency works with several undisclosed retailers to bring their digital platforms “up to the 2015 level,” said Derek Silva of Olio. The team explains that the problems faced by small companies are also faced by large companies on a grander scale. That’s where they come in.

“If you took two retailers, you have two companies that from behind the scenes run on completely different platforms. At the end of the day, they both want an e-commerce solution. That’s where we come in. We know how to make databases talk to each other.”

Olio has also done promotions with Toronto-bred superstar Drake and the OVO brand (October’s Very Own). All in all, Olio provides a wide range of customized services for clients.

Olio Digital Labs will be attending TechFest London this year as they’re looking to double their team in the coming months. Though Farr-Gaynor describes their growth as being “behind the firewall space,” the team suggests that retail consumers may already be seeing more of their work than they realize.

This team is behind the scenes of the Canadian tech scene. Notice an improvement in your favourite store’s website. Olio says, “There’s a good chance we did it.”