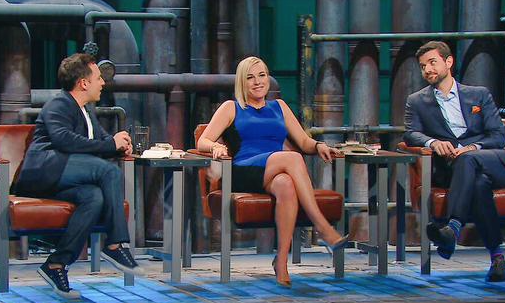 Her online marketplace, Toddly, is dedicated to selling pre-owned kids gear and furniture.

“This is just a hobby. I don’t like your evaluation,” said Harley Finkelstein, before he uttered the phrase made famous by CBC’s original Dragons. “For that reason, I’m out.”

These weren’t the dragons we’d come to know and love, but Harley Finkelstein, Michael Hyatt and Nicole Verkindt, three of Toronto’s most revered startup veterans, have something to prove.

Next Gen Den is the CBC’s original spinoff of Dragons’ Den, featuring the Harley Finkelstein, the Chief Platform Officer of Shopify, Nicole Verkindt, the founder and CEO of Offset Market Exchange, and Michael Hyatt, chairman of BlueCat. The series will air online in short segments as part of the CBC’s new digital initiative.

The setup is similar to the CBC original. The studio is embossed with intense lighting, large concrete pillars and three ‘dragons’ towering over nervous founders hanging what may be their life’s work out to dry. There’s one fundamental difference between the pitches being heard today and what Dragon’s Den fans have grown accustomed to; these startups deal primarily in the tech or digital space, or are looking to move in that direction.

The scene erupts into what could easily be mistaken for a bidding war – numbers are flung across the room that are forgotten and replaced in minutes. Before anyone has a chance to look away, hands shake and goodbyes are briefly said. As the screen fades to black as Finkelstein sighs, “The best thing is to be honest and shut it down as fast as possible.”

The businesses presented here today are far earlier in their journeys than those presented on the well-known TV show and speak specifically to the Canadian startup space. Episodes of Next Gen Den are only a few minutes long and showcase only one pitch. CBC is currently filming the second season, which happens over the course of two days, during which multiple pitches are presented.

The pitches are entertained thoroughly, each given enough time to explain their idea and hear from the dragons themselves why or why not these proposals are viable.

After the filming is complete, Hyatt gives a little more insight into what peaks his interest and what doesn’t.

However, he wants to feel, when he invests in a business, that the founders respect his money. He describes it as a red flag to incorrectly evaluate your business or be unable to articulate what problem a business idea solves.

Though they may not be the originals, these dragons have their own stories to tell. After earning his JD/MBA, Finkelstein worked for a year at a Toronto law firm before joining what’s now one of the city’s fastest growing tech companies: Shopify.

“I think I’m probably taking a bit of a different approach to this whole dragon’s den thing than the rest of them,” laughs Finkelstein.

“I’m an entrepreneur at heart. I’ve been an entrepreneur since I was 13 or 14 years old and I help run this really great company called Shopify. What I love doing, what my hobby is, is I love helping other entrepreneurs. So the fact that I can meet dozens of entrepreneurs in a two-day span of filming Next Gen Den? That was the reason I got involved in the first place.”

The Bluecat chairman also got an early start. While still a student at Western University, Hyatt founded Dyadem International. Hyatt is just as intrigued with Canadian millennials and the dynamic digital community they’re creating, and hopes they’ll alert the rest of the country to the earning potential of the tech sector.

However, he won’t invest in a company that he doesn’t feel respects his money.

“I grew up with no money and I made my money, so $50 thousand to me is a lot of money still. I buy my underwear at Winners and when I go to Loblaws and pasta’s on sale, I buy four boxes. If someone asks me for $50 thousand and they act like I should just throw in the money, I want to ask, why don’t you just throw in $50 thousand? I want to feel like they respect my money.”

After creating a prototype for a timer that turns off a hot straightener while still attending Western University, there was no stopping Verinkdt, who went on to develop a Canadian marketplace designed to connect businesses in the international defence, aerospace and security industries. She’s referred to by her fellow dragons as the “market queen” several times throughout the pitching segments.

Fast forward to today and Offset Market Exchange founder Verkindt, has some advice of her own for Canadian founders. Don’t spend too much. Don’t give up too much.

“My two things are, be scrappy. Don’t deploy a lot of funds. You can start a tech startup now with a really low amount of money,” said Verkindt.

“Don’t give away all your company to dragons,” Verkindt says half-jokingly. “I think you have to have enough traction and revenue that you’re not going to get killed on evaluation.”

Verinkdt insists that Next Gen Den is the future of startups and a great edition to the original CBC hit.

“We’re now in a day in age where people have shorter attention spans. Now we’re talking Youtube, we’re talking single pitch episodes. We’re talking distribution on the web. It’s shareable and it celebrates young entrepreneurs which is a great thing to celebrate.”

The dragons of Next Gen Den each bring something unique to the series. However, despite their enthusiasm for guiding young entrepreneurs, they all emphasize that not every idea is worth a handwritten cheque.

First and foremost, they invest in the people behind the product, agreeing that it’s passion, conviction and a willingness to get your hands dirty that turns their heads.

Oh, and make sure you have your numbers right. Otherwise, rather than acquiring a deal, you’ll hear the words every entrepreneur dreads; “And for that reason, I’m out.”