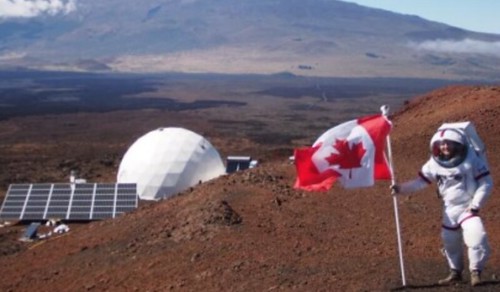 “It always ended up feeling like we were having a birthday party or holiday party where no one showed up,” says Jocelyn Dunn at the Wearable Technologies Conference in Toronto, which featured 25 speakers. Dunn is referring to the isolation her and the rest of the HI-SEAS Mission III team faced during an eight-month simulation of being on Mars.

In this case, Mars was on northern slope of Mauna Loa in Hawaii. Elevated 8,000 feet, this harsh landscape helped the small team of six simulate the real life stress and isolation that would be experienced if a team was sent to mars. Tracking the stress and other biosignals of the team members is where wearable technology came in.

“Wearables in space are absolutely necessary in some ways,” says Dunn, who feels that wearable technology can also help create a sense of augmented reality that lessens the severity of isolation and confinement.

Two of the wearable products used during HI-SEAS Mission III were the Jawbone UP wristband, worn 24/7 by the team, and Hexoskin biometric shirts used during workouts. Both these devices were used to track the physical health of the team members.

“If we can automatically detect the health and stress states of astronauts,” says Dunn, “then we can develop countermeasures to improve crew performance and reduce mission risks.”

But even though these products were used for an experience that most wouldn’t be able to fathom, Dunn says many of the wearables developed for space have practical uses on Earth too.

“The technology we develop for space has spinoff applications on Earth,” says Dunn. Many wearables that are developed for space are often found in hospitals, particularly in portable medical equipment.

Christian Stammel, CEO of Wearable Technologies, also sees wearables having a huge impact in the medical world. “Not only is there growing consumer interest in these products but they can assist to improve people’s lives,” says Stammel. “For example, wearables can give a lot of freedom back to people with chronic diseases. Patients who have to go to the practice or hospital regularly can wear wearables to reduce the number of visits to the doctor considerably.”

While many wearables, like the ones Dunn used during the mars simulation, may not be something that the average person would ever use, wearables are becoming increasingly popular.

“Smaller, smarter, sexier is what we we predict for the future wearables,” says Stammel. “Products will be considerably thinner and less obtrusive.” Stammel says that almost every tech company is adding a wearables to their roster, the most popular being wristband devices. In fact, the Jawbone UP wristband used in the Mars simulation is a popular wearable device for fitness buffs.

Dunn feels that these wearable devices have benefits for all, and can generally improve the quality of people’s life.

“This research is toward monitoring and managing the stress and exhaustion of astronauts to improve mission performance, says Dunn. “In general though, developing these stress management technologies is helpful for everyday citizens as well.”