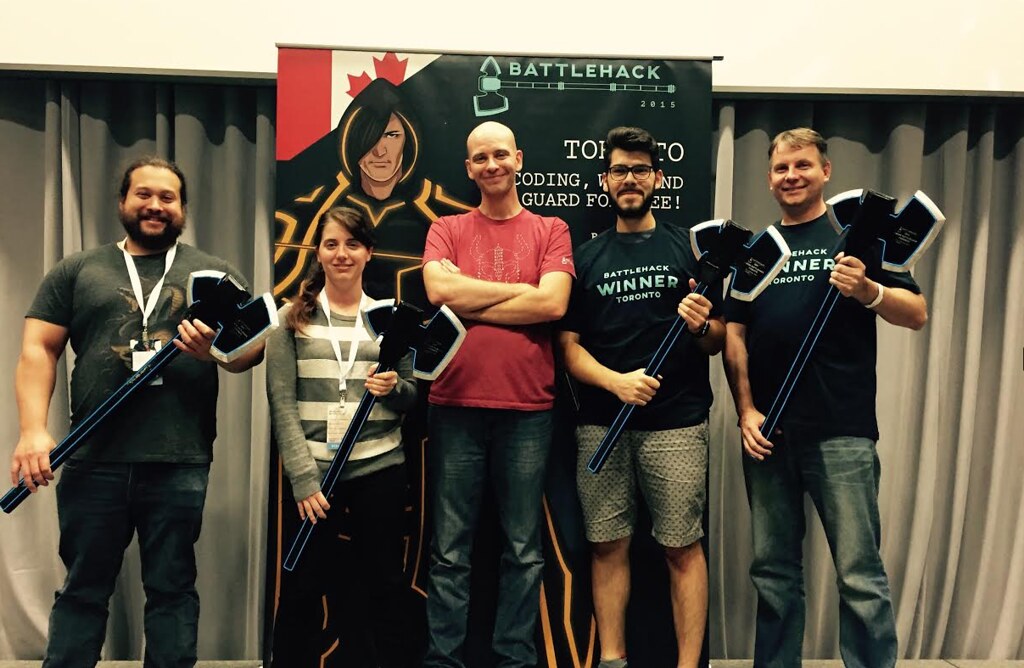 After a weekend of continuous hacking, the winners of this year’s BattleHack in Toronto is team Not Me, for creating an app that prevents account theft and protects your online information.

The city-wide competition hosted by PayPal and Braintree is a 24-hour event held in Toronto’s Mars Discovery District. BattleHack visits 14 cities worldwide where developers are tasked with building a mobile application that solves a local problem of their choice.

The Not Me team, who won first prize in Toronto last year under the name Team Angry Kitten, will be heading to the PayPal headquarters in Silicon Valley for the BattleHack World Finals with other regional winners to compete for the $100,000 (USD) grand prize.

“The entire purpose of BattleHack is to find the best hackers on Earth. Everything that happens in Toronto is just a mass of inspiration for the technical community,” said host and judge Jonathan LeBlanc, head of developer advocacy at Braintree and PayPal.

In addition to their entry to the World Finals, team Not Me also received the famous custom-made BattleHack axe trophy.

The winning app recognizes if someone is attempting to access a user’s online account or personal information without permission and notifies the user through email and text message. By integrating Braintree’s SDK, Not Me allows users to pay for the protection service with PayPal or a credit card of their choice.

The Not Me team believes their app provides a solution to security threats that impact a large number of Internet users.

The five judge panel based their decision off of idea quality, how well the app incorporated the PayPal API, Braintree, or Venmo SDK’s, and for overall execution and user experience.

The goal is to build everything within a 24-hour period using any breed of code, but must integrate PayPal as the sole payment method.

“At the end of the day you’re building an app that fixes a problem that you have. Those are the best hacks because there’s passion behind it,” said LeBlanc.

In second place, team While I Brush built a smart toothbrush holder with a built-in video display that plays while you brush your teeth. They received an XBOX One.

Team OpenMD, the third place winners, built an app that allowed doctors to easily collaborate on patient cases by getting real-time medical feedback from patients while they are at home. They received an Adafruit ARDX v1.3 kit.

The hacking began Saturday afternoon when the gong struck at 1 p.m., and carried on for 24-hours. During that time, participants were treated to free food, many giveaways, nap stations, and late-night massages.

The winnin team from Tel Aviv took home the $100,000 grand prize for their app, AirHop, a collaborative consumption app for consumers to share carrier or Wi-Fi access.

The global BattleHack 2015 series began in January in Melbourne and will end after the world finals in November in San Jose, CA.