Canada’s technology sector is strong, but to continue that pace the next generations will have to maintain a vested interest in coding and developing while also placing an emphasis on diversity and inclusivity.

A new first-of-its-kind study from Actua looks at the confidence and attitudes of not only parents but kids as well, in regards to coding and the jobs of the future. The results are positive in the sense that there is a largely enthusiastic segment for children and parents engaged in programming and developing, but there is an identifiable gender and socio-economic divide as well as a lack of opportunities to currently learn coding inside and outside Canadian schools.

“We know that we have a generation of enthusiastic users of new technology like smartphones, texting, video gaming and social media,” says Jennifer Flanagan, CEO and president of Actua. “What we were seeking was a better understanding of their attitudes and interest about future careers in coding and programming and their access to learning opportunities.”

The study surveyed 1,500 young Canadians and their parents and asked about their attitudes and interest in digital technologies, whether it be around education or a possible career.

There is an obvious awareness surrounding the importance of keeping up with technology, as nine out of 10 parents and children believe that knowing how to use digital technologies will be important for future careers, and seven in 10 believe coding to be integral. 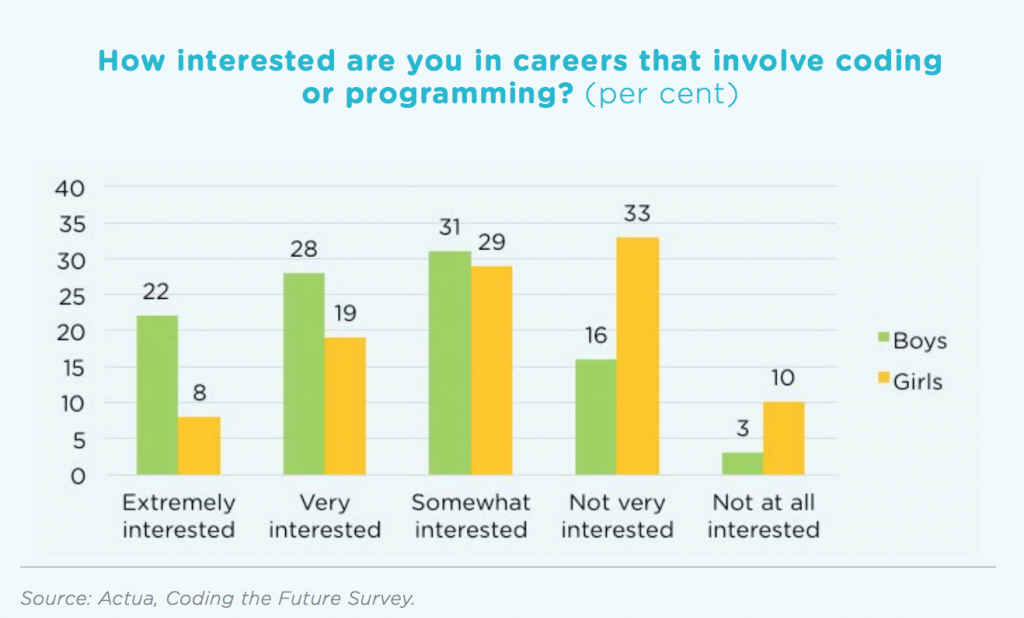 Still, despite the gap in career interest, both genders are more or less equally confident in their ability to use digital technologies, which means the answer may lie in exposing children to coding and programming at an earlier age and demystifying the process behind it all. This is shown through more findings that—despite the equal gender-split confidence in digital technologies in general—girls are still less likely to believe in their coding abilities, with 16 per cent of boys saying they are not all confident, while 31 per cent of girls say the same thing.

“We have to do better for our girls,” says Flanagan. “Through access to coding in schools and workshops and by promoting female role models, we can begin to break down the persistent gender barriers that still prevent girls from actively seeking opportunities in the most important skills area for jobs of the future.”

When it comes to offering chances to learn code, both a geographical and socio-economical gap is evident. The chart below shows those who make more than $100,000 a year have much more access to schools that teach or offer coding than those who make $40,000 or less—38 per cent and 24 per cent respectively. 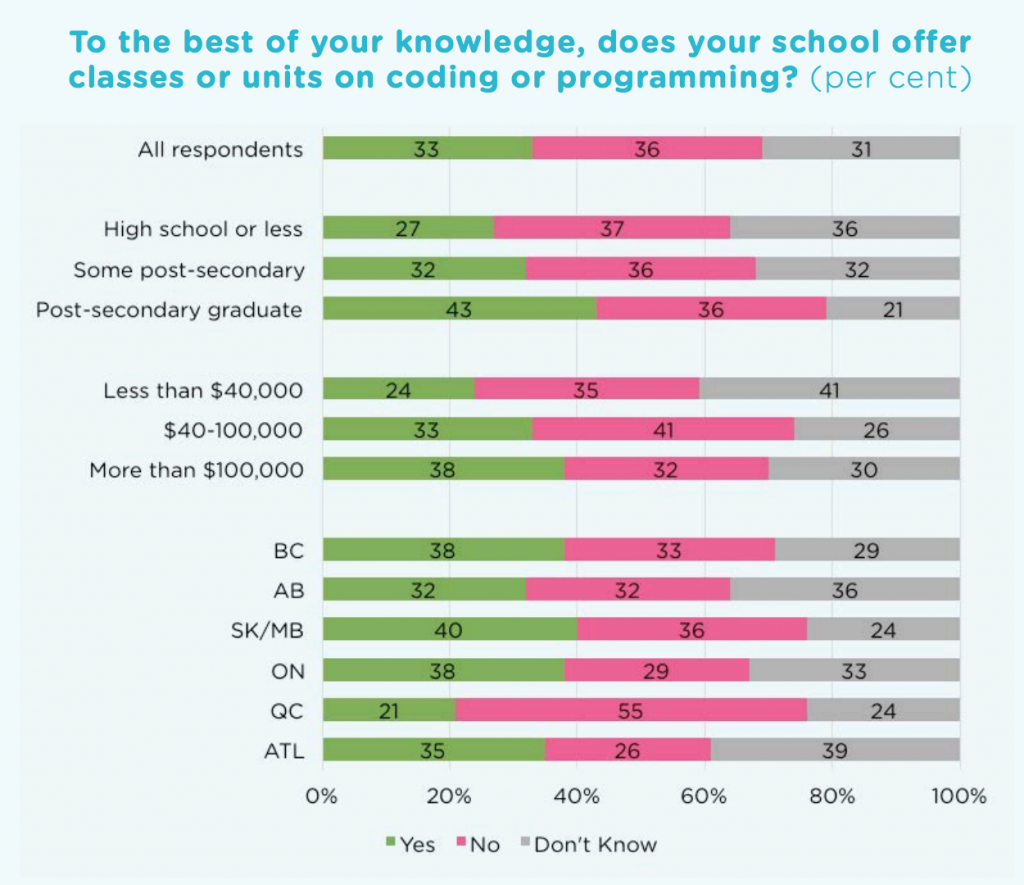 In addition, residents of Quebec have far less access to schools with coding access than the rest of the provinces, as only 21 per cent of respondents said their Quebec school offers classes or units on coding, compared to 38 per cent for both B.C. and Ontario.

In total, more than 50 per cent of Canadians want more opportunities to learn how to code. It’s obvious that younger generations and their parents recognize the value in learning code, but not everyone has the best access to educational resources. The obvious conclusion to draw is to offer more coding classes, but it falls deeper into actively trying to bring these services to girls and those in lower income brackets.