The U.S. may have unicorns to describe their most valuable companies, but Canada has another horned animal to associate their own with, and this one is far less mythical.

The Impact Centre’s second annual Narwhal List has been released, detailing some of Canada’s most financially attractive private tech and healthcare companies. The term “narwhal” is a play off unicorn, a designation coined by VC Aileen Lee given to startups that have crossed the billion dollar valuation mark.

“The intention of the Narwhal list is to focus on the ability of firms to scale up and reach world-class status,” the report reads. “The ranking system is derived from publicly available information and is capable of tracking all firms in the country—not just those that elect to participate by revealing private revenue data.”

The ordering of the list is compiled by what the Impact Centre calls “financial velocity,” defined as “the amount of funding a firm has raised divided by the number of years it has been in existence.” The list features some of the most recognizable companies in the country.

The Narwhal Top 10 takes companies from both the healthcare and tech industries and ranks them collectively by financial velocity. That list is included below, topped by three consecutive healthcare companies: BlueRock Therapeutics, DalCor Pharmaceuticals, and Repare Therapeutics. The first tech company, HootSuite, comes in at fourth. 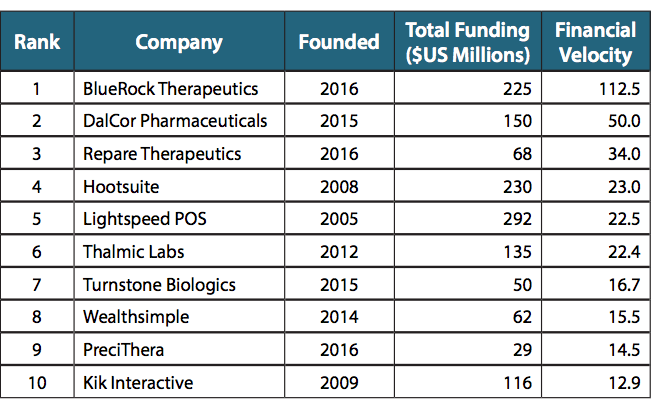 In comparison, Uber is the top unicorn in the U.S. with a financial velocity of 1,679.

Three companies (Real Matters, Clementia Pharmaceuticals, and Zymeworks) from last year’s Narwhal list went public so they are no longer included. Also, compared to last year’s list, Canada has almost doubled the number of companies that are on track to become unicorns in the near future.

Another metric used to measure the growth and value of a company is employment velocity. It is compiled by measuring the number of employees a company hires per year since their inception, “thus reward[ing] long-term growth in employment and not momentary surges that accompany financing events.”

Many of the healthcare companies had significantly lower employment velocities than that of their tech counterparts; the second company on the top Narwhal List, DalCor Pharmaceuticals, only hires on average one new employee per year. According to the list, DalCor only has two employees total; Wattpad has 2057.

In terms of where the narwhal companies are located, the Greater Toronto Area dominates, with 24 total startups calling the area home. Greater Montreal is second with seven, and Vancouver is third with six.

The report ends by pointing to a sense of “cautious optimism” for Canada’s technology space.

“Although we have made dramatic progress and have continued to leverage our investments in startups and incubation, our analysis suggests that we have significant work ahead of us,” the report reads.

The Impact Centre compares the narwhals on the list with a financial velocity of $10 to $25 million to similar U.S. unicorns, showing that companies south of the border have raised nearly double the amount of capital per firm ($105 million for Canadian companies as compared to $202 million for U.S. ones). Based off that, those Canadian companies must raise an additional $100 million in capital if they hope to achieve unicorn status.

“The sheer difference in scale between investments available to technology firms here and the US is a stark reminder that we have to be significantly smarter about how we nurture and invest in Canadian technology companies,” the report concludes.