Initial coin offerings (ICO) are seeing a boom in popularity and new data shows a lot of that interest is coming from Europe.

Almost half of the money put into newly issued cryptocurrency tokens has originated from Europe, according to a new report from Atomico, one of Europe’s leading venture capital firms. The report uses data taken from TokenData.

The findings show that since 2014, European entities have raised $1.76 billion USD through ICOs, representing 46 per cent of the worldwide total. Although the data reaches back a few years, almost 90 per cent of all ICO activity has taken place in 2017, encapsulating the massive interest in blockchain and cryptocurrency that has come about only recently.

An ICO is essentially a method of crowdfunding for a new company by creating and selling a new cryptocurrency token, often based in Ethereum. That token will rise and fall in value and holders can try and sell to make a few bucks when and if it has matured.

Trailing behind Europe in terms of ICO activity is North America and Asia, with the former drawing in $1.08 billion worth of activity and the latter seeing $453 million. North America represents 28 per cent of the global ICO activity while Asia is about 12 per cent.

ICOs in Switzerland represented nearly half of Europe’s totals, seeing a total of $828 million go towards new tokens in the region. This is due to several low-tax municipalities in the country like Zug being home to many commodity traders.

It can be hard to track funds though as differences in regulatory frameworks mean that one in four ICO projects are legally registered in a different country to that of its CEO or founder. The totals for each country are often comparable, except for Switzerland—that $828 million worth of ICO capital in the country is impressive, but only $104 million was raised by Swiss CEOs or founders. The chart below details the ICO amounts raised by those within the actual country. 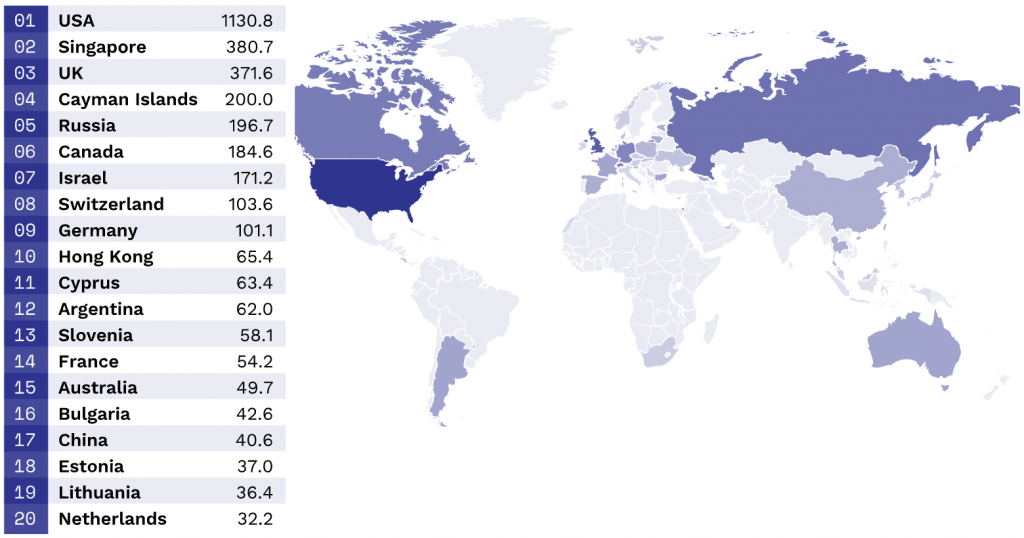 The U.S. dominates the charts in terms entities raising ICO dollars within the country. This includes recent huge token sales like Filecoin and Tezos, who collectively raised close to $500 million themselves just through their ICO. Canada is sixth on the list with only $171 million raised. Singapore is second and U.K. sits at third, but even combining them together does not come close to the U.S. total.

The report indicates that even though some large venture firms both in Europe and North America have begun to take notice of ICOs—including Andreesen Horowitz—even more will enter the market in 2018. Although this could change as regulatory committees begin to address the fundraising method. China and South Korea have already banned ICOs and tough restrictions could be in place for the U.S. and Canada soon.

ICOs are definitely controversial though—recently, the Canadian company Kik Interactive raised close to $100 million through their token sale, but didn’t even sell in their own country due to regulatory shortcomings. Another company called Confido raised $375,000 in an ICO then vanished.