The tales of lost fortunes are shifting from hidden treasure chests to misplaced hard drives and forgotten keys.

Cryptocurrency—specifically Bitcoin—has risen in both value and notoriety over the past year, but a huge chunk of what’s already out there to own or purchase has disappeared forever, according to new research from Chainalysis. The digital forensics firm reports that between 2.8 million and 3.8 million Bitcoins are gone for good, representing between 17 and 23 per cent of total available Bitcoins.

Considering one Bitcoin is worth $9,700 USD at the time of writing, that means there is somewhere between $27.1 billion and $36.8 billion worth of the cryptocurrency that will more than likely never be recovered.

Many have speculated about how much Bitcoin is truly lost, but this Chainalysis research is important due to their empirical methodology. They studied the actual blockchain where all Bitcoin transactions are recorded and came to their conclusion based off several factors including age and transaction activity. 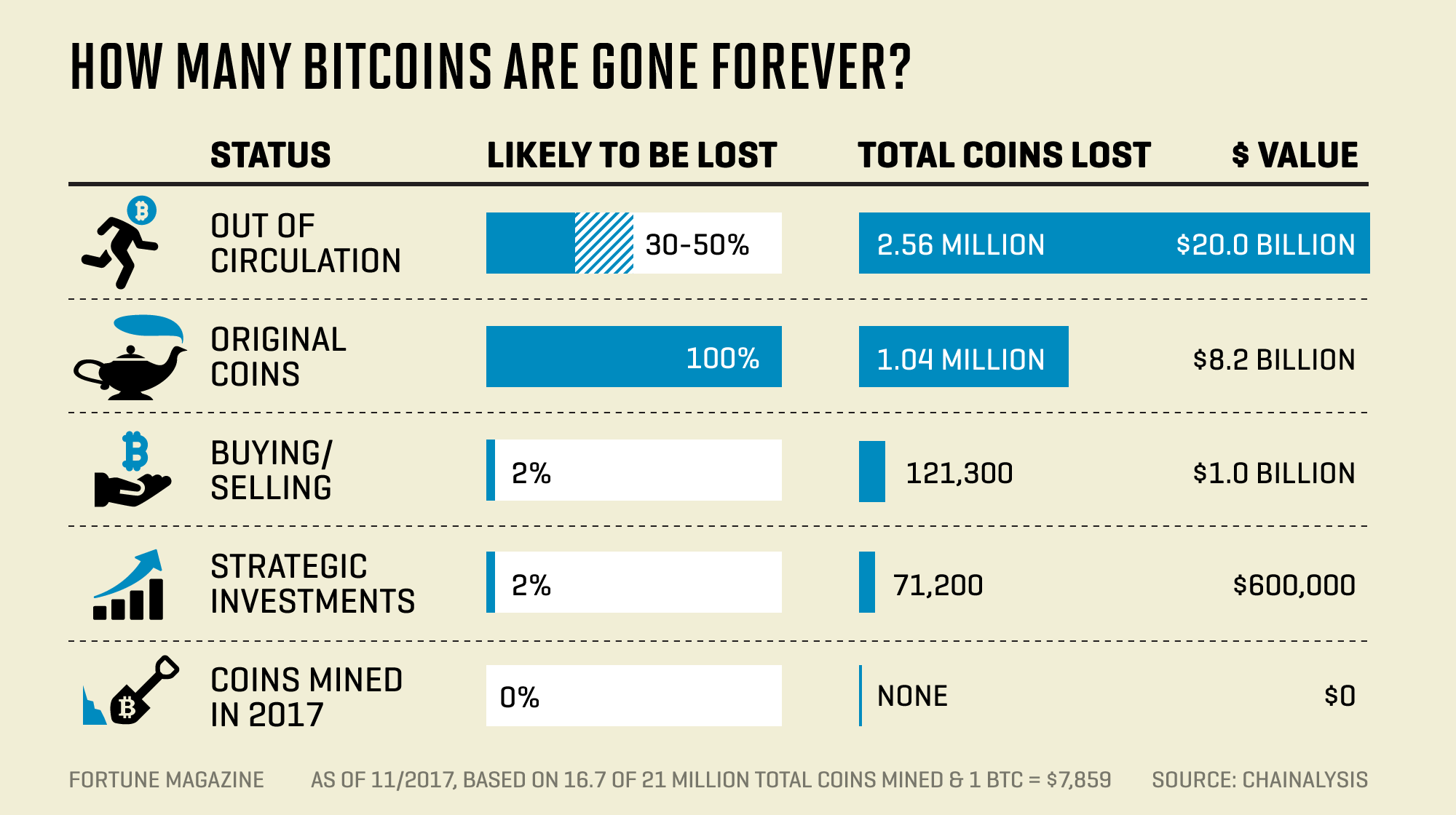 To explain the graph a bit more clearly, the coins mined in 2017 represent the Bitcoin created this year—so there is a very small chance any of it is missing, considering its value and the amount of information now available on how to secure and hold it. Strategic investments and buying/selling just mean those who have transacted or held their coins over the past couple of years, again a small amount.

The big chunks to look at include the “out of circulation” coins, which in the graph represent the high estimation of total lost coins. These are Bitcoins that were mined from two to nine years ago, where people have forgotten login codes or simply don’t remember they existed. Those account for over 2.5 million Bitcoins and are worth about $24.25 billion collectively.

Finally, the original coins, or the “Satoshi” coins, named after Bitcoin’s mysterious creator who made and still potentially owns just over one million Bitcoins before he disappeared in 2011, are considered lost by Chainalysis. It’s hard to say whether these coins are truly gone, but they have not been involved in a transaction since the creation of Bitcoin and currently sit at a worth of $10 billion. No one has ever met Satoshi either, so it’s possible he goes by another name, is a group of hackers or developers, or doesn’t exist at all.

Bitcoins will continue to be lost, but now that their worth is skyrocketing and the public is paying more attention, new and old owners will be more diligent with their cryptocurrency supplies. It’s also not feasibly impossible to recover lost Bitcoin, but it is incredibly difficult.

There will only ever be 21 million Bitcoins in existence, and right now there are currently 16.7 million floating around out there. Mining has become incredibly difficult, as warehouses stocked with computers and electricity bills pushing $40,000 a day are now necessary, compared to the time when all it took for Satoshi to mine 50 Bitcoins in one day was a single laptop.

Bitcoin’s price may fall soon as well, considering it has grown in value over 1,000 per cent this year alone. But looking at how the most important cryptocurrency is held, lost and transacted with will offer both serious investors and interested onlookers the chance to understand decentralized currency even more.