Netflix has taken binge-watching to another level with a trend it has coined binge racing—finishing an entire season of a show within 24 hours of its release.

The streaming service has mostly eliminated the cyclical week-long wait for a new episode to air, sparking a new way for Netflix users to devour a series. And it turns out Canadians are the world leaders when it comes to binge racing, according Netflix’s latest data.

At 11 per cent, Canada has the highest percentage of 24-hour finishers in the world. They beat the United States, Denmark, Finland and Norway—the next top four countries.

More specifically, Atlantic Canada is where most of these fast streamers originate, with Newfoundland as the top binging province, followed by New Brunswick and Nova Scotia. The most-binged show is the Nova Scotia-based mockumentary the Trailer Park Boys. The next most popular are Gilmore Girls: A Year in the Life, Fuller House, The Ranch and Marvel’s The Defenders.

In total, 8.4 million Netflix users have binged a show on the streaming service since 2012, a number that’s grown year after year. Binge racing grew from 200,000 members in 2013 to more than five million as of September 2017, increasing more than 20 times over in just four years. The streaming service currently boasts 109 million members worldwide. 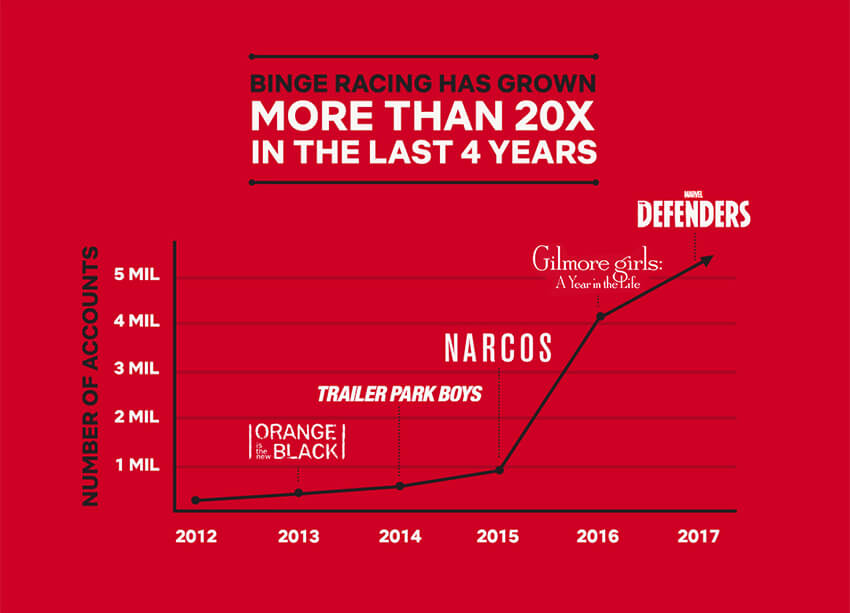 Brian Wright, Netflix’s VP of original series, said that speeding through a series in less than a day is a feat that users find prideful.

“There’s a unique satisfaction that comes from being the first to finish a story — whether it’s the final page of a book or the last, climactic moments of your favorite TV show,” said Wright in a release. “Netflix allows you to watch in a way you never could before, and there’s nothing better than seeing a show engage our members and ignite a passion for viewing.”

Nearly a decade since Gilmore Girls’ finale, Netflix reported the highly anticipated four episode follow up to show garnered the most global racers in its 24-hour debut. Netflix also found that a binge racing super fan in France has finished 30 shows in under 24 hours this year alone.

This data follows Netflix’s recent announcement that it’s taking a big bet on Canada, committing $500 million to produce original Canadian content in the next five years.