The Capital Factory calls itself the center of gravity for entrepreneurs in Texas and in its ninth year of operation, the nickname rings true. More than just a coworking space with free coffee and wifi, the downtown Austin incubator is an entire ecosystem where more than 1,000 members and 400 technology startups connect, share ideas and work in an open and collaborative environment.

Joshua Baer launched Capital Factory in 2008, but by no means was this his first company. Baer has been building tech companies for more than two-decades, even before the dot-com boom. The ecosystem has certainly evolved in that time, but Baer’s early connections are still essential to his success—and that is a key driver behind the whole Capital Factory concept.

The incubator gives entrepreneurs both the working space and resources to spin a business idea into a startup. The technology space and accelerator introduces early-stage companies to mentors and investors, along with future team members and even customers.

Capital Factory has a roster of 165 technology leaders and mentors available to give budding entrepreneurs advice and guidance. 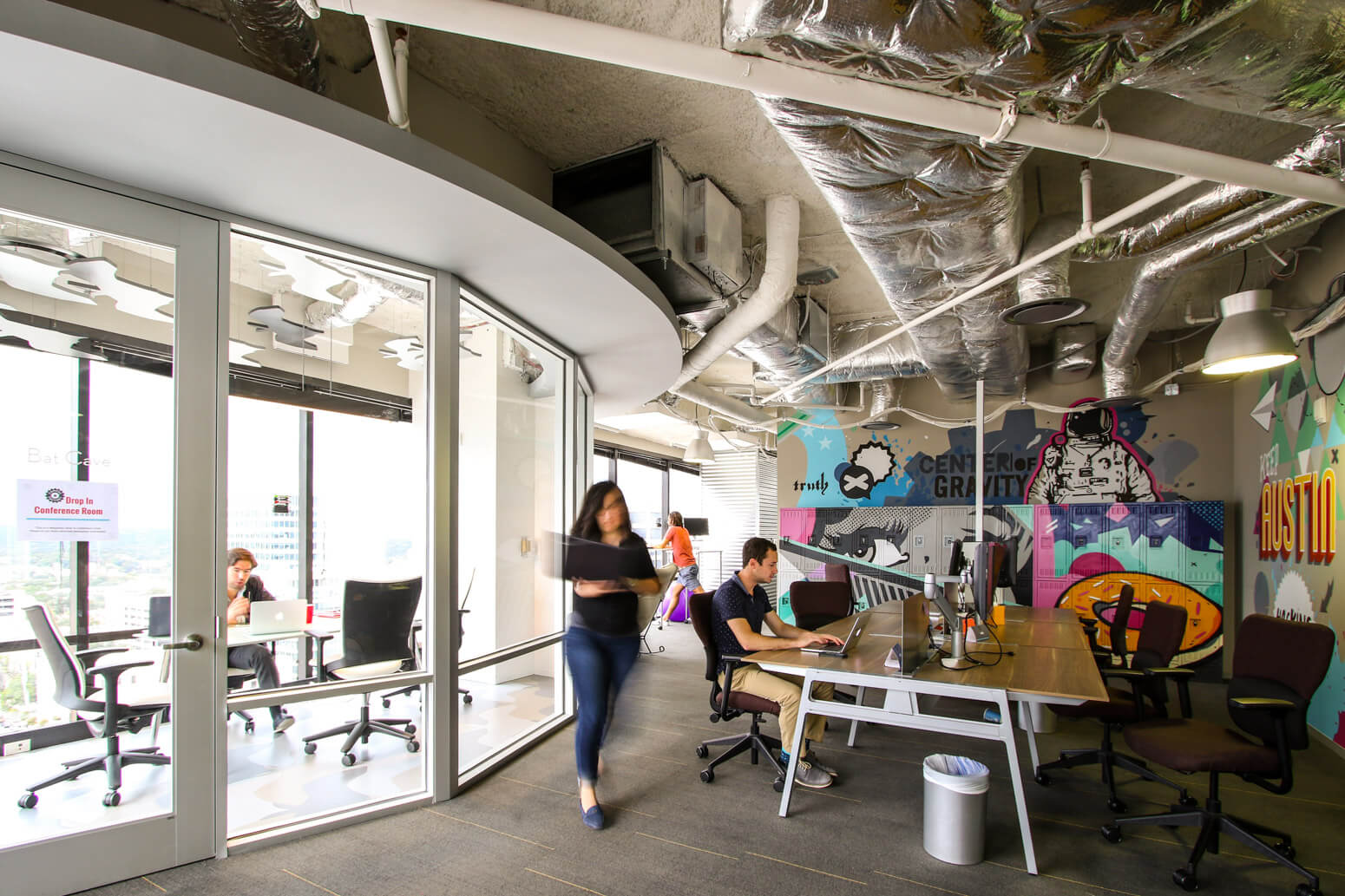 Offering stunning views of downtown Austin, the 5th and 16th floors feature mixed workstations. Grab a chair at a table or settle into a giant beanbag. The space accommodates teams and meetings of all sizes in boardrooms, call rooms and everything in between. Local street artist Mike “Truth” Johnston brought Austin’s culture indoors with graffiti murals scattered around the floors. 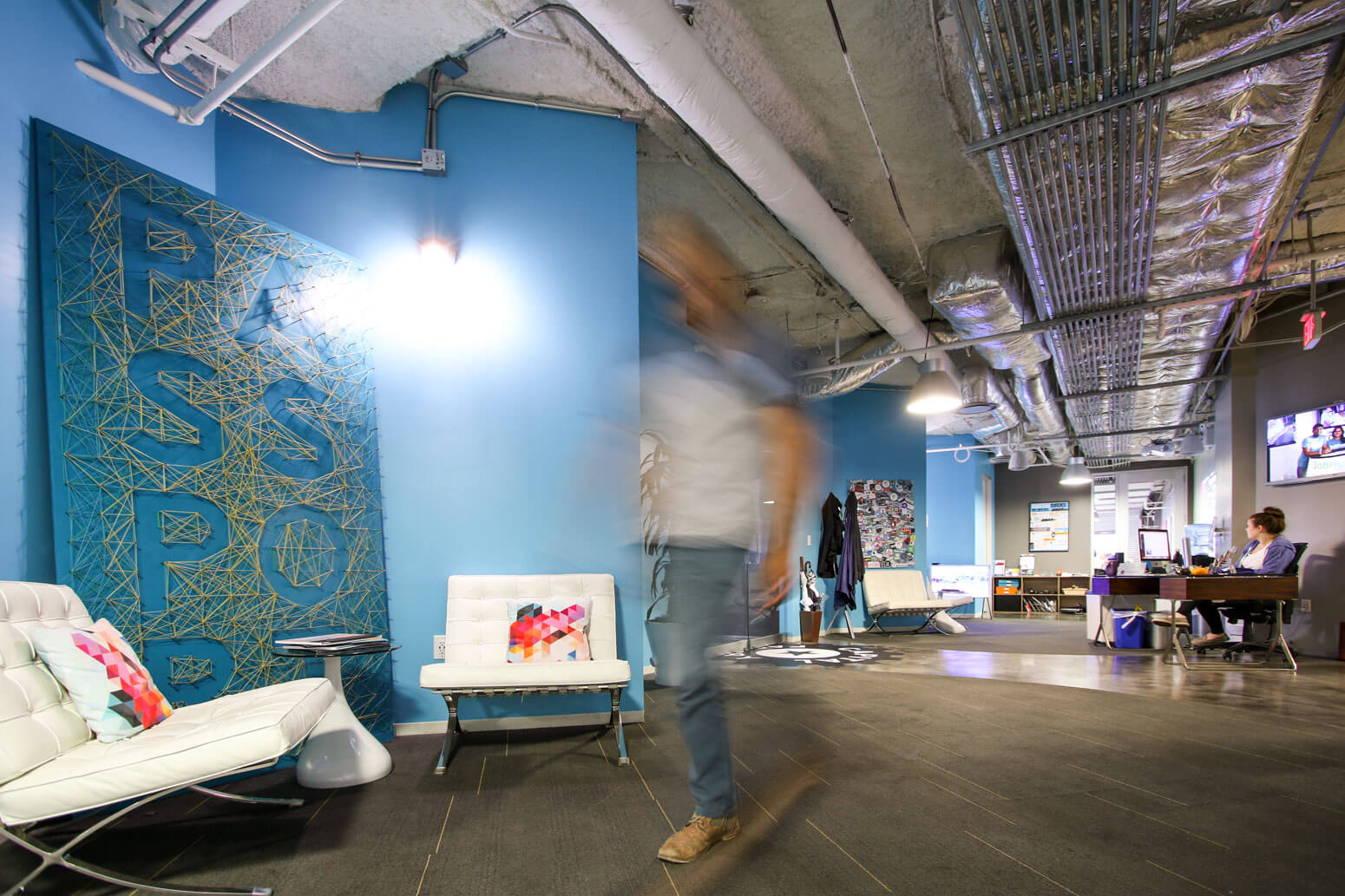 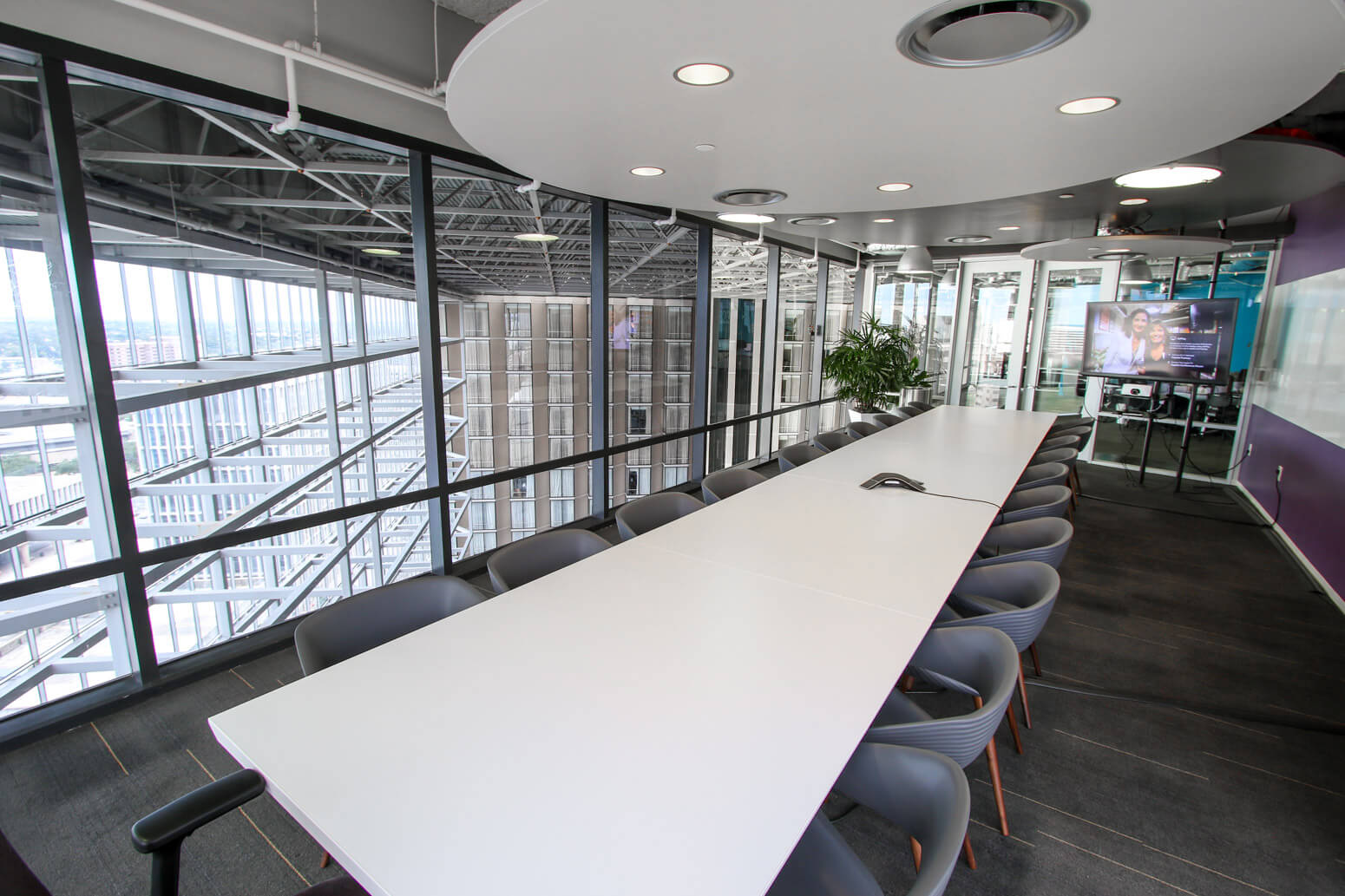 Members have 24-hour access to the two working floors that accommodate a couple hundred entrepreneurs and workers.

The 1st-floor space is the newest addition to the Capital Factory—added in November of last year—and serves as the incubator’s very own VR lab. On the ground floor, the arcade boasts half a dozen stations hosting VR, AR and mixed reality experiences. 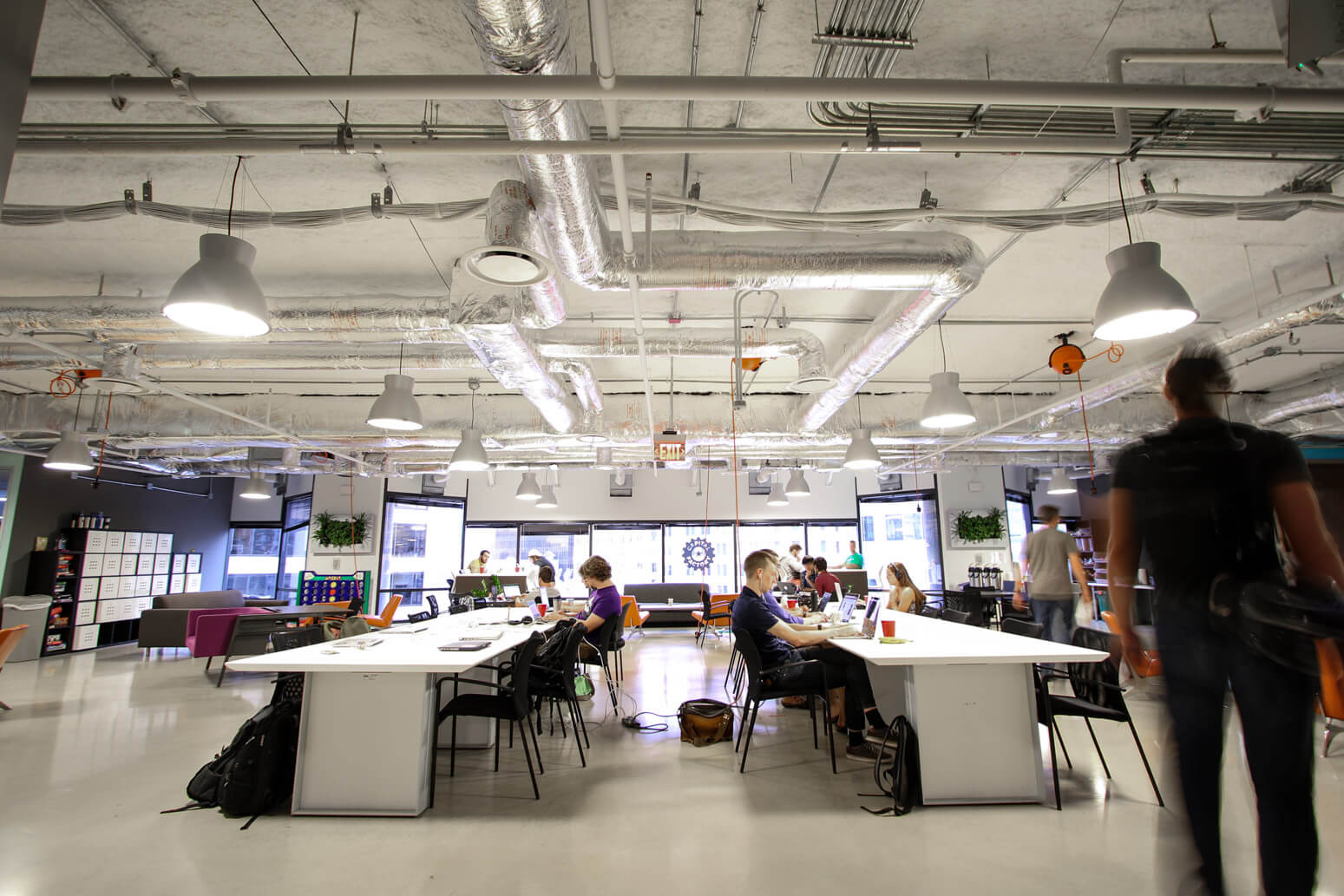 A fully equipped film studio and in-house media team aid startups with their storytelling, helping share what they’re working on with the technology community and the public. 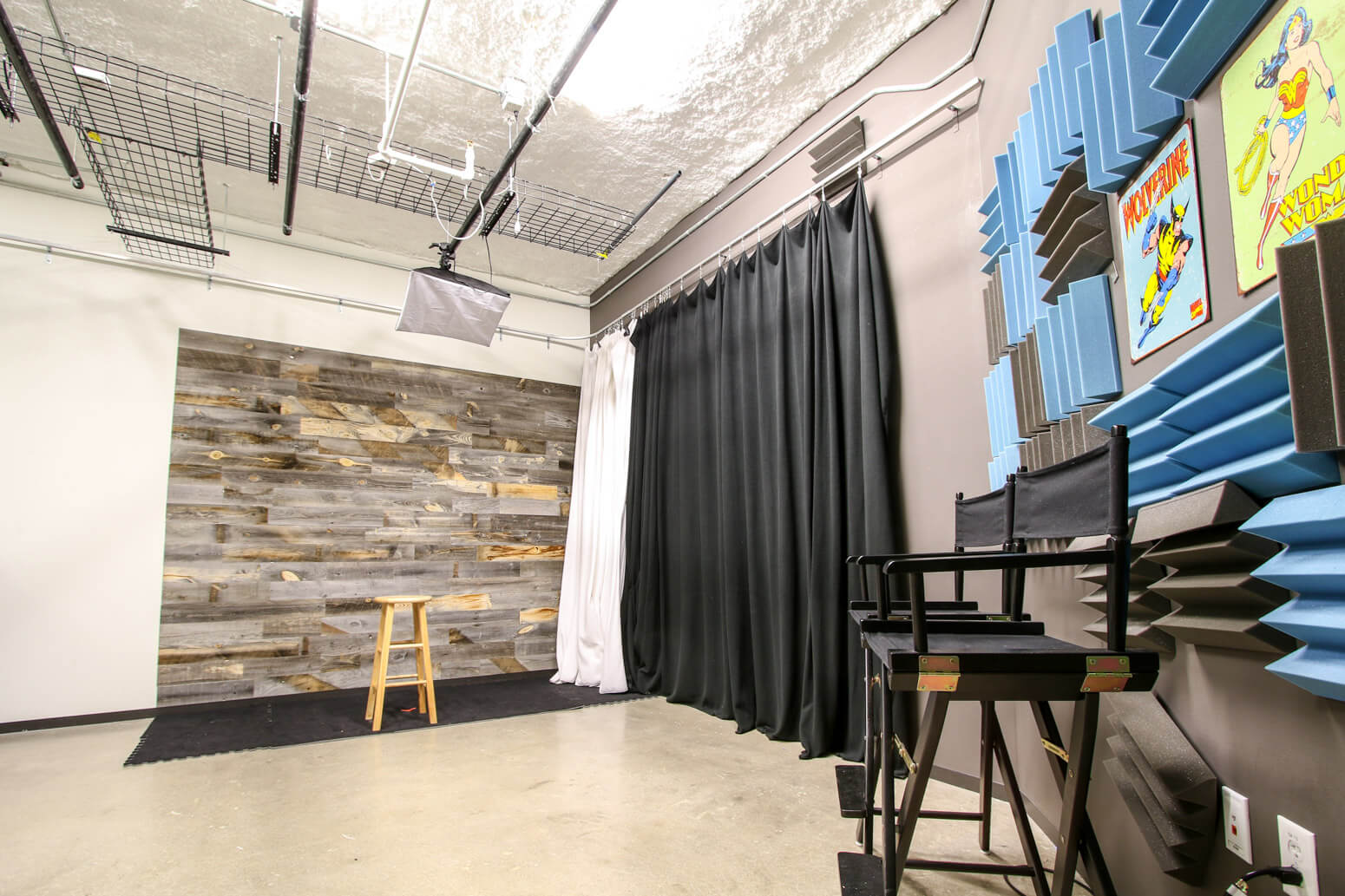 The exclusive in-house accelerator program accepts up to 150 applications each month, from which a select few are chosen. The six-month program helps startups raise capital and grow their customers while benefiting from the connections provided by the ecosystem.

Successful applicants have access to expert advice from Texas’s top CEOs and the potential to earn capital from angel investors in the community. If a startup can convince two partners to each contribute $25,000, the Capital Factory will match that amount resulting in $100,000 in seed cash. 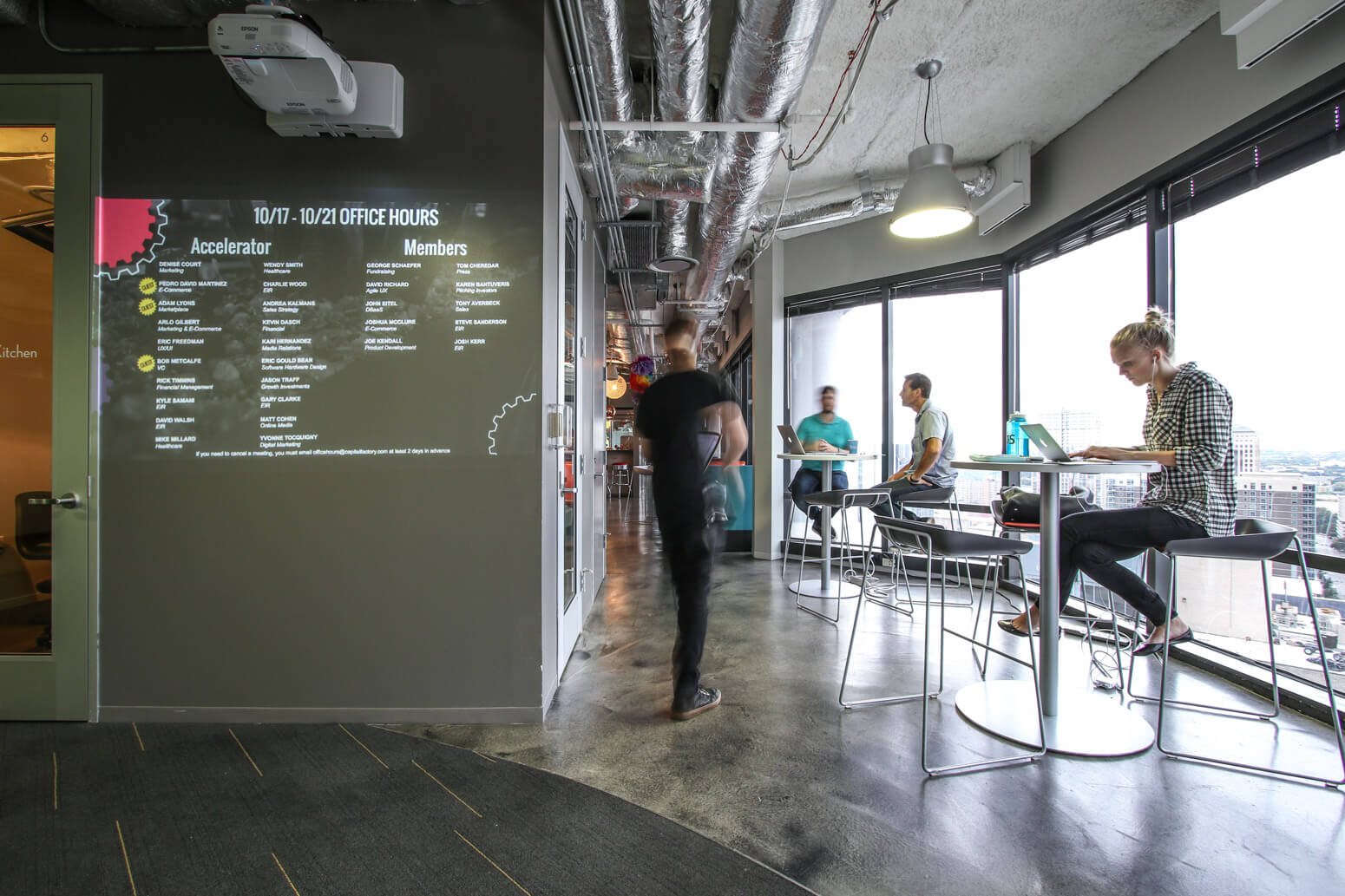 Capital Factory doubles as an event space, hosting roughly a thousand (yes, 1,000) tech-focused events a year from smaller meetups to multi-day hackathons to special guest visits like then-President Barack Obama in 2013 and Apple CEO Tim Cook in 2017. Last year, these events welcomed more than 50,000 people through the factory’s doors.

One of the largest events organized by Capital Factory is the ATX Startup Crawl which sees thousands of people touring the cities tech company office fuelled by table stakes pizza and local brews. 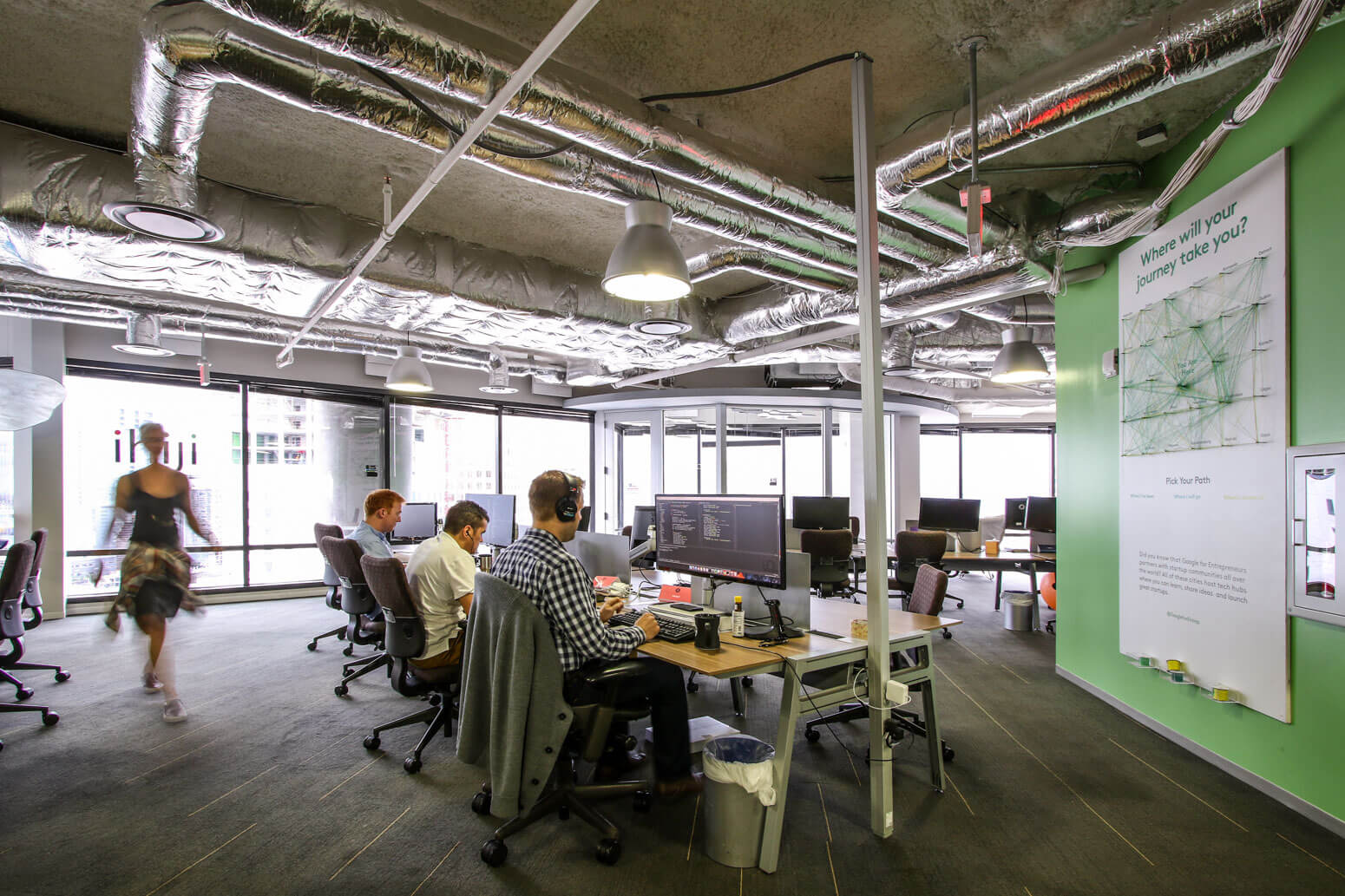 The decor of the space firmly embraces the nerdy stereotypes of its occupants. Whether those tropes are true or not, the decor reflects more than a passive interest in the fictional world, including Star Wars, comic books, Pokemon and more. Even the signature Capital Factory t-shirt is adorned with the slogan: “May the funding be with you.”

A secret meeting room is hidden behind an automatic camouflaged book-shelf door for the most top-secret meetings (and satisfying the desire for hero-worthy secret-lair).

Capital Factory is also home to two coding schools: Hack Reactor and the Austin Coding Academy. Each run three-month programs with as many as 70 students. As these junior coders hone their programming skills, it’s not uncommon for graduates to get picked up by startups working out of the space. 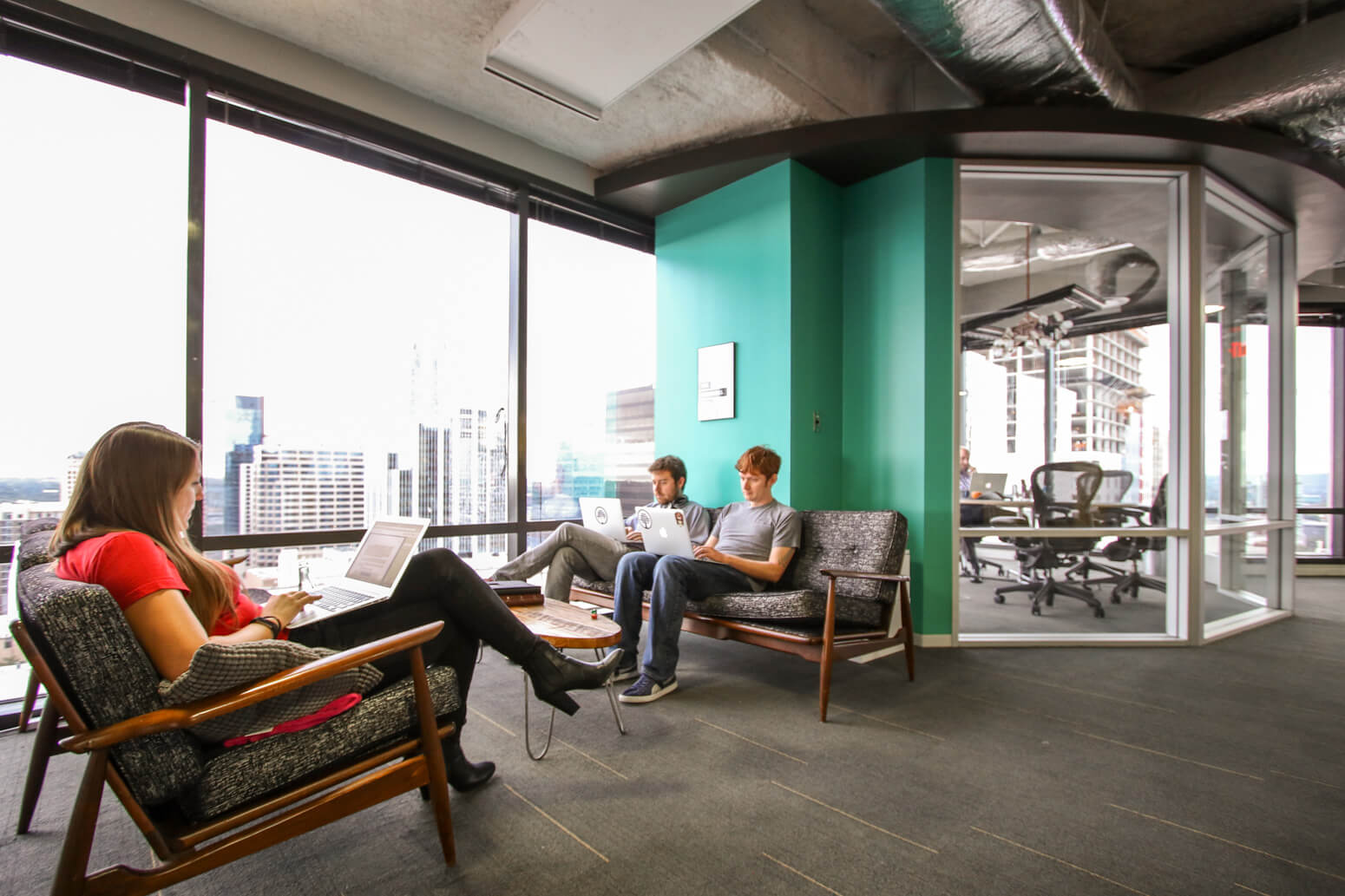 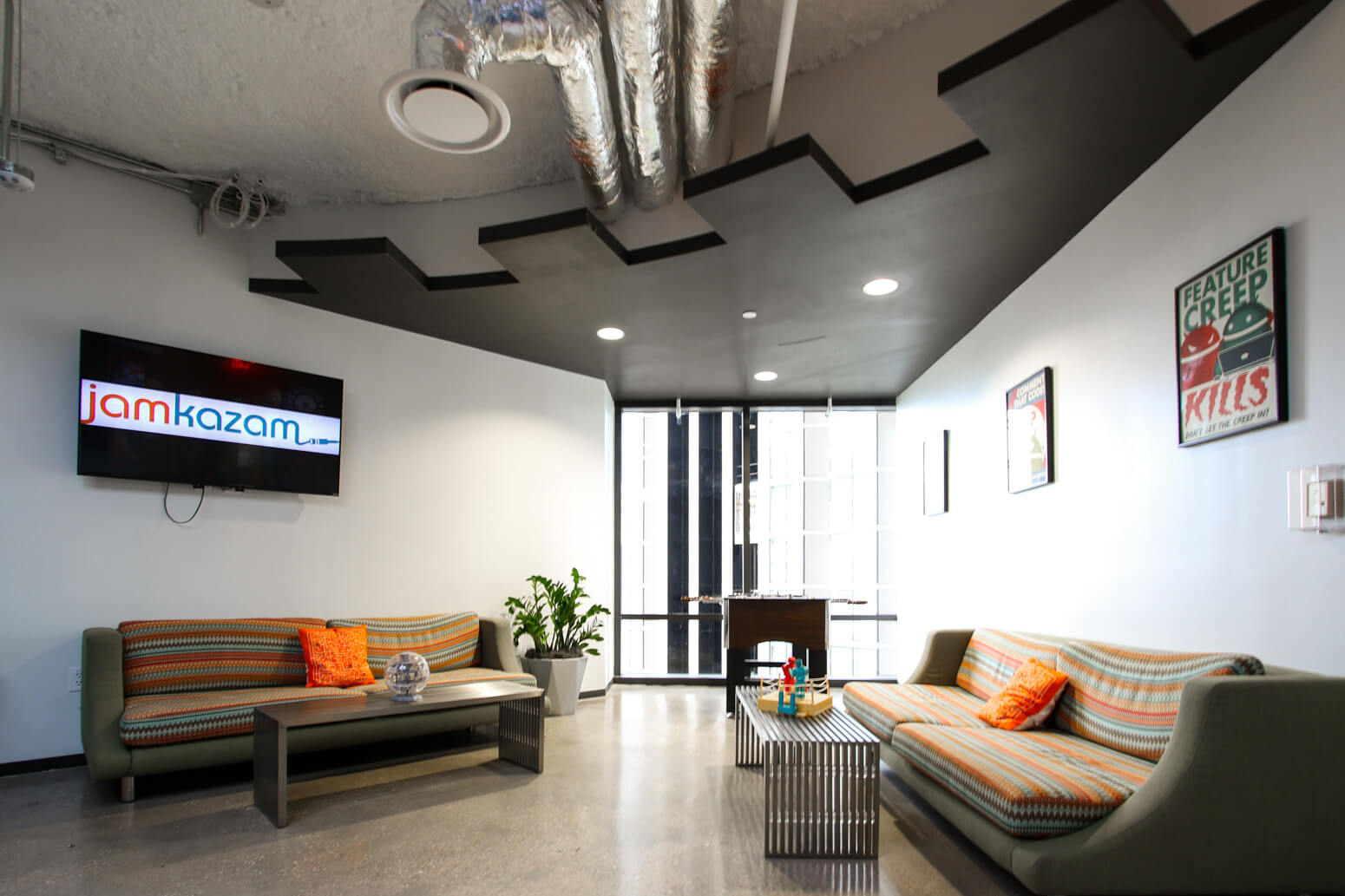 The working space and incubator hybrid hosts happy hours a couple times a week, encouraging members to break away from their desk to socialize. With two kegs on tap, Capital Factory always has a cold beer ready to pour, or just local cold brew coffee on hand.

The kitchen is fully stocked, with drinks and snacks included with their membership. 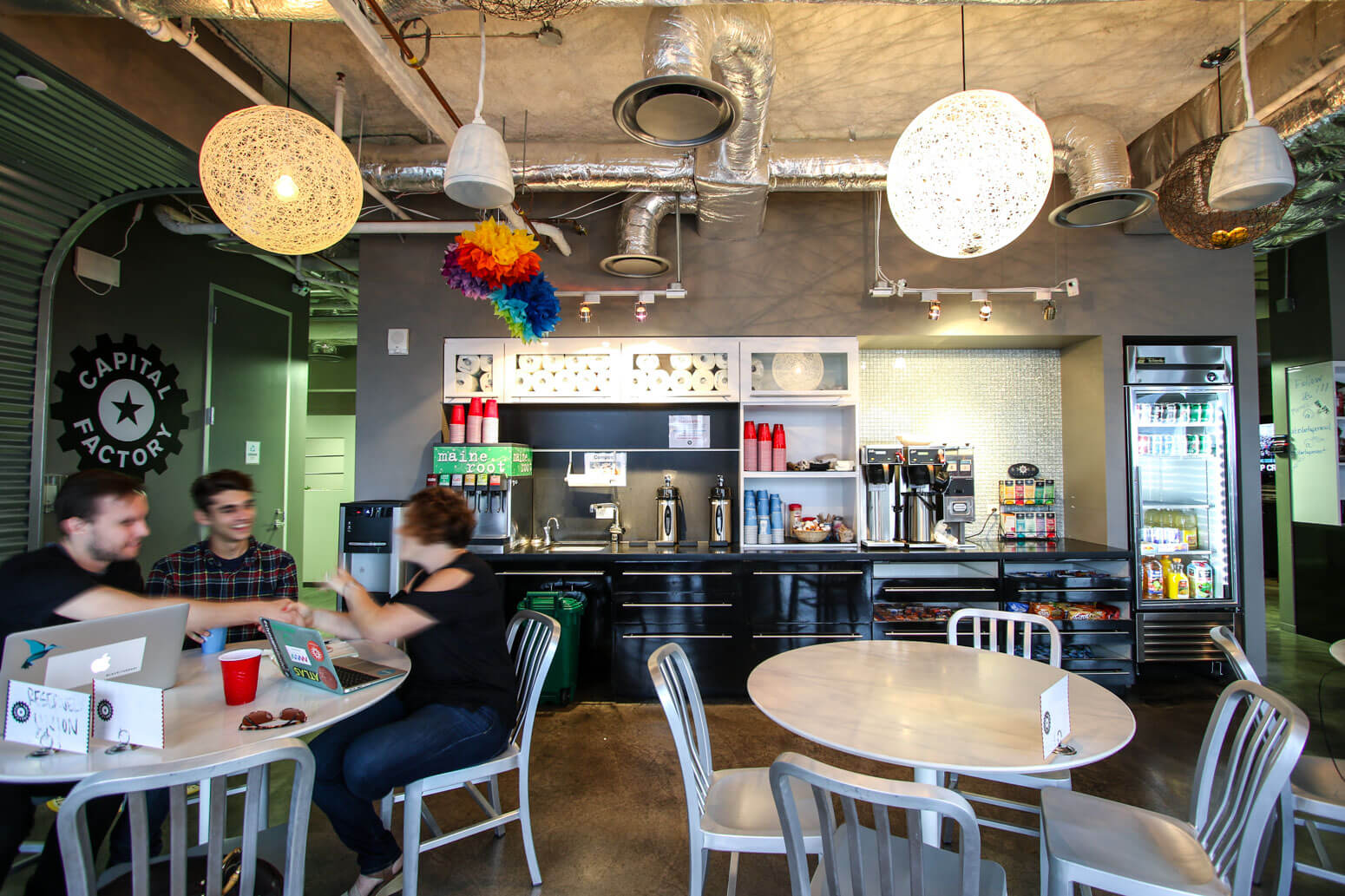 Each quarter, members are taken out for social events from a booze cruise to a movie premiere. Ping pong tournaments are more common, with teams congregating at the table and waging paddle warfare anytime during the day. 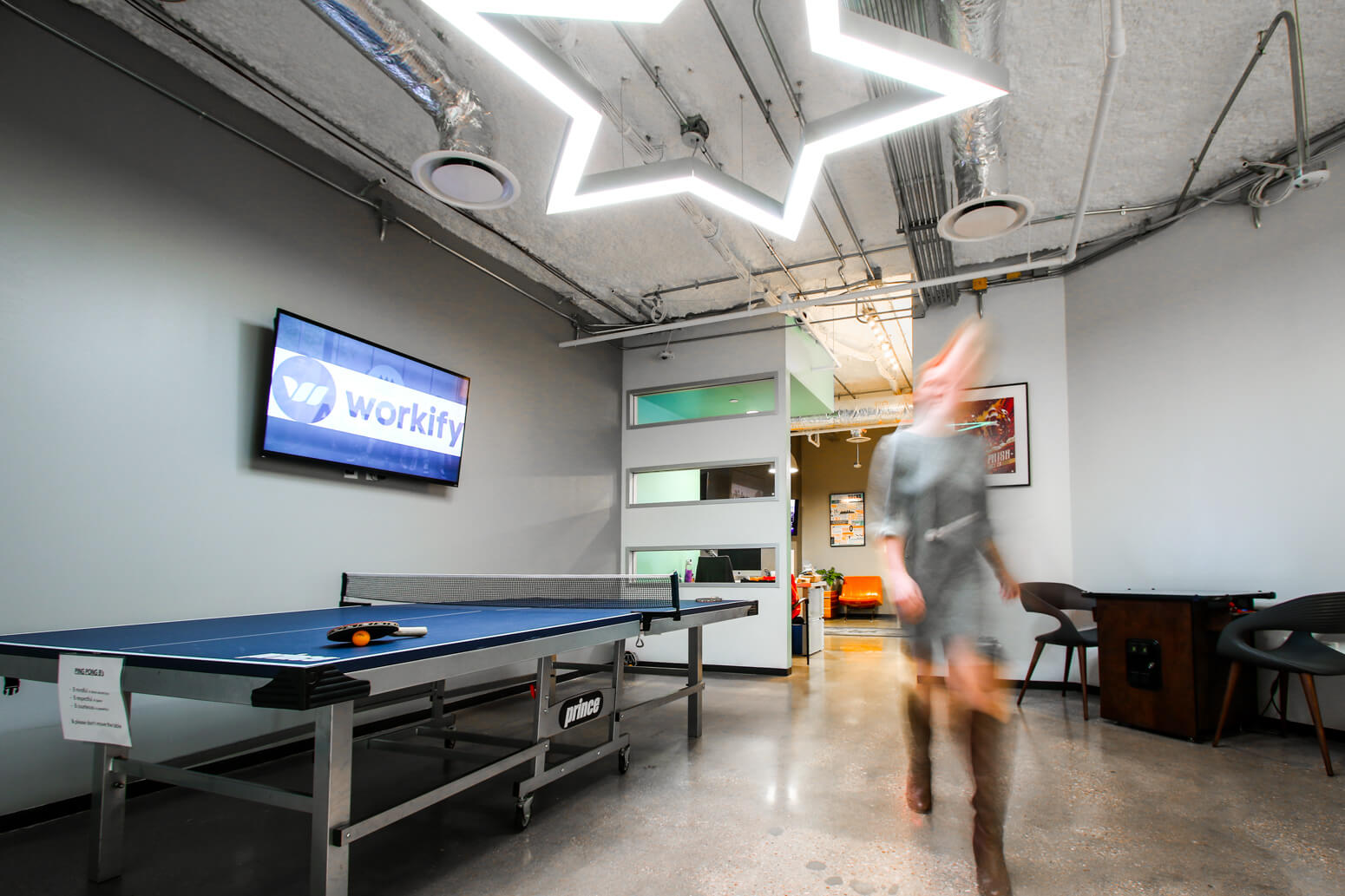 Whether it’s practicing a dive or a synchronized swimming routine, Capital Factory members can plunge into the building’s rooftop pool to break the Texas heat. Members enjoy access to both the pool and gym through a convenient agreement with the hotel in the same building. 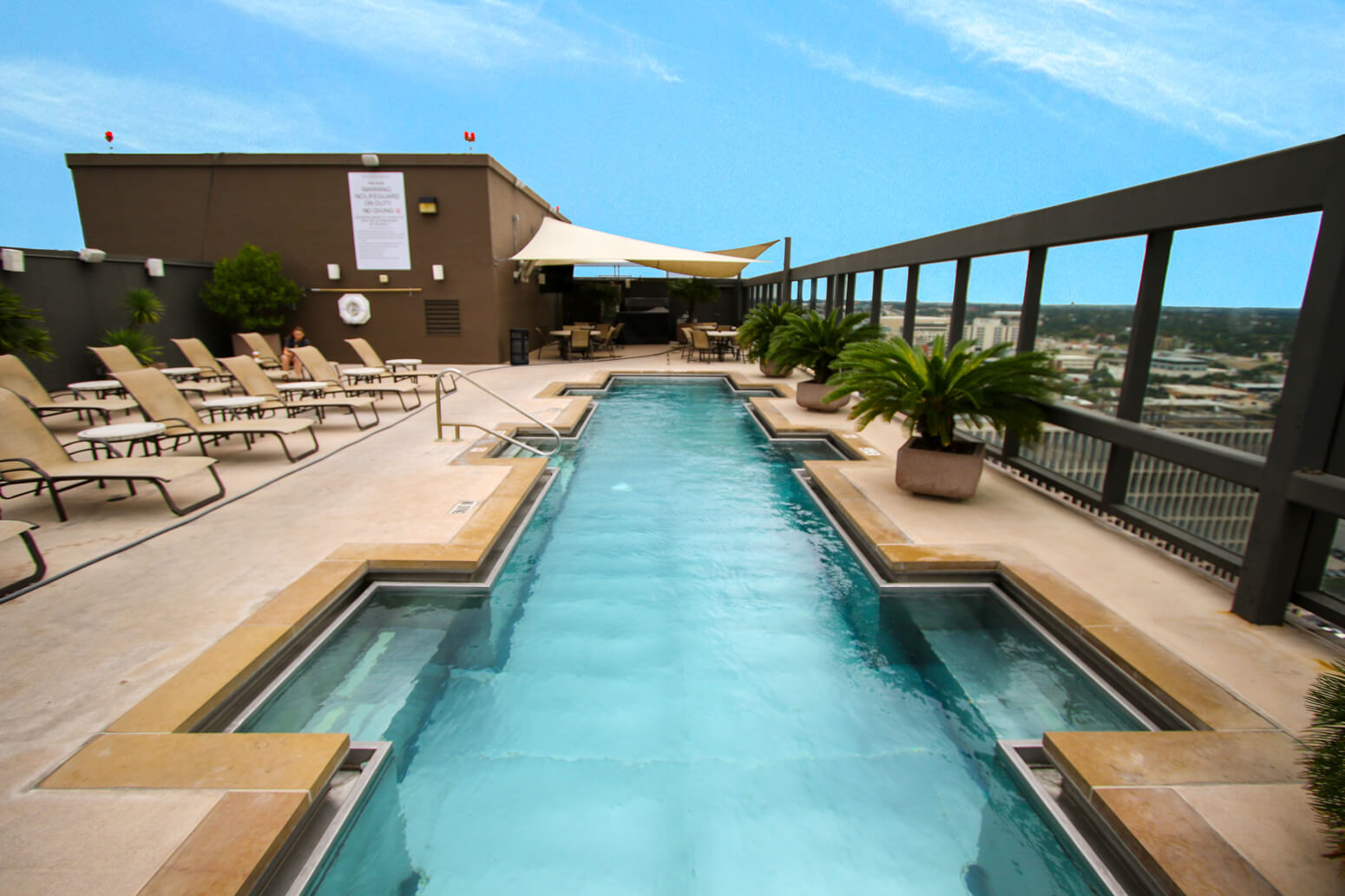 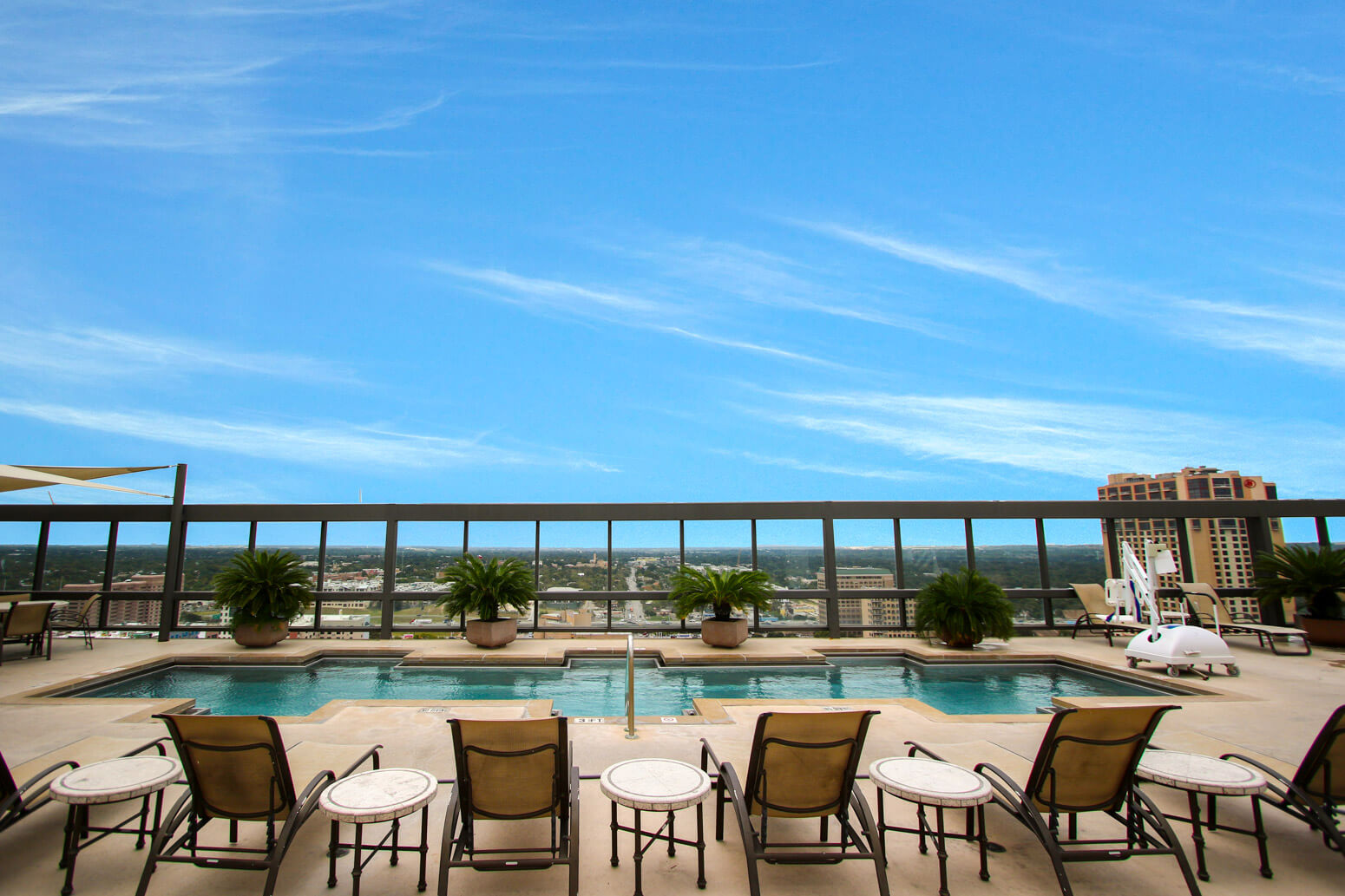