When 16-year-old Moe Omer realized he didn’t have a thousand dollars to pony up for a new phone, he was inspired to create something he and his friends could afford that still did all the awesome stuff they had come to expect from a mobile device. So, they got Frank.

An Indiegogo campaign launched today is now accepting pre-orders for the brand new Frank. phone, a device that forgoes the fanciest of mobile features in lieu of an incredibly cheap price point, coming in at only $180 USD. The phone is made by the Ottawa-based tech startup Frank Technologies, a company that specializes in making sure the average person has access to good quality consumer gadgets at honest and fair prices. 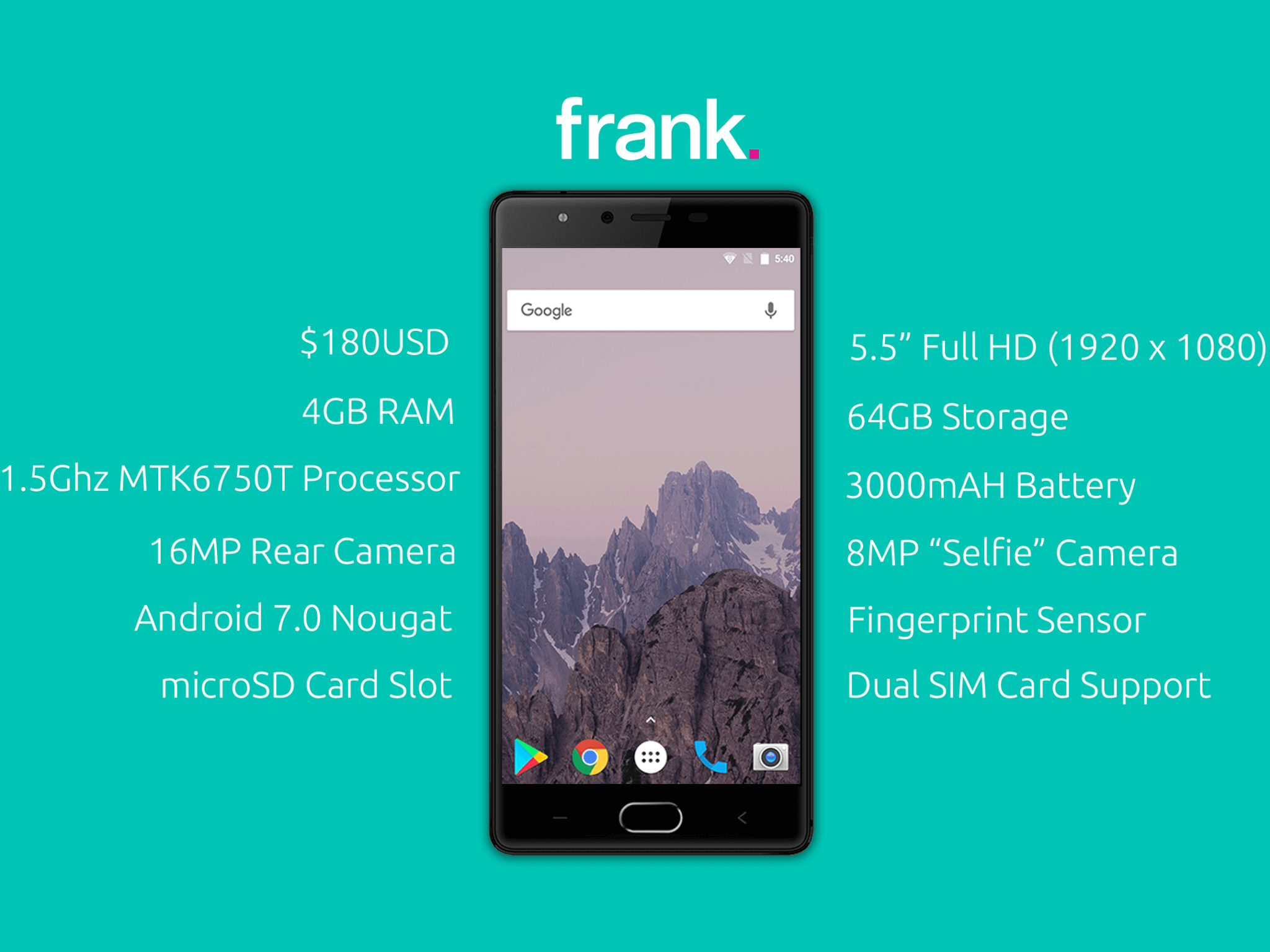 “Cheap phones are getting good, good phones are getting cheap. We want to push this even further, especially in North America where a few big brands dominate the smartphone space,” says the now 17-year-old Omer, Frank Technologies self-proclaimed genius boy wonder. “A smartphone is a powerful tool and not being able to afford one can be extremely restrictive. We’re trying to change that.”

Omer recruited Fahd Alhattab to start Frank Technologies. Alhattab is billed as the company’s chief troublemaker, so it’s clear marketing the device differently was a high priority for the two.

“The democratization of technology and access to worldwide manufacturers has really given an opportunity for the little guys to create and test prototypes and bring to market competitive consumer technology,” says Alhattab. “I’m really excited to be leading this team of talented youth in creating a frank brand that provides value-packed tech at a low cost, and we’re starting with the Frank. phone.”

Frank Technologies prides itself on cutting its profit margins so they don’t have to charge exorbitant prices. The company’s founders refuse to act like “money hungry a-holes,” (their words). The first batch of phones available through Indiegogo will help pay for the initial mass rollout of the product. There will 500 phones (offered in stages of 100) priced at the initial $180, then that price will jump to $220 when those sell out.

Some of other specs for Frank. include a 5.5” full HD screen, a 3000mAH battery, a 16MP rear camera and an 8MP selfie cam. There is also a fingerprint sensor, but definitely not a face scanner, which is a piece of pricey extraneous tech the company holds in fairly high contempt.

Frank. could appeal to all kinds of users, from children to non-tech enthusiasts to those who break or lose their devices often. The phone can handle everything a typical user needs, from scrolling through social media to answering emails and surfing sites. Frank. joins Essential as the latest phone that is coming out to try and disrupt Apple and Samsung, the two major players in the game of mobile devices.