Sometimes you need to be closer to the action.

Mastercard, as many other multinational financial institutions came to realize, needed to attract top-tier talent and improve their track record as a global payment innovator. The company, aptly headquartered from the New York State hamlet of Purchase, felt the need to create a new space and in 2014 opened a new technology hub in Silicon Alley, which can be found in the heart of Manhattan’s Flatiron district.

With a little over 200 employees, Mastercard decided to take over four floors of a 19-storey building, totalling approximately 80,000 square feet of combined office space.

Designed by renowned firm Gensler, the open concept space naturally fosters teamwork, a mentality Mastercard prides itself on. They want to avoid a siloed environment; you can easily chat with any person on your floor at any time.

Meeting rooms are typically at the center of each floor, named after famous scientists, from Marie Curie to Masayoshi Yamaguchi. Quotes from Carl Sagan, Albert Einstein and more adorn the walls, urging employees to always consider the future. One larger boardroom is labelled “The Forum,” a clear nod to the old Roman city center, an area where important decisions were announced and celebrated. 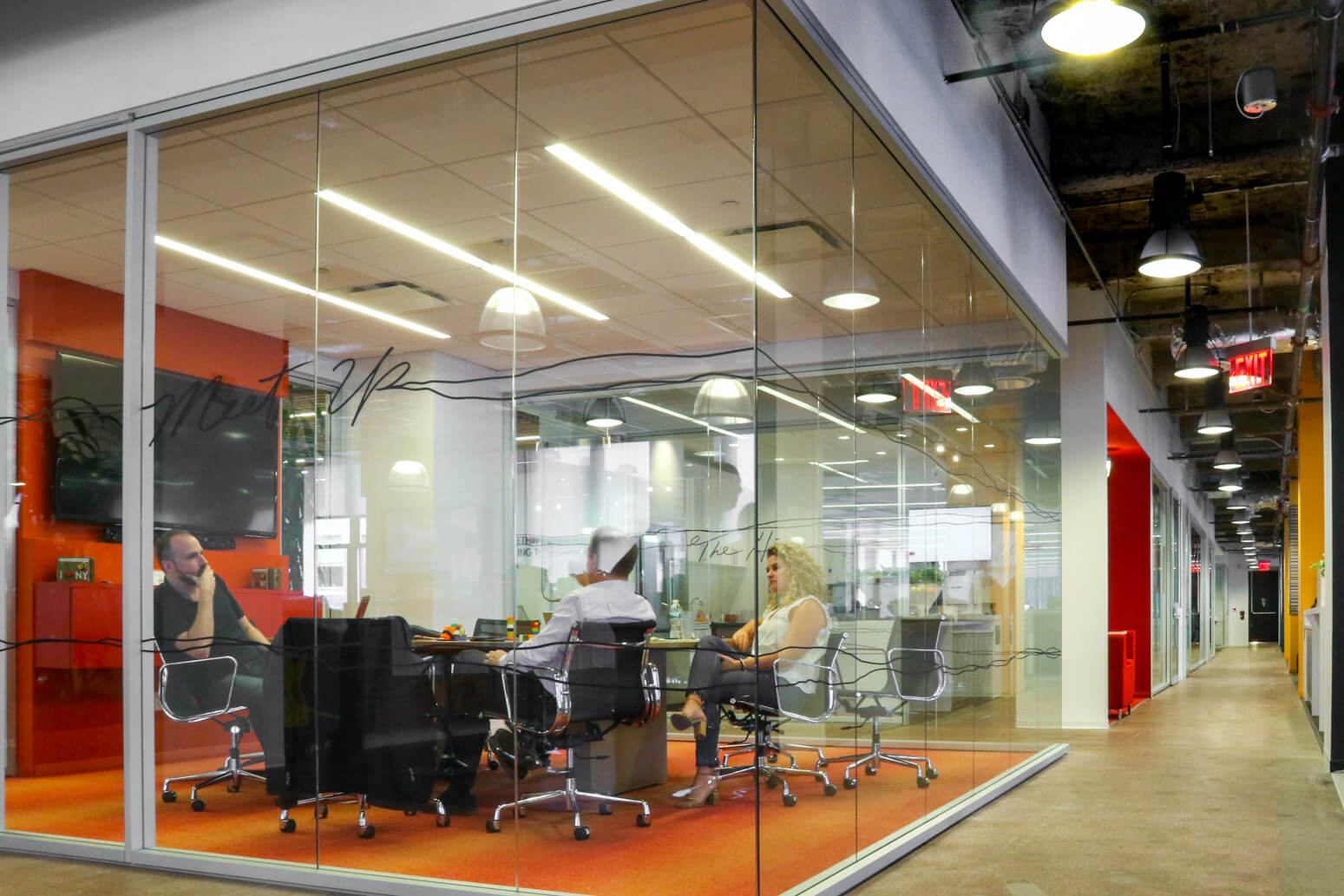 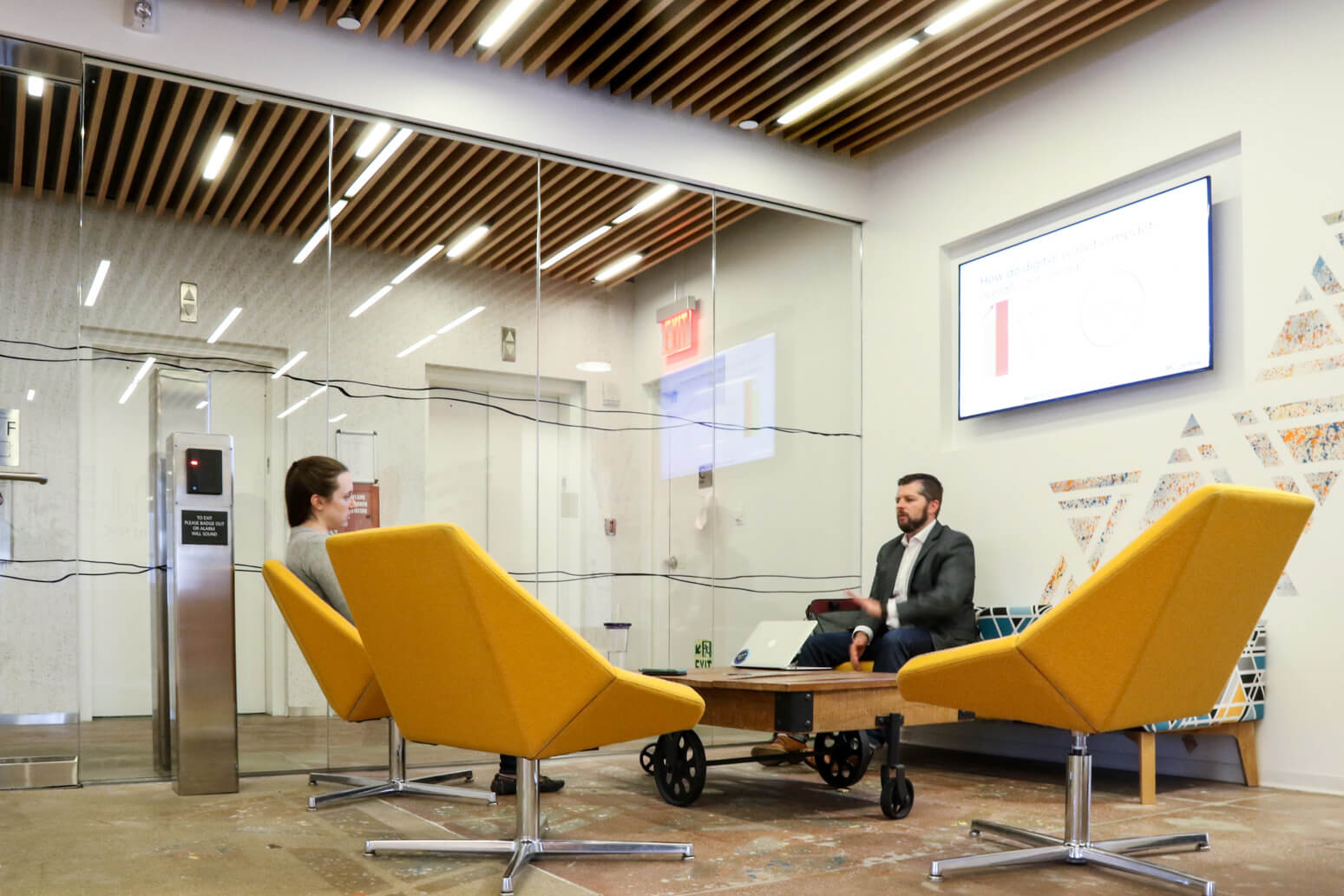 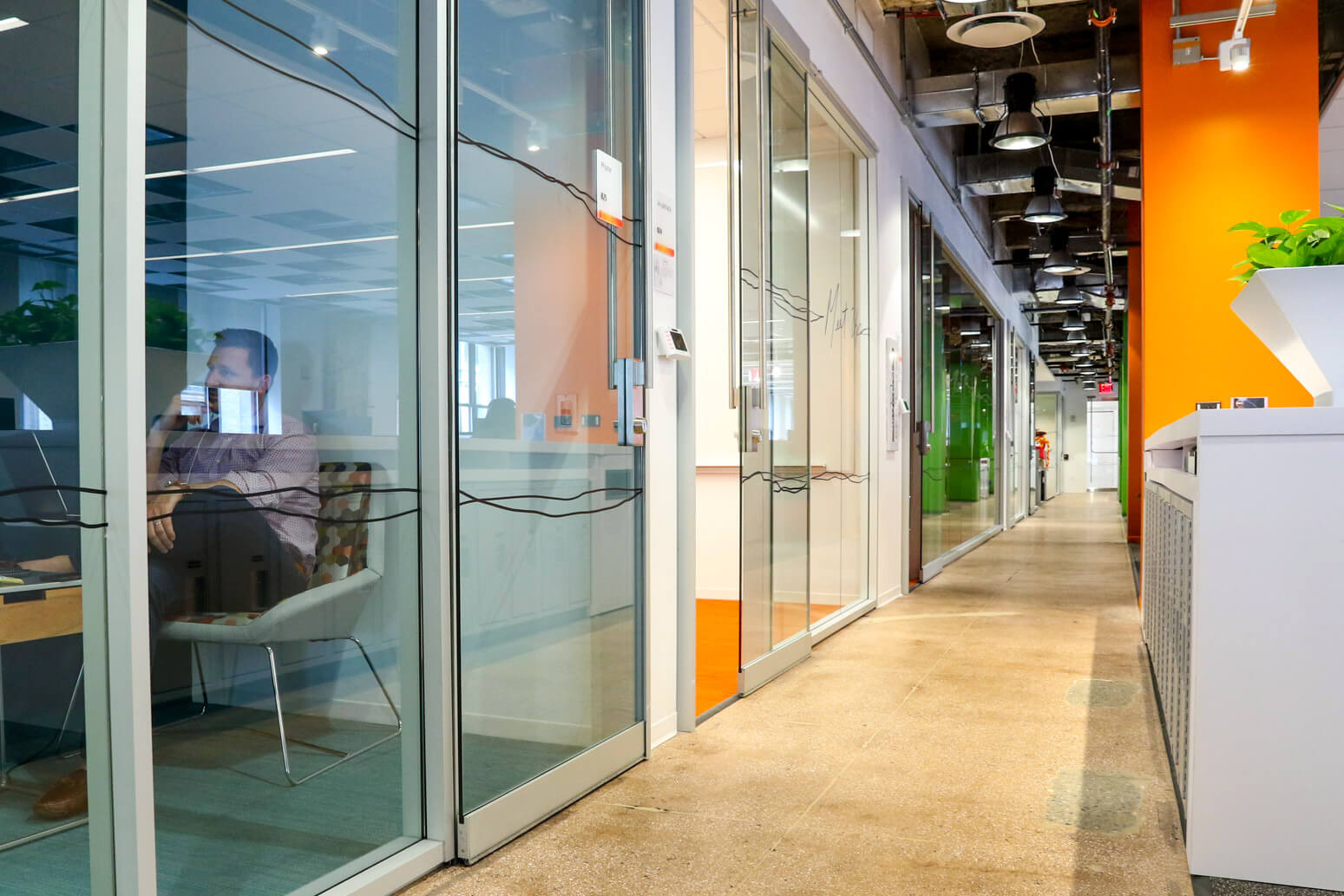 Mastercard also tries to mimic what a normal consumer feels like when they test out new initiatives. UI takes place in a veritable living-room, complete with vintage-but-modern couches and decor. The only thing that is different is the dozens of phones and tablets on the wall, ready for testing.

Many smaller teams of developers, UI, UX and new commerce employees call the Hub home, all working on different APIs or new ways to improve and realize Mastercard’s vision of a cashless world. 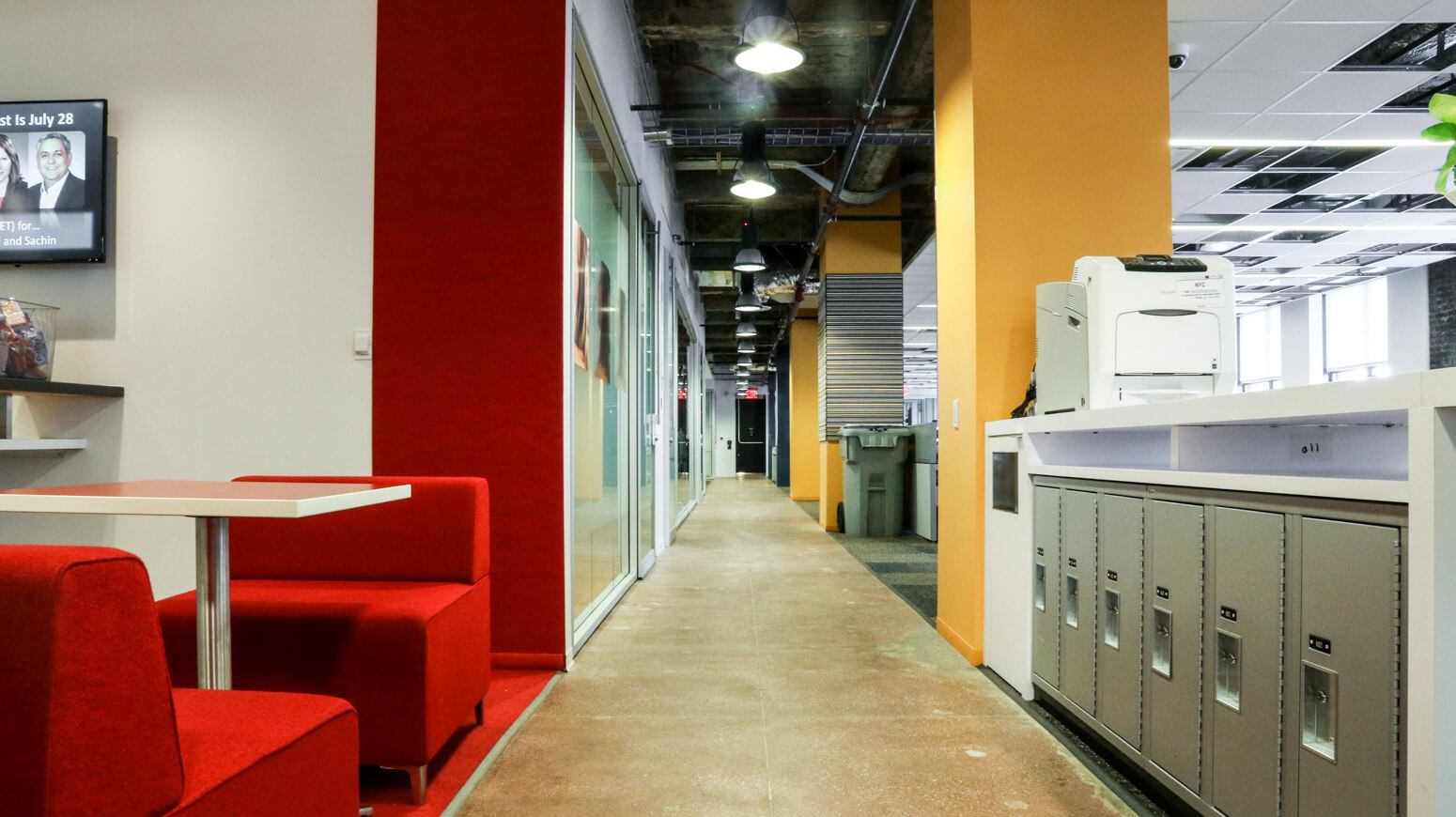 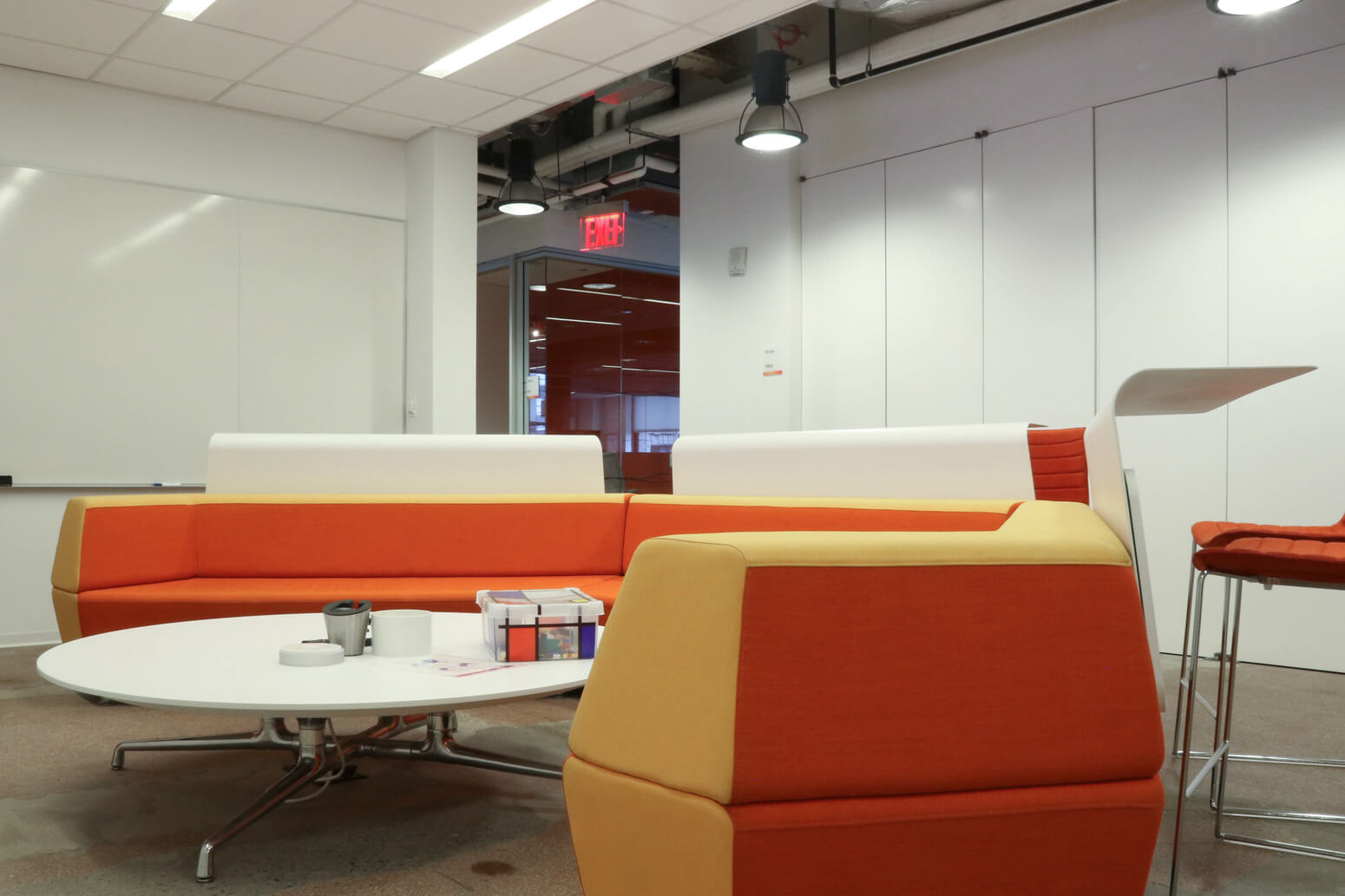 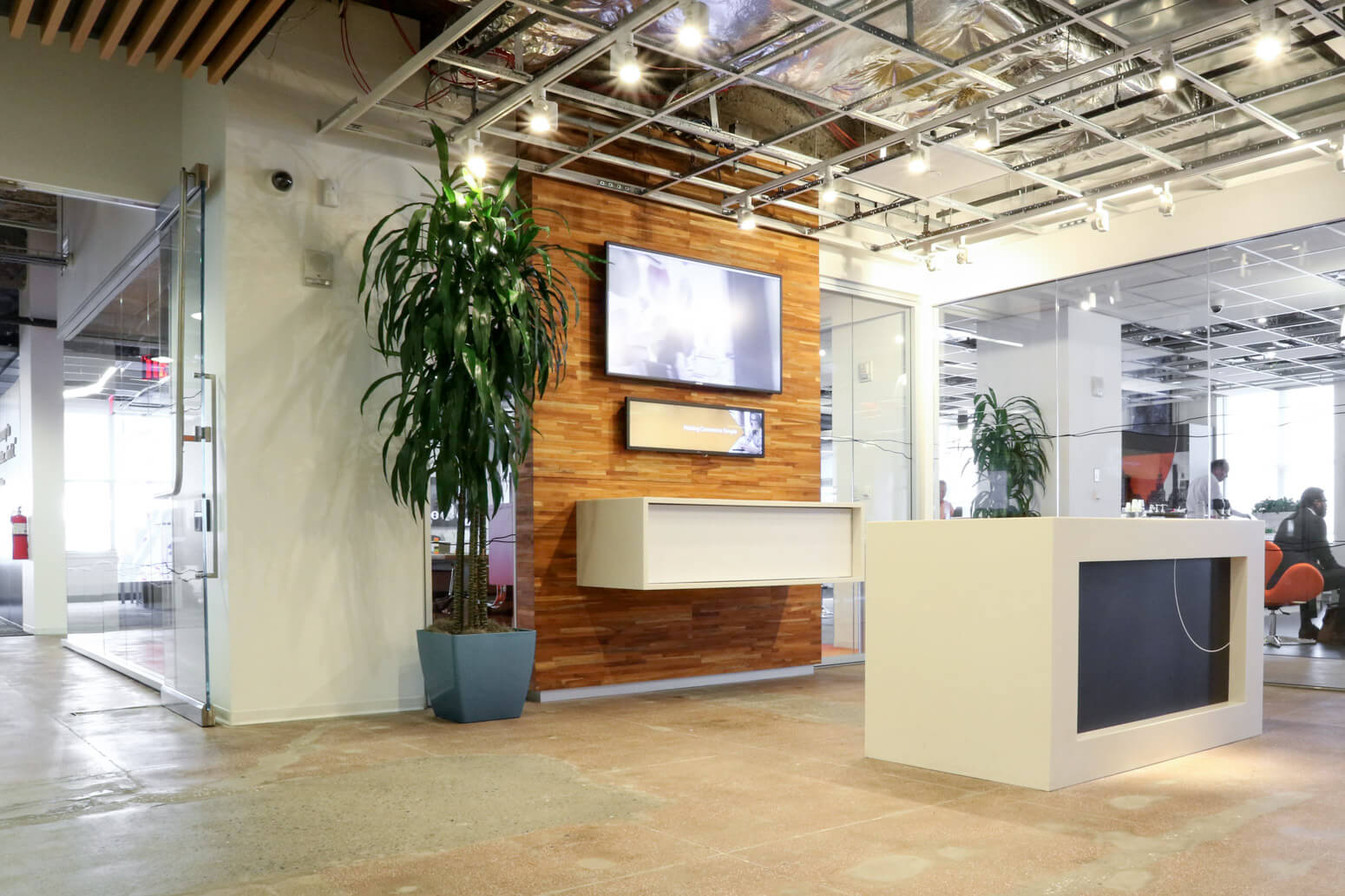 The lab is the heart of Mastercard’s R&D machine. This team works on the eighth floor, bathed in the familiar Mastercard red, orange and yellow that acts as a dominating color scheme for the entire office. 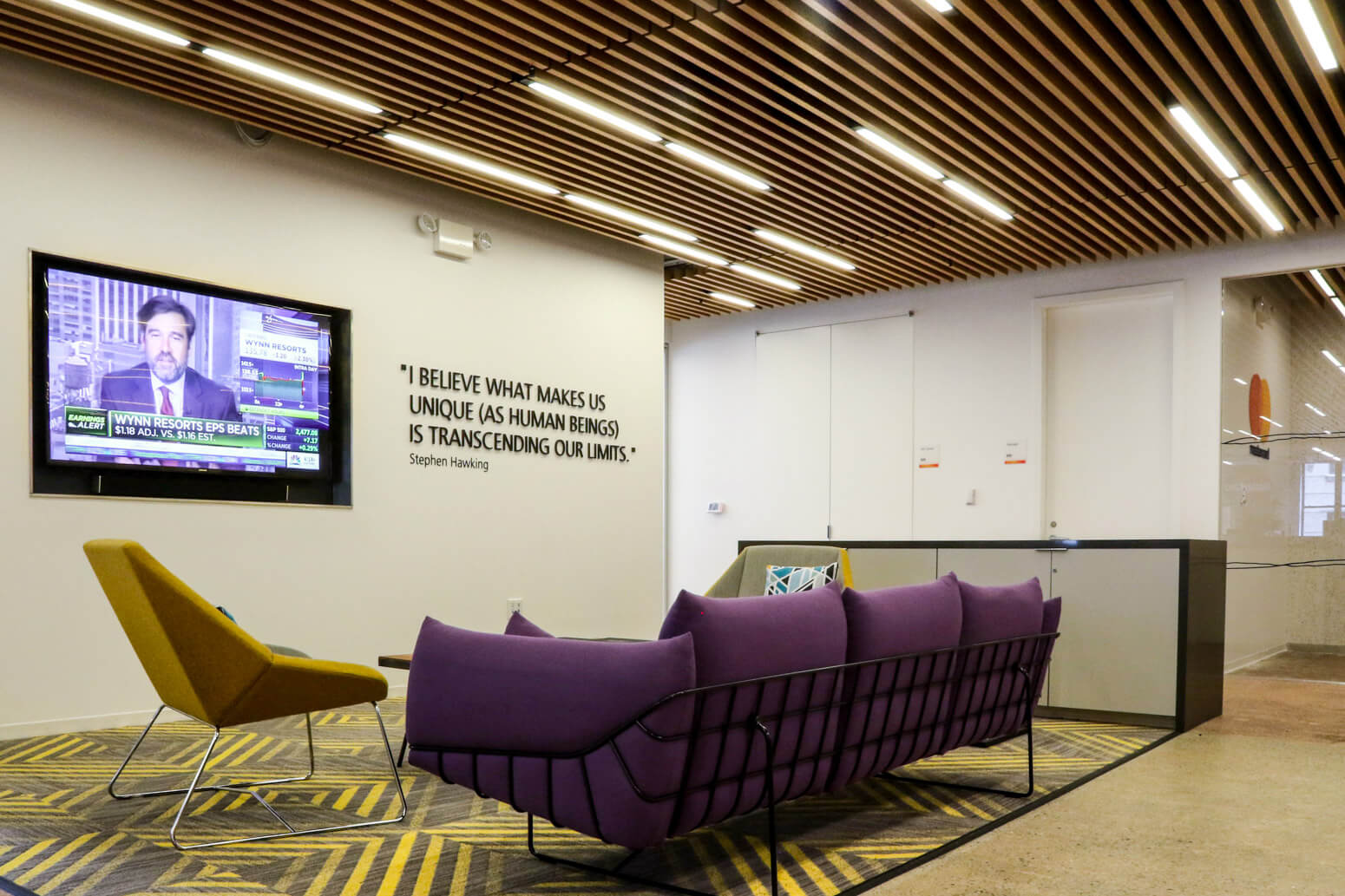 Mastercard developers sit on the 10th floor, creating and tinkering with APIs designed to make merchant’s and consumer’s financial dealings easier and more fruitful. Masterpass is on floor 12, sharing space with Paths and the Innovation Showcase. Paths partners with startups around the world for six months at a time to offer virtual engagement and help them scale. For two weeks, startups will immerse themselves in the Mastercard way of life, relocating the entire company to different hubs including the NYC location.

The Innovations Showcase has several functioning examples of ways Mastercard is instituting new cashless technology. Step a few years into Mastercard’s vision of the future to see the smart gas pump that recognizes your loyalty card (and your Mastercard) as you pull up; a fridge that saves your payment info and orders milk when you run out; and even a testy robot named Pepper designed to take your burger order, all tucked into a corner overlooking 5th Avenue. 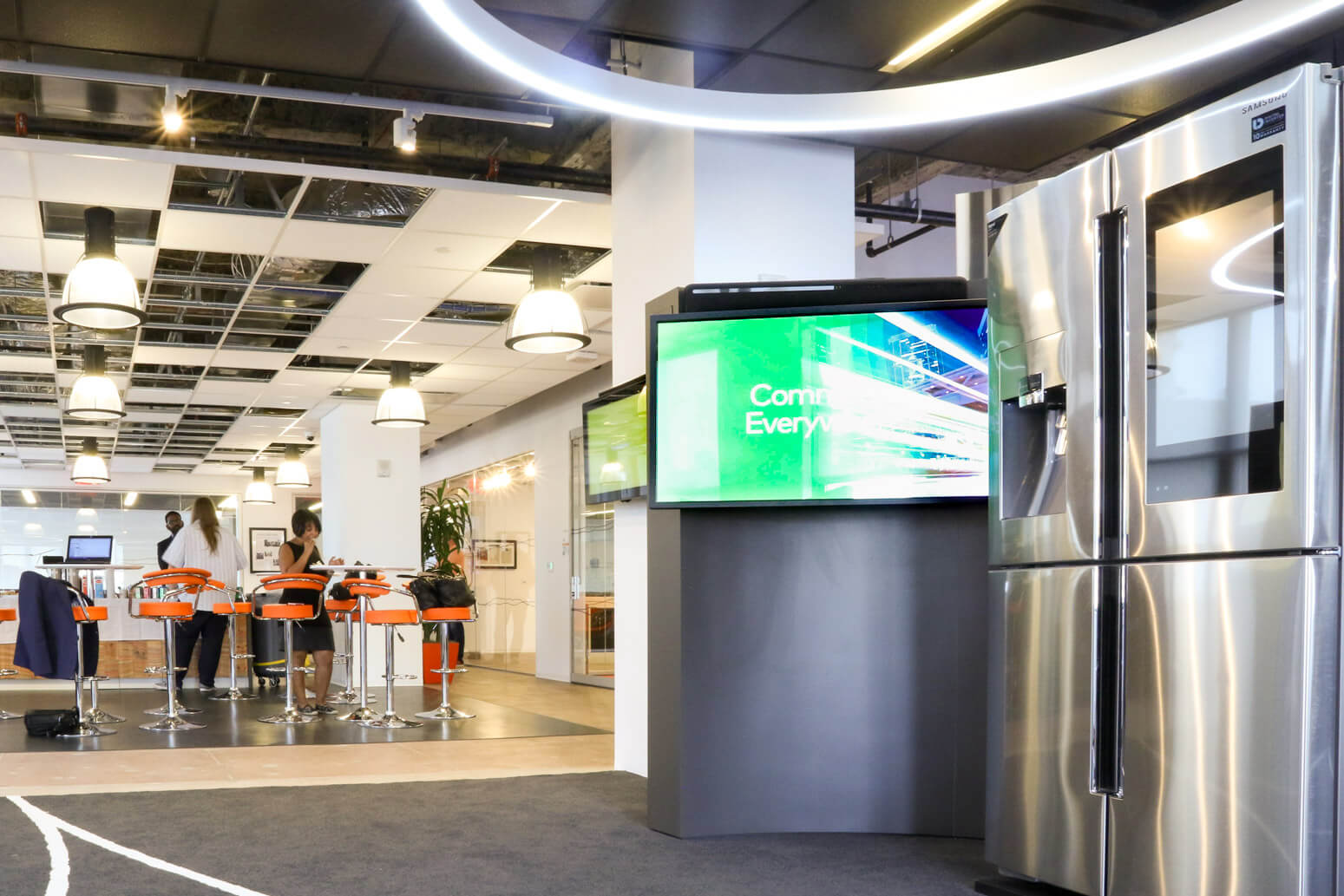 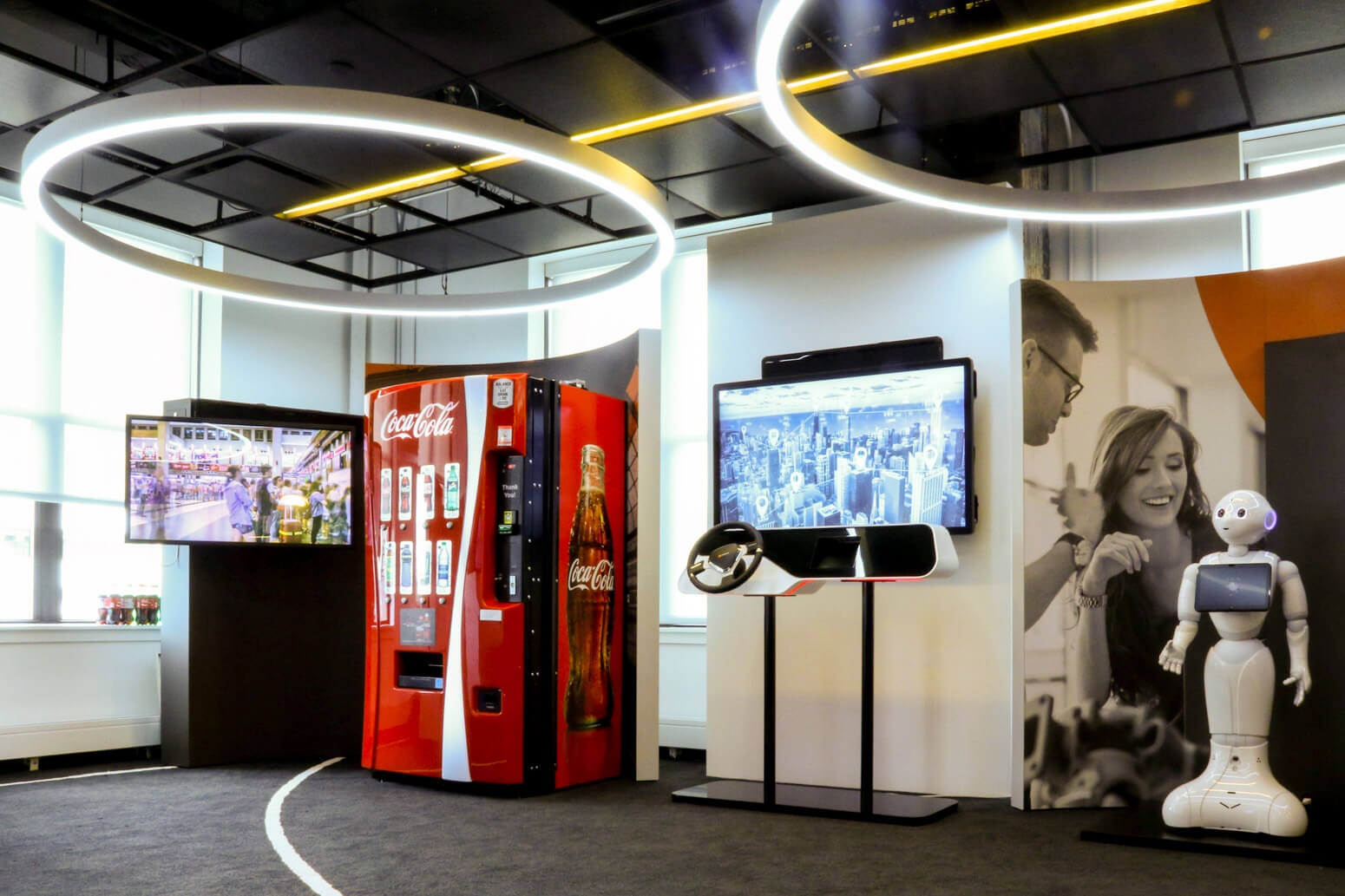 There’s a kitchen on almost every floor of the office stocked with fresh fruit, coffee and snacks. On the 11th floor, the large cafeteria is a hub within a hub, bringing everyone together for events, meals, and seminars.

Snacks and various breakfast foods are freely provided by some of Mastercard’s sponsors, while the company itself provides happy hour every third Thursday of the month. 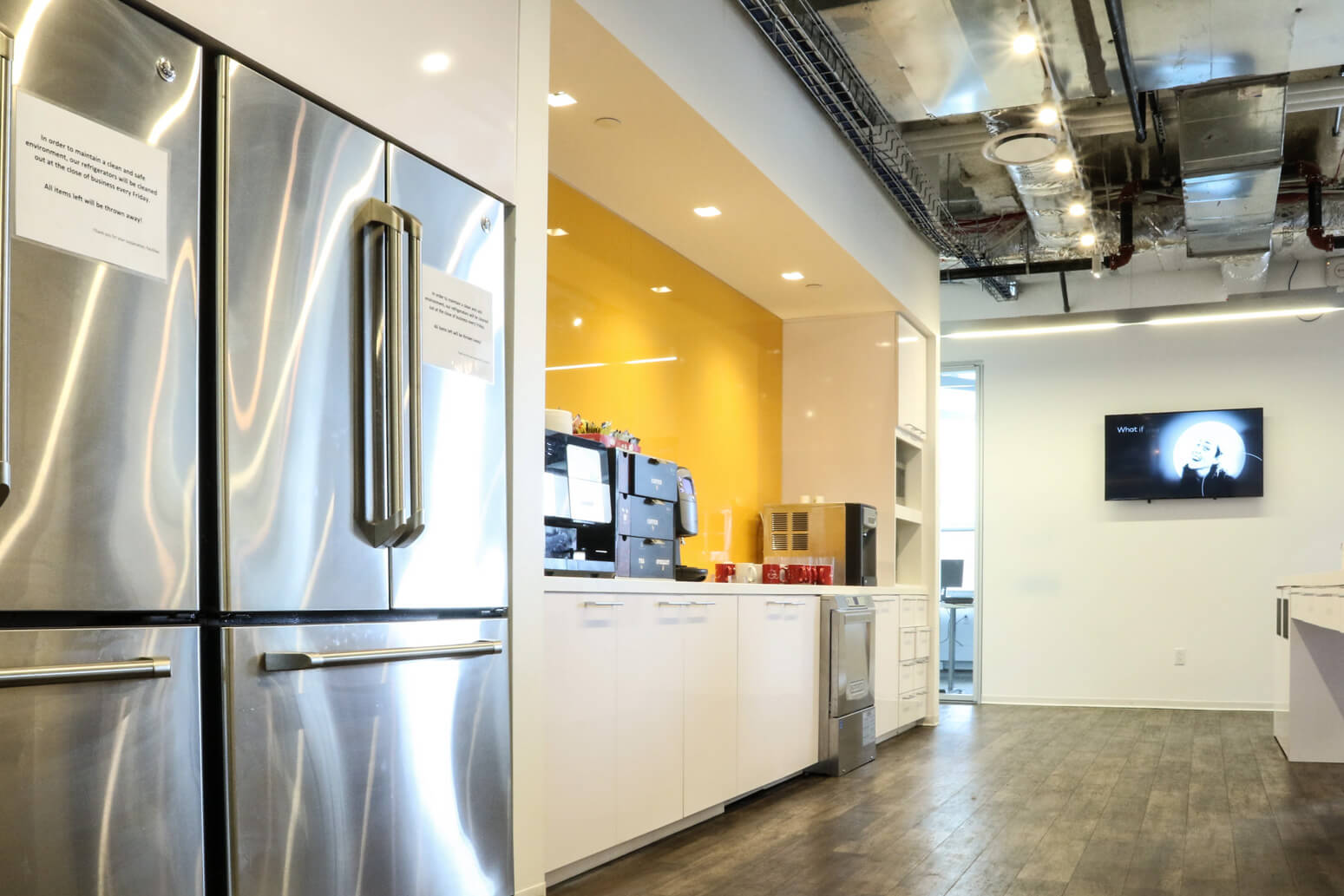 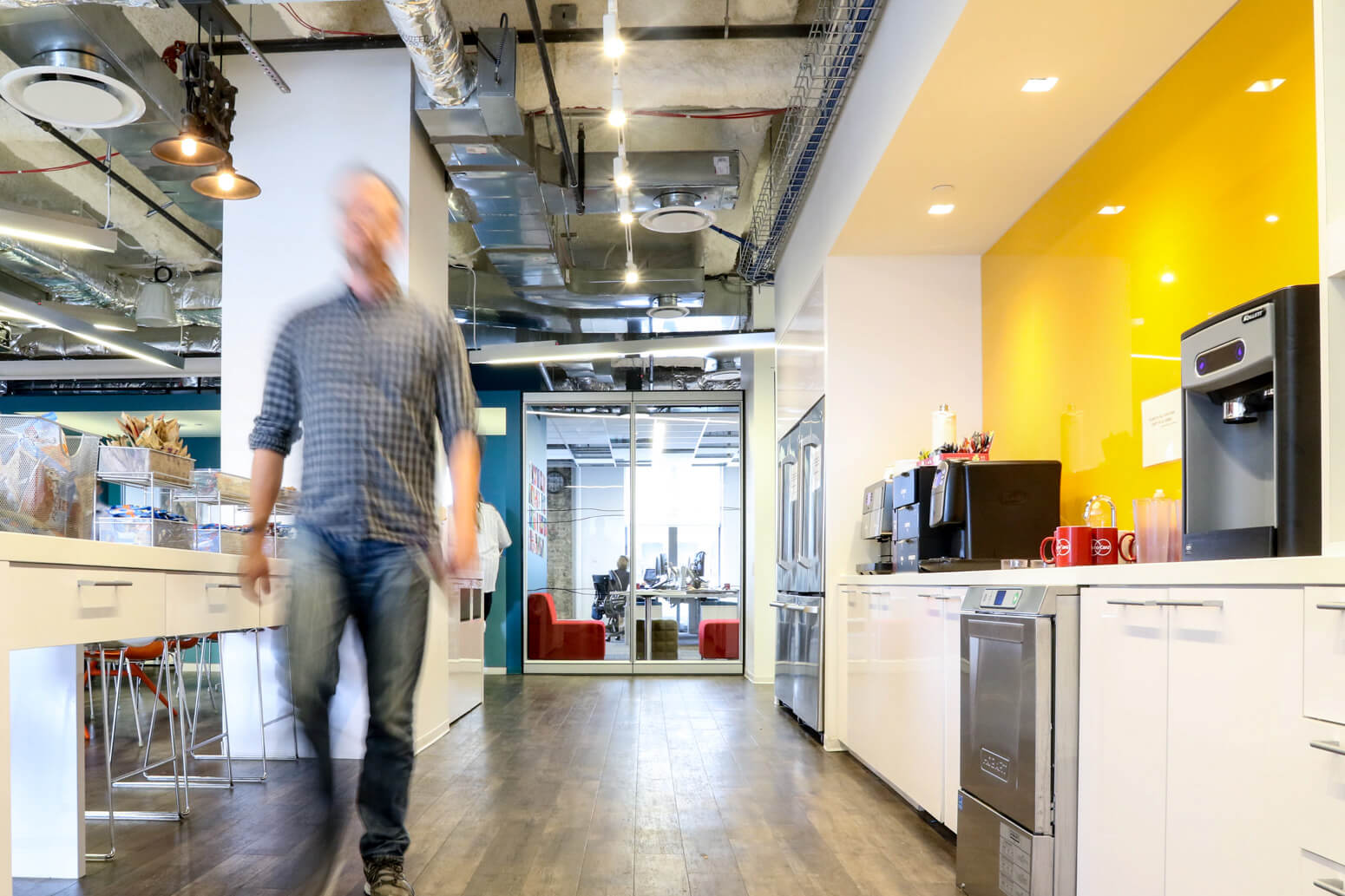 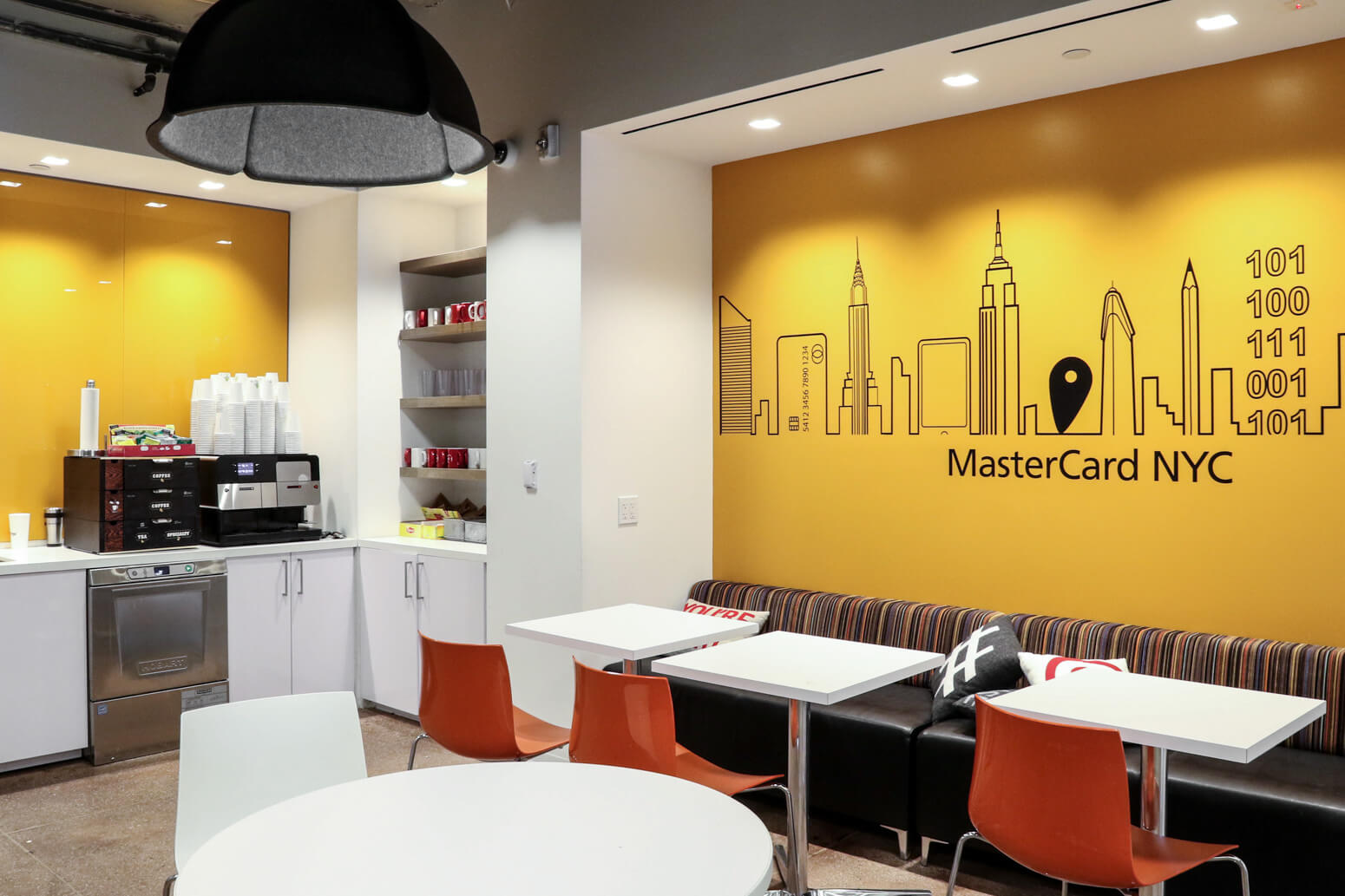 Mastercard hosts several in-house and external events designed to teach their employee base new concepts. Hub talks occur twice per month at the cafeteria when specialists describe their projects and share expertise with the in-house teams. This again creates an environment of working together—often employees will trade tips on how to improve each other’s work after a hub talk.

Take Initiative is a 48-hour hackathon during which Mastercard will hand out blankets, toothbrushes and more, encouraging teams of employees to spend two days in the office creating real scalable payment solutions. The events are half-party, half-intensive work conference. (Search #TakeMA on Twitter to see for yourself.)

IdeaBox is a system that allows Mastercard workers to become “Intrapreneurs” by creating an idea, bringing it to scale then pitching it to the CEO and CIO. If successful, the workers are plucked from their normal jobs to create an internally funded startup. Successful IdeaBox projects are wide-ranging in scope, covering everything from transaction mapping to small-scale conversational commerce AI. 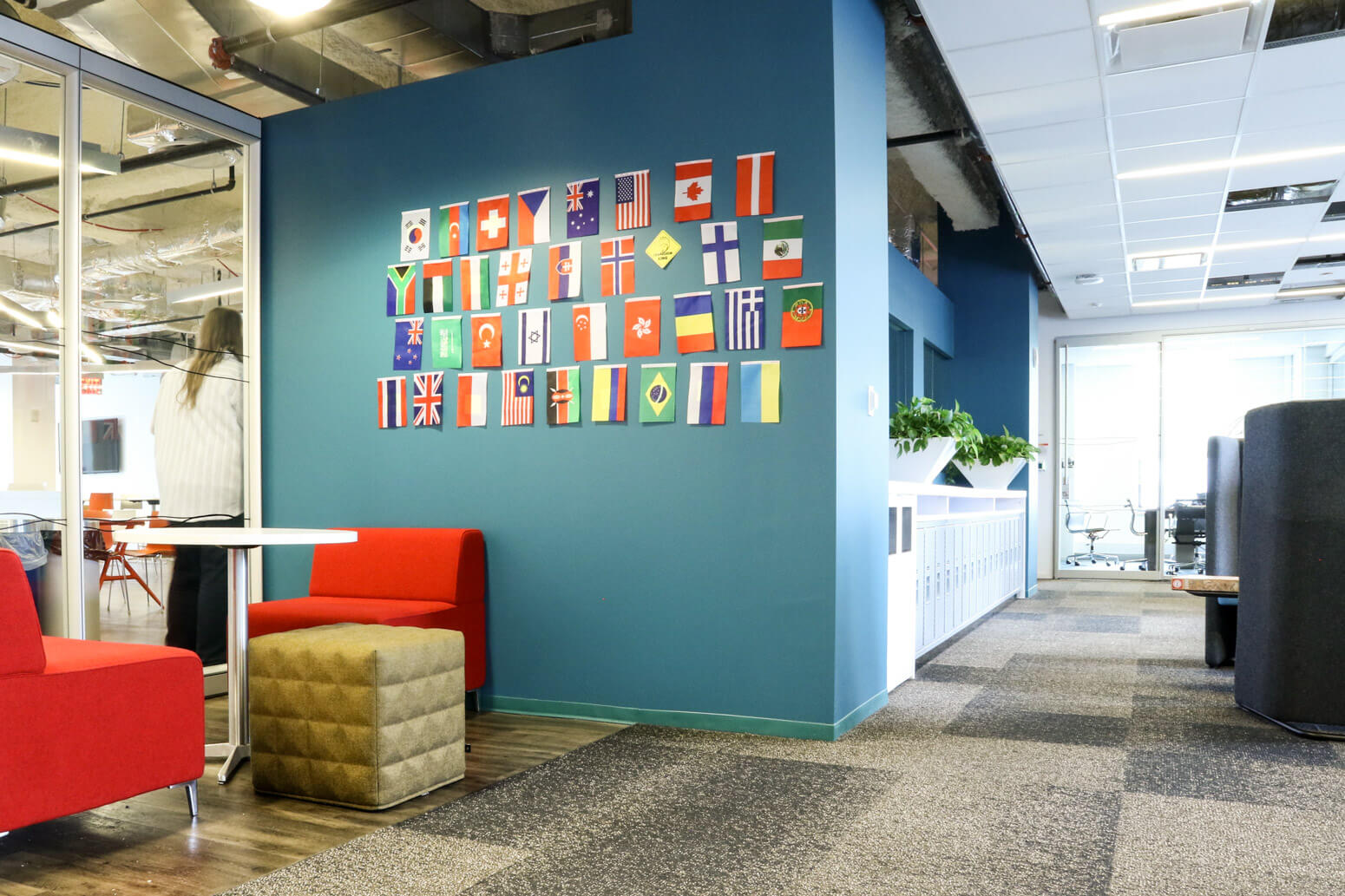 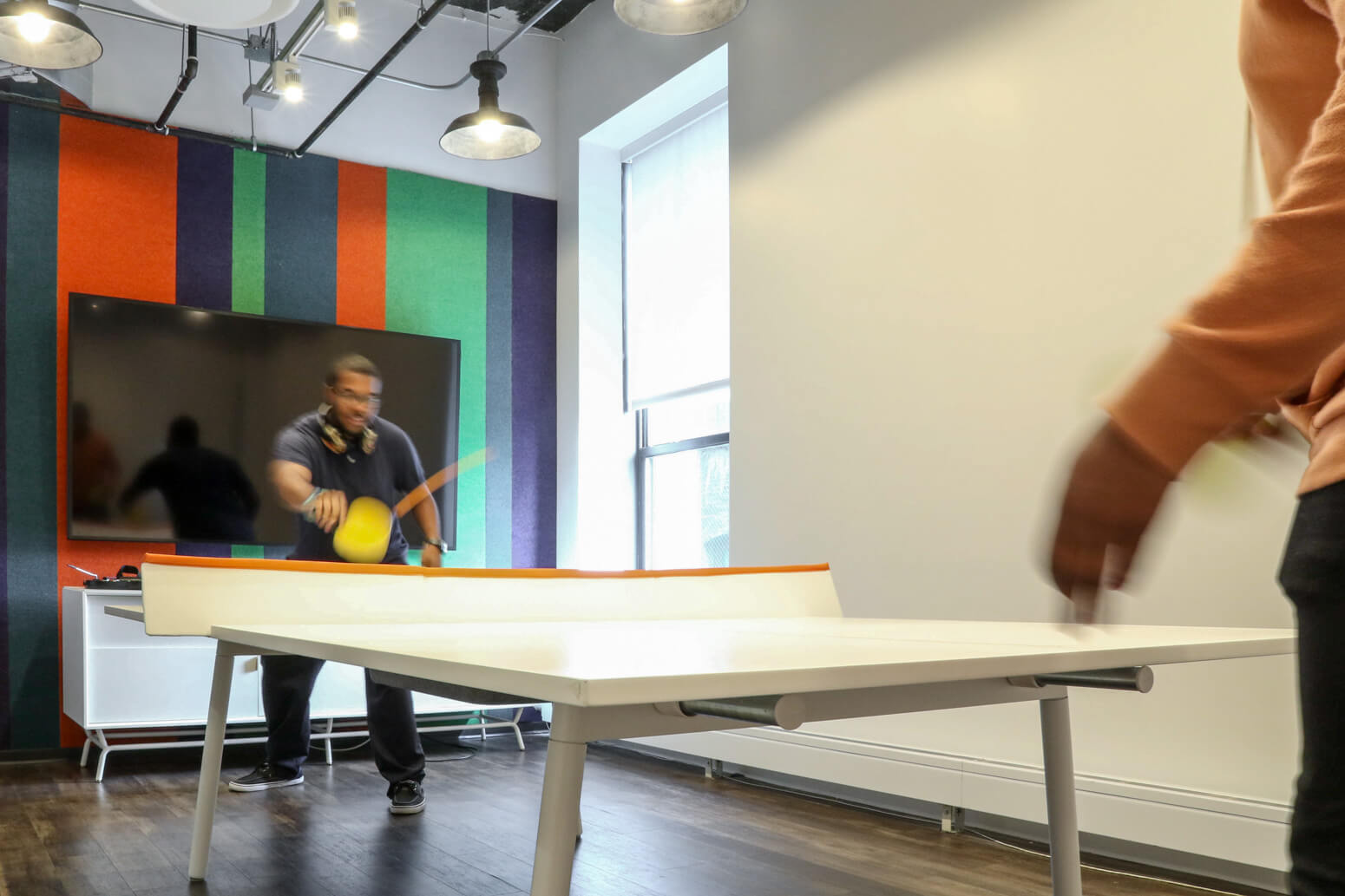 The building also boasts a semi-public rooftop terrace offering a sweeping vista of the NYC skyline, with Salesforce, Google, and Facebook all within what seems like reaching distance. 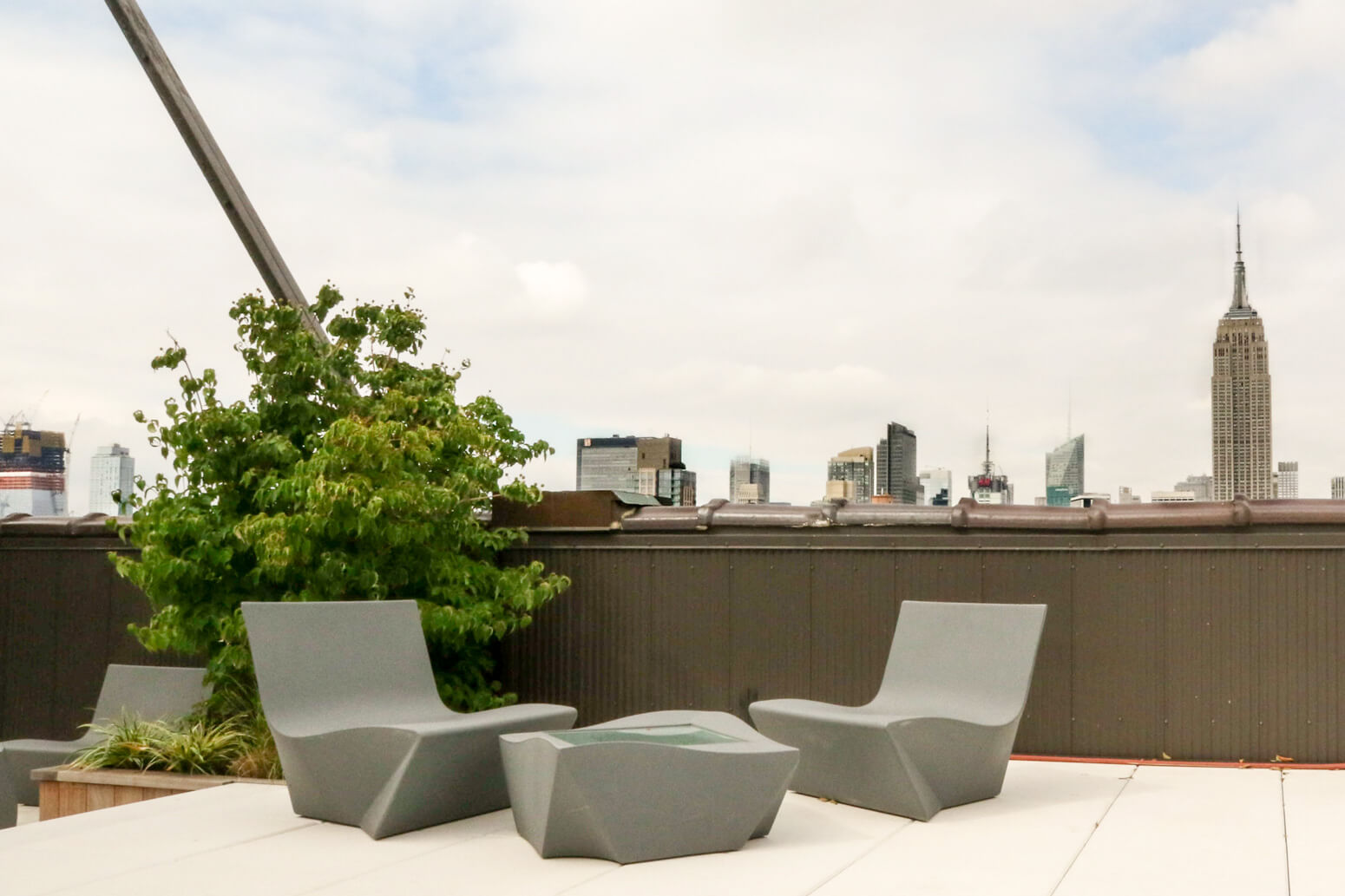