The worldwide wearables market maintained its upward trajectory during the first quarter of 2017, but not all brands are seeing equal success.

Xiaomi and Apple led all companies and products thanks to double-digit growth, according to the International Data Corporation Worldwide Quarterly Wearable Device Tracker, which shows companies shipped a total of 24.7 million wearable devices during the quarter, up 18% from the 21 million units shipped in the year-ago quarter.

With the Apple Watch may be staying strong, the Fitbit’s struggles continue: shipments are down 38%.

“Fitbit finds itself in the midst of a transformation as user tastes evolve from fitness bands to watches and other products,” says Ramon Llamas, research manager for IDC’s Wearables team. “This allowed Xiaomi to throttle up on its inexpensive devices within the China market and for Apple to leverage its position as the leading smartwatch provider worldwide. Now that Xiaomi and Apple have supplanted Fitbit, the next question is whether they will be able to maintain their position.” 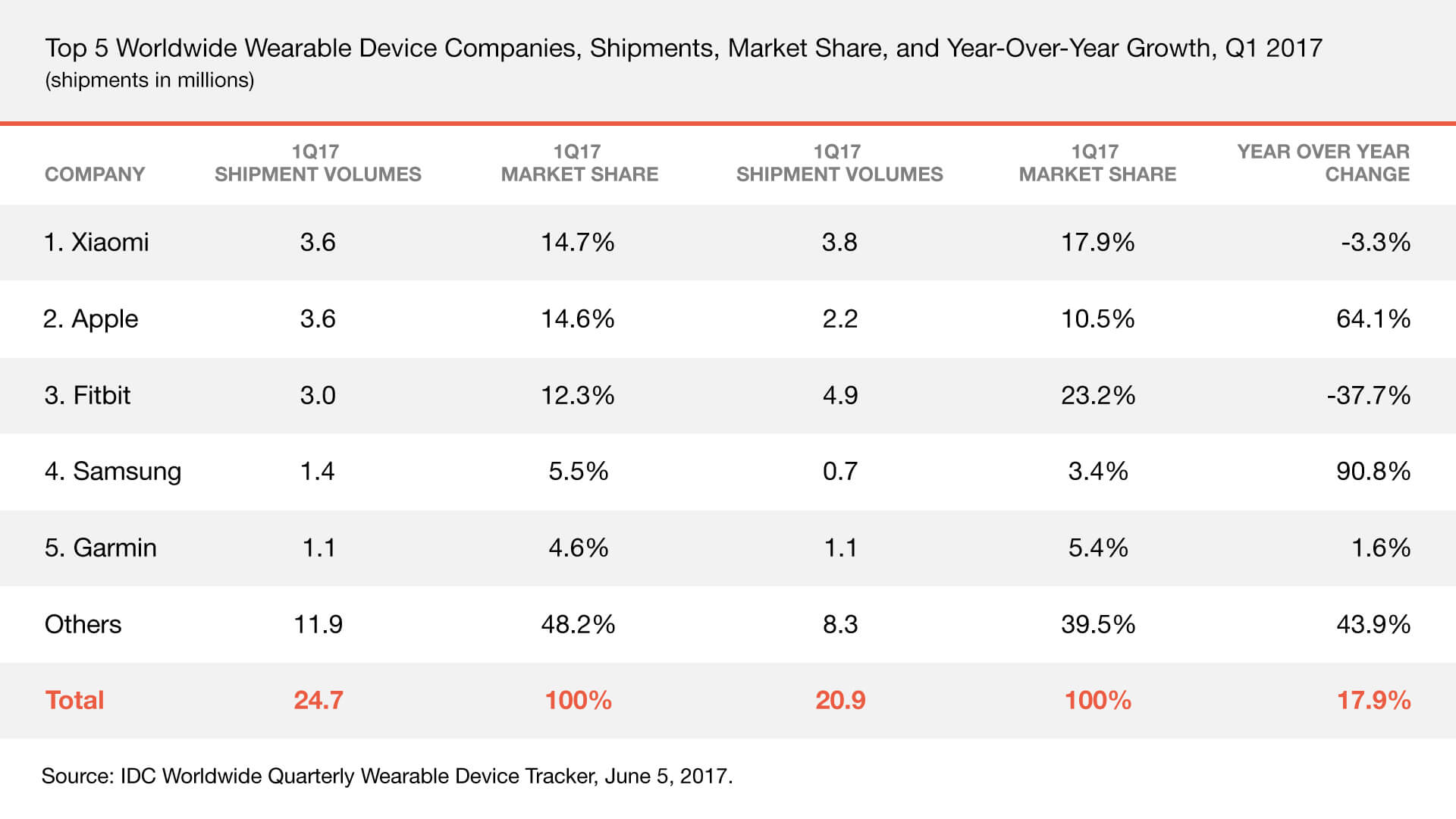 Apple saw sustained demand for its Watches nearly two quarters after the Series 1 and Series 2 versions launched to the market, and recorded the second highest year-over-year growth among the leading companies. The Series 1 and 2 have been a welcome change from the higher priced and undifferentiated experience found on the original Apple Watch from a year ago, attracting both first-time users and those seeking to replace their previous Watches.

“However, by no means should Fitbit be removed from the wearables conversation,” noted Llamas. “With a user base of 50 million, a strong presence within corporate wellness, and assets that keep it top of mind for digital health, Fitbit is well positioned to move into new segments and markets.”

Fitbit believes that there is market need for fitness trackers with the launch of its Alta HR and continued popularity of its Charge 2 wristband and Blaze watch. Moreover, its recent acquisitions of Coin, Pebble, and Vector are expected to translate into the company’s first smartwatch.

“The market is arguably still in the first phase of development, where companies are focused on seeding wearables into the market,” explains Jitesh Ubrani senior research analyst for IDC Mobile Device Trackers. “It’s all about getting people accustomed to the idea of wearing a device. And the opportunity remains very enticing for traditional and fashion watch brands as the scale of the consumer electronics market far surpasses their world.”

Samsung’s volume isn’t impressive but shipment growth is at more than 90%. Garmin, meanwhile, failed to grow, increasing shipments less than 2%.

“The second phase of development will be all about putting user data to good use,” continued Ubrani. “This is when step counts translate into healthier hearts and minds. And it’s also when we will start to see devices that actually augment our abilities and make our lives easier or more productive rather than just being another screen we keep an eye on.”