There’s nothing more fascinating than watching growth, and success in technology, or development companies. Ups and downs, big names on billboards, and chart-topping fun.

Cue Vancouver’s amazing and enigmatic Indie Game scene. Spin back the clock half a decade, and you would be hard pressed to find another city in North America with as much flavor, and potential as Vancouver did.

Now there’s a new breed of indie within our city, and it’s built on the fundamentals of passion and spirit. Where the independent heart once reigned, now lives a handful of developers attempting to remain true while facing the inevitable difficulties of success.

Enter Exploding Barrel Games. After a few extremely profitable years on Facebook’s gaming platform, Kabam came in and purchased the studio from Vancouver. Which as a whole, is valued at over $1 billion dollars today.

Now known as Kabam Vancouver, the situation and attitude within their walls hasn’t changed much since the acquisition in 2013.

“Humbleness is extremely important,” says Director of Studio Operations, Amie King, as we breach the subject of how difficult it can be to grow at a rapid pace. Which Kabam Vancouver has done slower than I’ve ever seen before.

But a humble structure is what they claim has kept them as close as they are, and as productive. Which can’t be an easy task as the studio has been behind the majorly successful mobile hit like Fast & Furious: Legacy, and the extraordinarily popular Marvel’s Contest of Champions. The latter of which might just be the best fighting game on mobile ever.

With a brand new office—roughly 30,000 square feet split across two floors—that includes every perk you could ever list, the team of leads at Kabam are doing what they can to ensure that their group isn’t letting their success change their fundamental working relationships. 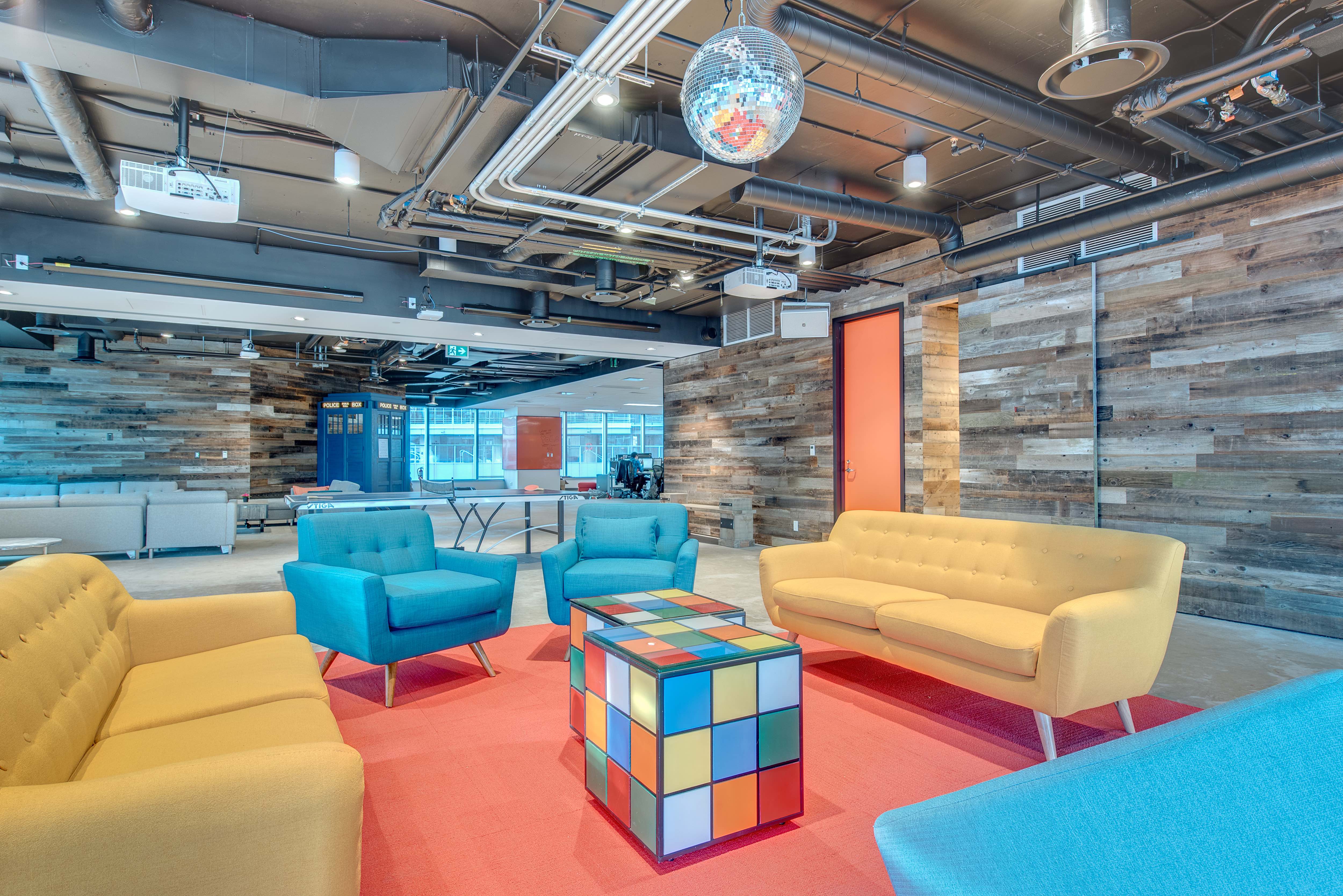 “We had a party at the Shangri-La, across the street, and they wanted to charge us $500 to rent their couches,” explained King. “I was like, no way. So we made our guys carry our couches around the corner and into the hotel for the party.”

It’s hard to walk into a spectacular example of a 21st century working environment—that looks, feels, and smells of a large budget renovation —and still act like you’re working at a company that is spurred by an “independent fantasy.”

Feeling a lot more like EA Games these days, the sensationalism presented at their new space on Thurlow and Alberni (the next big neighborhood for higher-scale tech companies) doesn’t accurately speak to their principals. They still champion a “small feel” and a “family friendly, and open environment” which aren’t typical terms used to describe companies that make games which gross hundred of millions a year.

Modular desks, and an open system of clusters makes for an impressively greased and conversational room. Within the Kabam Vancouver office are the teams behind Kabam’s Central-Tech, the Live Ops teams behind Marvel’s Contest of Champions and the upcoming Transformers game, and a large group of the community team.

When you first walk into Kabam, there are a lot of heads down, laptops on laps—where they belong—splayed across a variety of comfortable seating environments, and a nest of cozy meeting spots.

Nearly every surface in the newly renovated office is “writable,” creating a dynamic where ideas can happen anywhere, or anytime. There’s even a Lego wall for building, and spelling out words.

Being that they do not quite fill their new space just yet, there is a lot of opportunity to move around.

“Lots of empty desks right now. People can pick up their laptop, and move between the floors, or go sit in another spot,” said Jeff Howell, Chief Technology Officer at Kabam.

With a giant dancefloor, two full kitchens, a high-rise rooftop deck, and sleeping pods, it’s hard to think that this facility is a place of work, and not play. But there may be a delightful mix of the two churning the gears of a giant international studio.

Many (if not all) of the rooms built within the walls of the new office are modeled/designed after rooms you’d find in a normal house, or dream home. 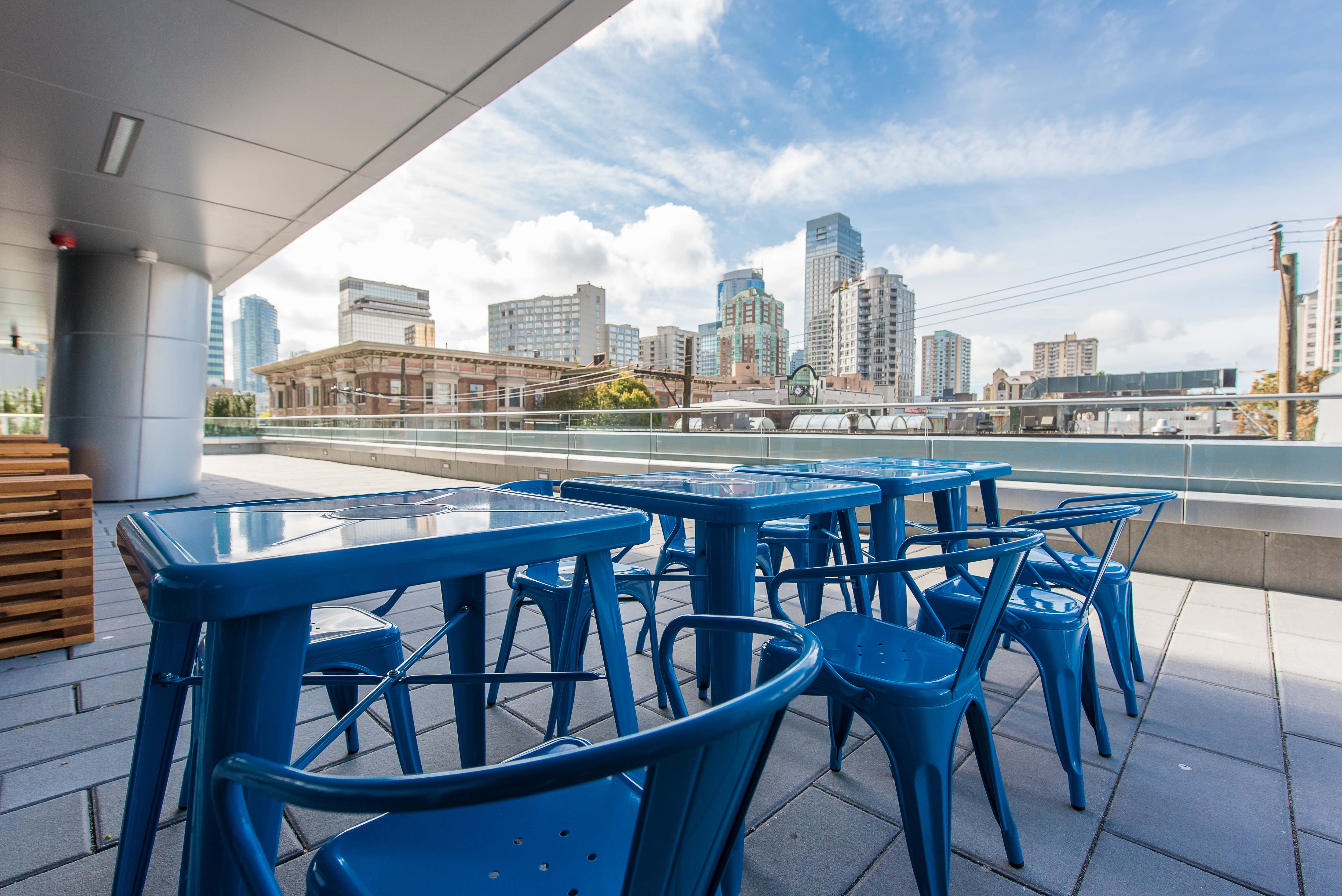 Around the first bend of the reception area—that is decked out in giant memorable ip logos and characters (that includes a monstrous metal statue of Optimus Prime)—is their “interrogation room”. A solidly sleek little interview space with a one-way mirror that attaches it to a classy room where those doing the note-taking can relax and observe.

“We use this space a lot for playtests. But also interviews,” said King.

There is a meeting room that looks like it was torn from the set of MadMen, decked out in stylish 70’s inspired furniture and a record player. An armory room with a long meeting table surrounded by a metallic feel and shield/sword combos on the wall—”very Game of Thrones.”

They’ve even built a hidden-door speakeasy for relaxing sips in a wind-down atmosphere for when those weeks have been a little more strenuous, and you’ve been tweeting “TGIF” all day.

But amidst the insanely futuristic new setting for the team is a ton of potential future reward. A studio that has developed games under the Star Wars, Fast & Furious, The Godfather, and Marvel, have been hard at work creating a high-profile Transformers mobile game.

What has been hyped as a “Massively Multiplayer Mobile Game”, Kabam has a lot of work to do pre-launch (slated to debut in 2017), which will hopefully turn into just as much work as the game transitions into live-operations.

Luckily, the team in Vancouver doesn’t have to worry about their facilities getting in their way. There is a lot of space to grow, and Amie King is still very keen on keeping things tight-knit, personal, and growing only when it’s a perfect fit.

“It doesn’t sound great, but we’ve left job openings up for over a year before…we won’t just fill a position because we need it,” King mentioned. Which speaks to why they’ve gone from around 30 people as Exploding Barrel in 2013, to just over 140 people in 2016. For those not aware, such inflation is almost unfathomably slow. In many occasions, big acquisitions would grow a company that much in a single year or less.

Kabam is doing the best it can to only intake those who fit their culture, and that have a passion that can and will expand the future of the company. It’s a model that I feel should be looked at, simulated, copied.

Thanks to Amie King, Jeff Howell, and the rest of the Kabam Vancouver team for giving us their time, and a tour of their new facilities.

Keep your eyes out for their upcoming Transformers game, hitting mobile in 2017.