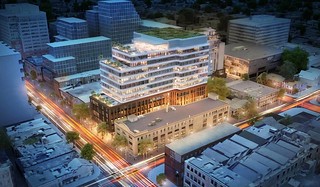 Just west of Toronto’s financial district, King Street will in three years be home to an office, retail, and residential site known as King-Portland Centre.

Ottawa-based ecommerce titan Shopify has committed to being the anchor tenant, taking up more than 100,000 square feet—or over 40% of the centre’s total space—according to CTV News.

Shopify, which went public last year, is rumoured to be a target of Google.