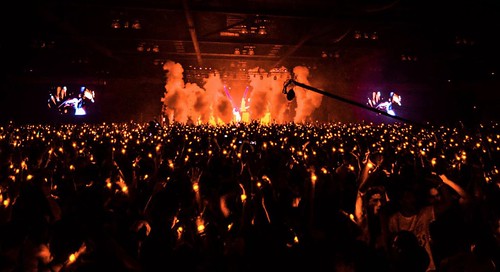 October was big month for PixMob.

The Montreal-based “crowd activation” startup was selected by four NBA teams to light up their season openers: the Sacramento Kings, the Los Angeles Clippers, the Cleveland Cavaliers and the Indianapolis Pacers.

This week these teams will transform their audiences into “a human canvas made of light,” according to the Canadian company, which has also used its technology to amplify experiences at electronic music events, Ferrari World, and even corporate events.

PixMob LED objects have lit up five million people in over 20 countries on five continents. The company recently more than doubled its headcount.

PixMob technology was first developed by David Parent and Vincent Leclerc. Named personalities of the year by Infopresse in 2014, their recent success is highlighted by Vincent Leclerc’s nomination amongst the 25 Leaders of the Quebec of Tomorrow by Les Affaires magazine and that of David Parent as a finalist for the 2015 Québec EY Entrepreneur Of the Year award.