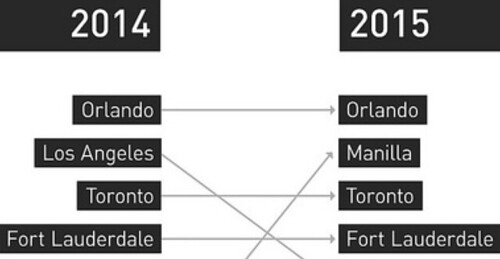 FlightHub recently released their top destinations for the holiday 2015/2016 season. This all encompassing FlightHub review featured flights from any departure area arriving at any destination.

Using this dump of data from FlightHub we did a yearly comparison of Canadian family holiday travel habits from the 2014 holiday season to the 2015 holiday season. This list differed greatly from FlightHub’s international list as Canadians have very different travel habits from the rest of the world, generally preferring continental destinations in Canada and the United States. By focusing on family travel as well we saw a huge difference, as business and solo travel make up a huge percentage of all travel.

From 2014 to 2015 there were only two new entrants to the list, with Vancouver and Calgary both entering the top 10 for family travel. While these lists have natural variations, there can be a direct link tied to this change. With the Canadian dollar struggling like it has, it comes as no surprise that Canadians are choosing to avoid the United States a little. Likewise, European destinations saw a small spike, as both London, UK and Manilla, Philippines saw their numbers rise as well.

With two new cities entering the top 10, that means two had to drop off. The victims of these changes were Delhi, India and Phoenix, Arizona. The drop in travel to India can very likely be tied to the security situation in the Middle East and Asia. Phoenix, Arizona likely dropped off due to the aforementioned issue of the Canadian dollar.

Now that we have covered the changes on the FlightHub list, here is how the rest of the results shook out. 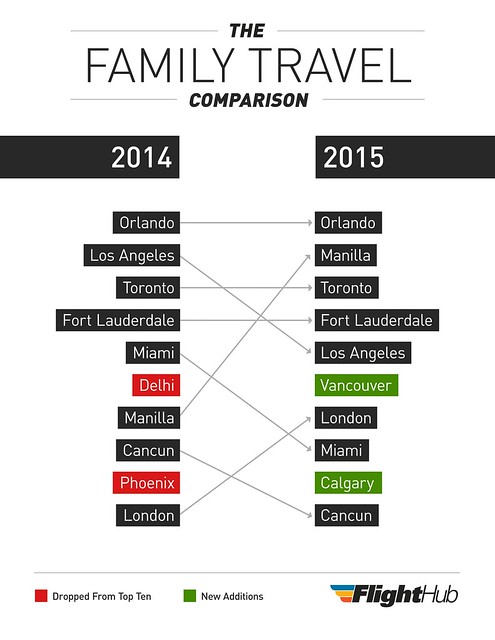 As you can see, the only constants on the FlightHub list were Orlando, Toronto, and Fort Lauderdale. Orlando, Florida maintained its grip on the top spot thanks to its prolific history as a top destination thanks to Walt Disney World. Toronto, Ontario and Fort Lauderdale, Florida each held on to the third and fourth spots respectively.