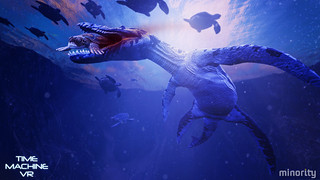 Virtual realty has yet to really hit the mainstream but 2016 might just be the year it finally does.

Devices like the Oculus Rift and the Samsung Gear VR have delivered on some of the promises of VR, they’ve been held back by a lack of content and their appeal hasn’t yet spread beyond early adopters.

That could be about to change. Games and experiences for VR were certainly drawing attention at the Montreal International Games Summit, a large conference for game industry professionals, held from Nov. 15 to 17.

While some were ports of existing games, other VR products are being developed specifically for VR devices.

“It’s a game we’re building from the ground up for VR devices,” says Rommel Romero, the media relations manager for Minority Media.

Players take the role of a scientist from the future who goes back in time to the age of the dinosaurs. And those dinosaurs are going to be pretty realistic, a palaeontologist from McGill University is working on the project.

Two levels of the game are currently available through early-access on Steam but much more work remains to be done.

Romero says building a game specifically for VR makes for a better experience.

While Time Machine VR has a first-person view, it’s definitely not a shooter. Players scan dinosaurs and prehistoric fish instead of killing them.

Speaking later at MIGS, Vander Caballero, the CEO and creative director of Minority Media says he wants to tell stories that promote empathy, instead of the “power fantasies” he worked on at EA.

He says that with VR players and characters can look each other directly in the eye, creating empathy and making it harder for players to shoot those characters in the face.

“The VR killer app is not going to be a shooter,” he says.

MIGS isn’t just about any one aspect of the games industry. It’s the type of event that puts college students, showing off the games they made for school, next to Ubisoft.

“This is our show, this is our moment of the year where we get to highlight and showcase what we do in Montreal,” says David Lipes, the president of Alliance numérique, the industry association for game makers in Quebec and the group that organizes MIGS.

The video game in Quebec employs over 10,000 people and counts some of the biggest names in the industry as well a large number of small and mid-sized companies.

Lipes knows about that first-hand, he also the co-founder and co-CEO of Budge, a mid-sized developer of mobile and tablet games for children.

He says the diversity of the industry and its ability to collaborate in spite of that has helped make Montreal such a hotbed of game development.

While there are challenges, he says industry as whole is continuing to grow and come up with new things.

“It’s investment in this innovation, industry wide, to push the limits, to do the most exciting stuff, to make highly interactive immersive experiences, how do you do that?” Lipes says. “In the video game industry, there are dozens of ways that’s being done, whether you’re wearing headsets, whether you have a microphone, whether or not you’re on a tablet, different ways to create that suspension of disbelief.”