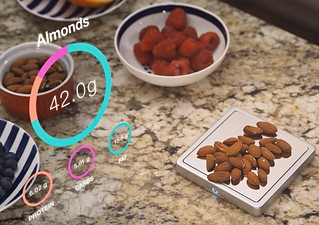 Monitoring your content and calorie intake can get complicated, if the apps or the wearables aren’t working for you – try the scale. Slate is the world’s first portable smart scale for nutrition.

The Calgary-based startup have developed a weight scale that connects to android and iOS devices through Bluetooth, and allows you to track calories, macro nutrients, and deliver information based on your serving size and type of meal.

Users simply place their food on the scale and enter a description into the app. Overtime, the scale will begin to recognize eating patterns, preventing manual re-entries.

The scale automatically taps into a large food database, allowing you to obtain information on calories, fats, proteins, and carbs delivered right to your smart phone.

Co-founder Rana Varma started the initiative a year ago, when he was told he had high cholesterol.

“I had this perception that I was eating ‘healthy.’ It turns out what I was actually consuming was in fact detrimental to my health,” said Varma.

The free Slate app also integrates with other apps such as MyFitness Pal and FitBit. Information will automatically sync with these apps, so users don’t have to record their nutrition in two different places.

In addition to the multi-app integration, the app also prompts users with curated recipes based on personalized goals.

“I needed something to track my nutrition with the same level of accuracy that I track my fitness activity,” said Varma.

According to the team, Slate is made for diabetics, competitive athletes, and the everyday person trying to monitor their weight.

The food journaling aspect of the app was very important to the team. With an aim for seamlessness, the app enables you to visualize your progress to achieve health goals quicker.

The scale itself is 5.5 x 5.5 inches and fits in the palm of your hand. It is designed for a food safe surface, and only has one button.

With coordination with the app, the scale can receive information to ensure accuracy. For example, understanding there is a plate on the scale before you weigh your food.

The product is ready for pre-order through their Indiegogo campaign (https://goo.gl/IMjdZ2)

The first milestone is to deliver the manufacturing run to initial supporters, beyond that Slate plans to expand into retail, while maintaining a global presence.

“Our success truly depends on how many people we can genuinely help and create a positive impact within their lives,” said Varma.