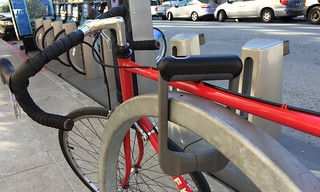 Sarbjeet Singh says he thinks your bike lock should know who you are.

Singh says he got the idea when he was on the way to work and one of his friends missed the commuter train.

“We’re all on the train and one of my buddies is still locking up his bike and missed the train because of that,” he says. “So we started thinking around how could you make that whole experience really, really simple.”

While there are other technologies that allow for keyless locks, Singh says they all require the user to have another object, like a cellphone or a wristband, in order to use them.

“The reason we went with the fingerprint sensor is that we want to make the solution really standalone, so the technologies for Bluetooth and NFC are really cool but they always rely on the object to be with you,” Singh says. “We really like the idea that objects can identify you.”

Grasp is currently crowdfunding the lock through a campaign on Kickstarter, just over a week into the 60-day campaign, it had raised almost $41,000. The goal is $70,000.

Singh says he one of the main reasons he decided to launch on Kickstarter was to gather feedback from customers.

He says questions about security and battery life have been more common than he thought.

As a result, Grasp is now planning to get third-party certifications for the lock earlier than planned.

Battery life was a big focus for Singh and his team while they’re were developing the lock.

“We spent three months designing the power circuitry on it,” he says. “The lock uses standard AAA batteries but it can last over one year with them. What’s really convenient with AAA batteries is unlike specialized batteries or rechargeable batteries, you can get them anywhere.”

It also means that users won’t ever be stuck at home because they’re charging their lock.

Singh has big plans for his startup.

“Beyond the project,” he says. “We want to be a security company.”

He wants to take the ideas developed for the bike lock and expand them to other environments.

“Our goal is to create security methods that really make it seamless,” he says, “imagine if your doors open for you because you showed up, but doing so without any sort of peripheral.”

Still, it all began with some fumbled keys and a missed train.

“Our project started off as a product that we could use on a daily basis,” he says. “We built it for cyclists, we built it for ourselves to make our commutes easily.

A single lock will cost backers $129.

This article is part of our Crowdfunding Spotlight Series, in which we profile some of Canada’s most interesting projects.