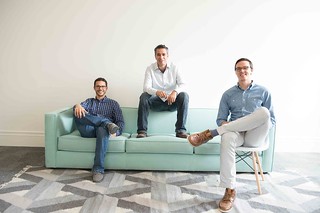 While Circle Medical is based in California and its app is only available in San Francisco, the startup has a strong Canadian connection.

“Two out of the three company founders are Canadian and we’ve been living in San Francisco for four years now,” says George Favvas, Circle Medical’s CEO.

Coming from Montreal, Favvas says understanding the medical system in the United States was a challenge.

“It’s complicated to figure out how insurance works and what doctor you can see based on the insurance you have,” he says.

That led him and co-founders, JS Boulanger (who is also from Montreal) and Brent LaRue to develop an app that would make visiting the doctor more user-friendly.

Out of what insurance companies pay for a patient’s visit to the doctor, Favvas says “only about 25 per cent of that actually goes to the doctor, the rest goes into the physical office and all the overhead associated with that.”

By cutting out those costs, doctors can make more money from each visit.

“What we figured out is a way to plug into the existing payment network so we can have doctors on our platform that accept insurance,” Favvas says. “By eliminating the brick and mortar cost, that allows a doctor to spend a bit more with the patient and travel to see them at their home or work without charging the patient anything extra.”

Favvas says that Circle Medical doctors are able to do everything they would normally do in a traditional office.

“It turns out that in terms of a family practice, you don’t need or use a lot of equipment, the reason family doctors practice in a physical office is not because there’s equipment there, it’s because, in the past, it’s been more convenient for the doctor to sit in one place and have patients come to them,” he says. “But with software and scale we can route them efficiently and minimize travel time so we don’t need the physical office.

Favvas says he has no specific timeline for expansion.

“Primary care in the U.S. is a $300 billion annual spend, so it’s a massive opportunity from a business perspective,” Favvas says. “The Bay Area alone is a $6 billion market, so there’s a lot of room to grow before adding new cities and there’s a lot of work to be done to get the platform to where we want to be.”

But despite the startup’s Canadian roots, don’t expect to see Circle Medical’s product expand north of the border.

“I think for the forceable future we’re going to want to stay in the U.S., there’s just so many differences in the systems, I think it would be a very different product,” he says. “The U.S. market is big enough, I think it’s going to keep us busy for at least the next couple decades.”