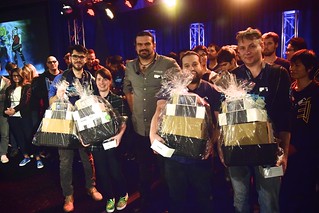 For a team of four Torontonians, the results of the 2015 BattleHack World Finals must have seemed like deja vu.

It was the second year in a row that Alex Christodoulou, Christopher Larsen, Ernst Riemer and Maya Kennedy came second in the international competition.

Organized by PayPal and its Braintree subsidiary, BattleHack is an series of hackathons that took place in 14 cities around the world. In each one, teams have 24-hours to create the best hack. The winners from each city then go on to compete for a $100,000 prize at PayPal headquarters in San Jose.

Winning the grand prize on Nov. 15, was a team from Venice, Italy, who turned their rental car into a smart car.

While teams are required to use PayPal, Braintree or Venmo APIs, the only other rule is that the hacks must have some sort of social good.

“If you’ve got APIs and you give people a challenge to do something with them, you end up with ideas you’ve never thought of,” says John Lunn, the senior director of developer and startup relations at Braintree and the main organizer of the event.

But it’s about more than just seeing new ideas, says Lunn, it’s about seeing how new ideas interact with his company’s APIs.

“From an R&D and development perspective, we have, in this case, nearly 3,000 hackers globally that spend 24-hours with us, using our APIs,” says Lunn. “The amount of customer feedback from the developers that you get is huge. That’s very, very valuable.”

As well, it’s a chance for PayPal to give developers positive feelings about the company and turn them in to ambassadors.

There’s also a bit of predicting the future.

“We’re also seeing from a market perspective what areas are in need of disruption by what bubbles up in all the different communities,” says Taylor Nguyen, global head of experiential and developer communications at Braintree.

The Venetian team’s winning idea, called ifCar, consisted of a hardware device, combined with a software app that can interface with any car and warn warn drivers if they’re parked illegally or automatically roll down a window if a child is in a hot car.

“Just being here is a big win,” says Cristy Gutu, one of the team members.

While his teammate Cristiano Griletti, says he wanted to work on a project involving cars, the idea didn’t come together until the team got two parking tickets because they didn’t understand the nuances of street parking in San Francisco.

“We said, we didn’t know, so the car should have told us,” says Caterina Vidulli, another team member.

The runners-up form Toronto developed a system designed to prevent identity theft and large-scale hacking attacks, like the ones against Target and Ashley Madison.

The system would replace passwords and two-factor authentication with a thumb-print based log-in.

To log-in to a website, users would scan their thumbprint with their phone and the system would verify the thumbprint, the computer and the phone.

That data wouldn’t be stored by the websites users are logging-in to, instead, it would be stored in a private server owned by the user with the website only storing a token.

The ideas is that if hackers broke-in to a company’s server, there would be nothing to steal.The system would also alert users if someone else applied for a credit car in their name.

Even before the judging was finished, the Toronto team knew they were up against tough competition.

“Every year, as it gets more and more popular, it gets more competitive,” says Christopher Larsen of the Toronto team, “and it’s only going to get worse from here on out.”

For the judges, it was a difficult decision, says Lunn, he says the “potentials and possibilities” of the Italian team’s development, as well as the team’s skills was what set it apart.