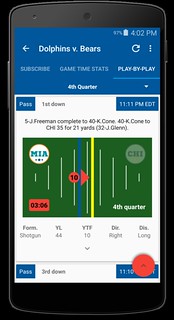 According to the Fantasy Sports Trade Association, Americans spend $15 billion annually playing fantasy sports online with approximately $11 billion of that amount being spent on fantasy football.

The NFL’s annual revenue falls just under $10 billion currently which means the “derivative” market has grown larger than the foundational market. That’s nuts.

Fantasy football is huge and fantasy football fans are huge consumers of data, whether it be stats, commentary, or video. And they do this everywhere, especially on their mobile devices.

Unfortunately the NFL has not served the mobile market well. Their own NFL Mobile app has almost 50 million users and continues to get flamed in the reviews by diehard fans that expect more.

Leveraging big data to build in-depth statistical analysis and projections for sports fans and fantasy players is a fairly new concept for mobile. A disconnect exists in this market between the vast amount of statistical sports data and an efficient way to display the data.

OnPoint is an elegant delivery system to bridge this gap. According to Ferrara, OnPoint’s data engine delivers live NFL data faster than the NFL network itself, and faster than any other mobile sports data provider.

Using the latest and greatest mobile design principles OnPoint delivers a mobile experience which caters to casual fans all the way to the most hardcore sports fans and fantasy gurus.

OnPoint’s ability to crunch, organize, and deliver data is what makes it unique. And it’s only a matter of time until the NFL takes notice.

OnPoint Sports is now available for NFL on Android in the Google Play Store. An iOS NFL app is upcoming as well as MLB on both platforms.