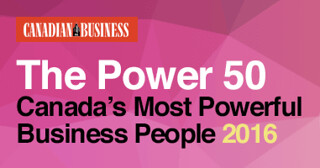 Each year, Canadian Business compiles a list of the executives, entrepreneurs, politicos, and thinkers who are changing the way Canada does business.

Last year OMERS Ventures’ John Ruffolo was named Canads’a Most Powerful Business Person but this year he has been bumped to the #3 spot by Alberta Premier Rachel Notley and Mark Wiseman of the Canada Pension Plan Investment Board.

However Ruffolo’s influence doesn’t go unnoticed on this year’s list.

And Canada’s next great tech IPO CEO was named #24. Ryan Holmes of Hootsuite (another company bankrolled by Ruffolo) showed Vancouver can compete with Silicon Valley.

Other notables on the list include Justin Trudeau at #4 and BlackBerry co-founders Mike Lazaridis and Jim Balsillie at #5 and #13 respectively.

Newly minted billionaire Markus Frind of Plenty of Fish was slotted at #29 followed by Unicorn jockey Stewart Butterfield at #37.