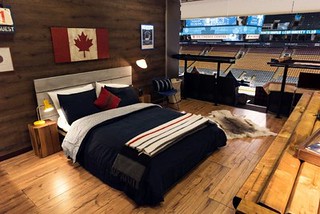 The winner will get special access to back-to-back games starting with a Leafs game against the Montreal Canadiens on January 23, 2016, spend the night in a customized suite in Air Canada Centre, and a Raptors game against the Los Angeles Clippers the next day.

“The Toronto Maple Leafs and Toronto Raptors have some of the most loyal and passionate fans in the NHL and NBA,” said Aaron Zifkin, Country Manager for Canada, Airbnb.

“Airbnb is pleased to offer the first ever overnight experience at Air Canada Centre in a customized suite while also providing an unprecedented behind-the-scenes experience.”

Additionally, it includes an exclusive Maple Leafs pre-game experience with a behind-the-scenes tour of the venue, a shopping spree at Real Sports Apparel, access to the players’ amenities, a chance to watch the pre-game skate from the penalty box and a personalized player send-off in the Maple Leafs tunnel as the team takes the ice.

Before returning to their Airbnb suite for the night, the winner will also be invited to attend Head Coach Mike Babcock’s postgame press conference.

After spending the night in the customized Airbnb suite overlooking the lower bowl, the winner will take in the Raptors’ gameday shoot-around before wrapping up their experience, watching the Raptors take on the Clippers in courtside seats on January 24, 2016.

Airbnb, on behalf of the Toronto host community, will be making a $15,000 donation to MLSE Foundation, a charitable organization that helps get kids involved in sports in their community. The donation will support the Sport For Development Centre, a 42,000 square foot youth-focussed centre located in the Moss Park neighbourhood of Toronto.

For a chance to win the ultimate Canadian sports weekend experience, visit the Air Canada Centre listing on Airbnb and “Tell us why you’re the biggest Maple Leafs and Raptors fan and what it would mean to you to stay overnight at Air Canada Centre.”