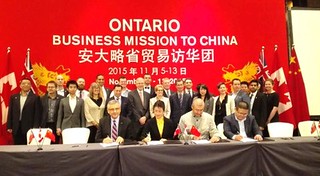 “We are pleased to be able to strengthen our partnerships in China through this new agreement,” said Dr. Tom Corr, President and CEO of Ontario Centres of Excellence. “By connecting with the hub of high tech activity in China and new investment opportunities, even more Ontario companies will have access to the tremendous opportunities the lucrative Chinese market possesses.”

OCE and CCAA are currently partners in the successful China Angels Mentorship Program (CAMP) that has seen 10 Ontario companies benefit from investments of more than $2 million as well as mentoring and training on how to access the Chinese market. The companies were in China for a two week training session and also attended the signing ceremony.

“The CAMP initiative has already brought many companies to the attention of investors resulting in deals,” said Mr. Zhishuo (Peter) Liu, Founder and President of CCAA. “With technology being such a priority today, the addition of these two partners will bring greater success for entrepreneurs and investors alike.”