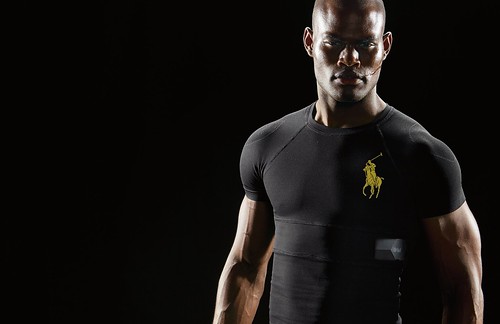 The lights are dim and the music is blaring. The model walking down the runway is unbelievably tall and looking straight ahead.

To the outside observer, this catwalk could belong to any fashion show. This crowd, however, knows that what this model is showcasing is not the latest Joe Fresh design. It’s an earring designed to track your activity throughout the day. This data can be uploaded to any iOS or Android phone, is intended to help women better plan their fitness routines.

The company that designed the world’s first smart earring is a startup by the name of Ear-o-Smart, and they’re set to launch this product officially in the next few months. Among them, several brands are present tonight that wouldn’t be found at any regular fashion show, including Daniel Christian Tang, a luxury jewellery brand designed using 3D printing software, and Muse, a brain sensing headband that customizes your meditation ritual.

Several of these brands, however are looking to break into mainstream retail markets, and some, like Daniel Christian Tang, already have. Holt Renfrew will debut the team’s latest line before the end of the year.

Startup Fashion Week is an annual fall event that takes place at the end of September. This year’s show and startup mentoring presentations were a success, but the merging of fashion and technology has been happening for far longer than we realize.

“Many companies and big brands have already tried doing it. Sometimes it just takes trial and error to do it right. Way back when there were coats where they integrated the ability to plug in your iPod. Those things existed many years ago. It’s just about evolving with consumers and trying to find the right solutions that people are looking for and willing to experiment with,” said Jodie Goodfellow, the founder and director of Startup Fashion Week.

It was five years ago, during her first attempt at starting a business, that she found the connection between fashion and technology and decided to pursue it. She initially tried to launch an online platform called Fashion Forward for selling pre-owned clothes that still had value, referring to the project as an ebay with a fashion focus.

However, Goodfellow was still a full time art teacher with the Toronto District Schoolboard, and at this point was putting twice as many hours into her startup as she was into her full time job. Though she wasn’t able to grow that business to where she hoped it would be, along the way she made an effort to attend startup events for fashion and tech.

She herself had the opportunity to host Fashion in the Digital World, which would eventually grow into what’s known to industry regulars today as Startup Fashion Week, where she’d invite startups like herself to make presentations about their journey merging fashion and technology. After hosting Fashion in the Digital World just three times the guest list had grown to over 120.

“I knew I was on to something there. A lot of people were really engaged and curious and interested about how these two worlds were colliding,” explained Goodfellow. So, she took action.

“I decided to take all of the networks that I had built from going to various events and all the things I learned about starting a business to create a bigger event that would support startups the way they need to be supported,” she said.

Cofounder of Ear-o-smart Ashlyn Bird goes one further in saying that there are very few wearables designed for women, and they’re looking to change that.

“Most wearables are unisex, but future trends indicate that women are going to become larger players in the wearables market. We’re just tapping into a market that already exists,” Bird said.

Ear-o-smart monitors heart beat from the ear lobe and syncs with any iOS or Android phone using Bluetooth. The startup just recently introduced their ear-o-smart backings which allow any earring to be turned into wearable tech. The earrings themselves cost $200 while the backing hasn’t yet been priced.

“It’s versatile,” explain Bird. “You can wear it from morning till night. It will take all your daily activity into account and suggest a workout for you based on that day.”

She goes on to explain that many women like the privacy associated with a health product that blends in to your everyday wardrobe. A staunch emphasis on technology’s gradual entrance into the fashion industry recognized while conducting research and developing this product, she says.

Tom Emrich, owner of wearable tech community We Are Wearables thinks that wearable tech can appeal to both a fashion crowd and a tech crowd. He speculates that in order to bring fashion and technology together in the retail space, developers may need to take a style-first approach.

“In order for people to be interested in wearable tech, people need to want to wear them. If you look around the room,” Emrich says as he gestures to the companies present at Startup Fashion Week, “I would say that this could be a fashion crowd first, but they’re being introduced to the Motorola watch or Daniel Christian Tang.”

Even Robert Currie, the Vice President of Mobile Devices at Telus agrees that wearable tech is changing both the fashion and technology landscapes.

“We are really seeing how quickly fashion and tech is merging. Fashion accessories and wearable tech is changing the market for us,” says Currie. He goes on to say that technology accessories sales at Telus have gone up 200 per cent over the past year.

Wearable technology is not a new idea. This market has been thriving in a niche corner of the Canadian economy for over a decade. However, in the sales space, it’s almost always been assumed that technology and fashion would never, could never, mix.

Following the work of individuals like Goodfellow and Emrich has proven that the techies and the fashionistas of the world can finally come together.