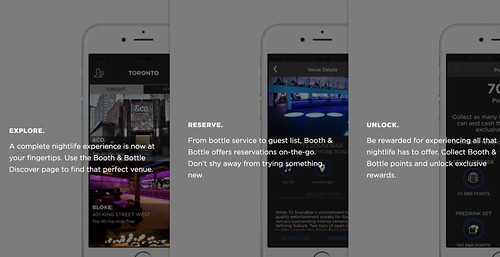 Matthew Marji and Ernesto Gaita want you to get out and enjoy yourself—and they have just the app to help you do it.

Booth and Bottle is a bottle service and venue reservation app available to those looking to have a good time in the Toronto and Greater Toronto areas. Marji wants Booth and Bottle to be the go-to service for Toronto’s nightlife crowd.

“Booth and Bottle actually started as an idea in 2013 when we realized that it was difficult for anyone who’s new to nightlife to book venues. The process these days can be very difficult,” said Marji.

He also says that their customers go to them as a more secure option to traditional booking methods: “It can become very sketchy when you have to send someone your credit card information through text. It can really be a difficult process.”

In 2013, Marji began developing the concept for a nightlife app that would take the customer smoothly through the process. Gaita was brought on in January of this year to help with the group’s networking. Thus far, this endeavour is entirely bootstrapped.

The team is looking forward to being a presence in the Toronto nightlife community. As one of the most dynamic entertainment districts in Canada, Toronto is a prime location for them to get Booth and Bottle off the ground. With almost 2,000 users after being operational for just over a month, they’re on the right track.

“What’s great about Toronto is that it’s such a hub in Canada for nightlife. There’s really no place like this here in Canada so this really is an amazing place to start. Our belief here is that if we foster it here in Toronto then expanding out into Montreal, and maybe to the US and then Europe should not be a problem once we’ve mastered it here,” said Marji.

As a result of their projected success in Toronto, the team isn’t ruling out the potential to expand their services to other cities in the future. According to them, where the students go, they’ll follow.

“I’d say one of the main things that we’re working towards is expanding out into local areas. From Toronto we’ll go to where university students go out. So Hamilton, Montreal and Waterloo are all places we’d love to go to,” said Marji.

Not only are they getting the attention of Toronto youth, but Gaita explained that venue owners are intrigued when they first approach them about featuring their location on the app. The duo says that a several venues actually approached them first upon Booth and Bottle’s official launch.

He goes on to say that customers are pleased to have found a service that helps them navigate the sometimes convoluted world of Toronto’s club scene.

“It’s really easy to use, you can book pretty much whatever you want at night in seconds. We’re pretty much the first one in Canada to do both guest list and bottle service. There are other apps in Canada that cater to nightlife but not in the same way that we do,” said Gaita.

So far, 16 venues have registered with Booth and Bottle. However, while building the roster, Marji, Gaita and the other members of their team made sure to include venues from the Greater Toronto Area as well, so as to cater to a larger audience.

“We’re working on bringing a variety of different venues to people, so no matter what you’re feeling there’s a venue that fits,” said Marji.

Both Gaita and Marji are still in school and are hoping to continue developing Booth and Bottle after they graduate. Through it all, these two young entrepreneurs have no regrets and just one piece of advice.

“Do something you’re passionate about,” they both emphasize almost in unison. “We’ve really just been doing this with lots of love and time. What you see is really just a lot of hard work.”