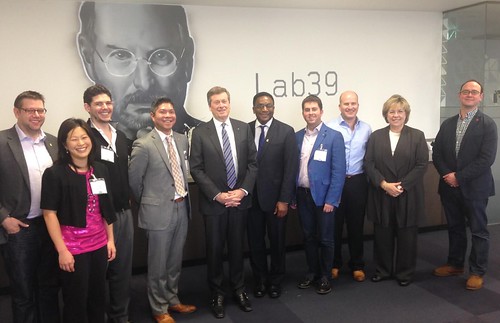 Alongside Ben Zlotnick, founder of tech startup accelerator INcubes, Tory’s inaugural trip outside of Canada was in part to show off Canada’s fin-tech innovation in England.

Joining the mayor was Karl Martin, the CTO of Nymi; Rene McIver, the CSO of Secure Key; Eva Wong, a cofounder of Borrowell; and Adam Katz, the CEO of Kooltra.

The trip included an at the High Commissioners Office – Canada House, which is located next to Trafalgar Square, and a stop at Barclay’s Techstars Accelerator in White Chapel to see what local companies were doing. The group also checked out Level 39, which is Europe’s largest technology accelerator for finance, retail, cyber- security and future cities technology companies.