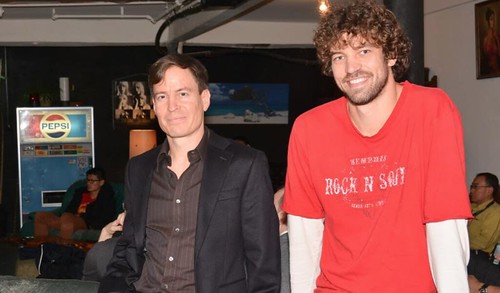 On a recent night, computer-controlled lights were using old sidewalk glass prisms to play Tetris alongside a street in downtown Vancouver. Underneath the pavement and the adjacent hair salon, a Bitcoin ATM sat in one corner while coders gathered for a meet-up about the Go programming language.

This ramshackle basement is home to Decentral Vancouver. Opened in 2014, Decentral is a Bitcoin-inspired community incubator for decentralized-technology projects.

“It’s evolved from a bunch of guys hanging out to making cool things happen,” Decentral cofounder Freddie Heartline said during an interview. “We’re looking at moving to a different space soon. We’re looking at going to an above-ground, windowed situation in Gastown.”

Heartline was joined by Taylor Singleton, a member of Decentral and a developer for Blockchain Tech Ltd. With staff in Vancouver and London, the company aims to use cryptocurrency technology to transform the remittance industry.

Created in 2009, Bitcoin is underpinned by its blockchain, the distributed ledger that records all of the digital currency’s transactions. As of October 23, one bitcoin was valued at around US$277, and the almost 14.8 million bitcoins in existence were collectively worth US$4.09 billion.

In a backroom, Heartline and Singleton sat down with Techvibes for a Q&A about Bitcoin and the future of blockchain technology.

1. How do you describe Bitcoin to the uninitiated?

Freddie Heartline: “Bitcoin is a frictionless form of payment, and the technology under it is very, very beautiful and elegant.”

Taylor Singleton: “Bitcoin is the first time we’ve ever had digital scarcity. So it’s the first time that a digital asset can meaningfully be transferred from one person to another.”

Heartline: “Each digital asset has its own identification, basically, so it can’t be replicated.”

2. What is the most exciting recent development in Bitcoin or blockchain technology?

Singleton: “For me, what my eye is on is something called the Lightning Network. The Lightning Network is a way to use Bitcoin as a settlement layer. Rather than putting every single transaction on the blockchain, it just uses the blockchain as the backend if there is a dispute between people sending money between each other. If there isn’t a dispute, then the transactions can remain off-blockchain, which increases the anonymity of Bitcoin and decreases the cost of using it to nothing. So I don’t know how far out that is—probably a year or more—but the developers are working on some really cool stuff.”

Heartline: “I think the user experience on the consumer level is becoming better very quickly. That, to me, is very exciting, because I want more people using it and more people actually playing with it. It’s nice to see that wallets are becoming a little easier to use day by day.”

3. What’s an altcoin that’s really on your radar right now?

Heartline: “Ethereum—it’s super dynamic and has a lot of promise. We’re mining it here. I’m a big proponent of it. We would like to see where it ends up. They just released a wallet finally that we could use and get off the command prompt. There’s an interesting thing called EtherScripter. You can actually build a contract using little puzzle pieces on your computer screen. You drag the puzzle pieces from here and here, and you connect it together. It actually does the computation underneath it. It’s a graphic user interface.”

Singleton: “I’m very much a Bitcoin purist. I believe that the innovation in the blockchain or cryptocurrency space came from Bitcoin, and Bitcoin is by far the leader still. The foundation of cryptocurrency is distributed trust and anticensorship and security, and all these things are maximized with Bitcoin. I’ve seen nothing in the alt space that really excites me. What I see in the future is Bitcoin starting to be used as a currency. Not everybody thinks that, but that’s where I see the space going. I think the altcoins are really a distraction.”

4. Where do you think the price of Bitcoin will be in one year?

Heartline: “I think we’re looking at a doubling in one year. That’s my projection. The last halving, we went from US$100 to US$1,200, but also the Chinese market blew up around it as well.”

5. Where does Vancouver fit in the global Bitcoin scene right now?

Heartline: “There’s some interesting theory that’s coming out of here right now. We have a lot of development as well. This is a decentralization hub. Where I think Vancouver is really ahead is a lot of the dreamers are in this city. There is some quiet development going on behind the scenes, but I’d say what’s really interesting is the concept development that is happening around here.”

Singleton: “Compared to my home in Calgary, there’s a lot more people talking about what this technology could do, and there’s a lot more meet-ups like this community. I think, although it’s still small here, we are leading the way in terms of a lot of things.”

Heartline: “I really believe that decentralization of technology and data and value and everything is going to be a massive part of the future. We use Uber and banks as a centralized medium right now. I think it’s going to be radically different in the future.”

Singleton: “You really need to consider what money is. As we go into the future—10 years, 20 years, 30 years—the money supply of all the major currencies is going to continue to increase and, on average, the price of everything is going to go up. That’s just the nature of our current money system. Bitcoin is a fundamentally different money system that over time will remain constant. Over time, if it continues to exist—I believe the technology is strong enough—then it will become recognized as a store of value that is better than a traditional currency.”