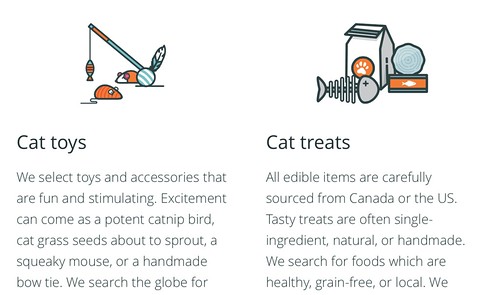 Olivia Canlas and Francois Deschenes are self-proclaimed cat people. If the four cat tattoos on Canlas’ arm doesn’t give it away, the success of their startup business meowbox surely does.

After discovering that there were subscription boxes for both dogs and people, but none for cats, Canlas and Deschenes knew they had an opportunity to fill a void. Each box is filled with 5-7 items shipped from around the world. They believe the personalized aspect of meowbox, including handwritten cards

“There was nothing! There were boxes for dogs, people, cats and dogs, but nothing for just cats,” said Canlas.

The co-founders have three cats themselves and have both recently quit their day jobs to run meowbox full time. Deschenes handles the software side of the business and Canlas takes care of meowbox’s online presence. They’ve recently been able to hire their first employee.

Pitching to the Dragons’ Den was exciting, said the duo. They describe the process as much more relaxed than one might imagine. After applying online, Canlas received an email back strongly encouraging them to audition in person.

After flying down to Toronto and pitching to a group of producers, they were invited to appear on the show.

According to Deschenes, as he demonstrated meowbox in the Dragons’ Den, over 15 million households across North America spend more than $50 a month on their cats. Then, the team asked for $150 thousand for 15 per cent of their business.

They brought with them a box of five kittens, including their own. While the dragons are smitten with the kittens, Canlas and Deschenes show them the numbers: an overall profit of $340,000 and a growth rate of 10 per cent per month.

At the end of the segment, Canalas and Deschenes land a deal of $150,000 for 20 per cent of their business with Michele Romanow and Joe Mimran.

“You can’t pretend to know cats if you don’t have them. You can tell if someone knows whether a cat would like the product,” she says.

Canlas states that Deschenes has been a valuable asset because of his knowledge of web and design software. The $1,000 cheque that started the business could have easily reached far greater heights without someone with that expertise. They state that now, with the widespread accessibility of the internet, starting a business is nowhere near as difficult as it once was.

With their quickly growing online presence, particularly an Instagram account that now has 333,000 followers, the business grew quickly and organically.

Though, they were concerned when the business didn’t immediately take off. They began the business in January, 2014 and expected 200 subscribers by month two. When they only had 40, Canlas began to panic.

Fast forward a year and a half, and they’ve acquired a few small cat-only companies and they’re looking at expanding their services to include a dog-equivalent: barkbox.

Furthermore, for every meowbox that’s purchased, the company donates one can of food to a cat shelter, and they have a system in place to tell their customers where their donations are going.

“We wanted to let people see where they’re making a difference.”

They conclude by saying resoundingly that through their success, they need each other to keep succeeding.