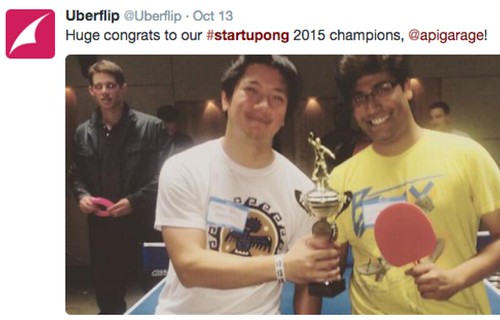 Networking, beer, popcorn, and occasionally being the target of a rogue ping pong ball. That’s the experience at Startupong. Tuesday, Oct. 13 was Startupong’s second annual event, which promises to bring the Toronto tech community together in true startup fashion: through ping pong.

Though all the beer and white ping pong balls, may make you think you’re a house party, this really is a networking event. Started by Uberflip in 2014, this year’s startup ping pong tournament saw 658 attendees.

“Too many events are focused only on founders,” says Uberflip CEO Yoav Schwartz. “Startupong is for everyone else, people who are part of a startup now or looking to move into the startup world.”

While the event is a good way for people new to the startup scene to mix and mingle in a more casual environment, Startupong also raises money for a good cause. This time, they raised over $2,500 for the SickKids Foundation.

Some of the startups playing in this years tournament included Shopify, Hired, 500px, and Ritual. The Startupong 2015 champion was API Garage.