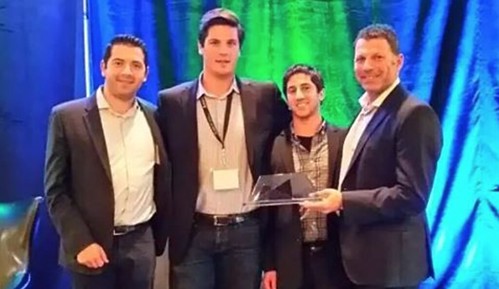 Portray Advertising is the winner of the Most Promising Startup of the Year Award at the annual NACO National Angel Summit.

The Winnipeg-based company competed against 15 other startups for the award after a day of pitching and a final five-pitch competition.

The judging panel was made up of angel investors and venture capitalists.

“It’s extremely humbling to be presented with NACO’s Most Promising Startup of the Year Award,” said Kyle Boult, Managing Partner of Portray Advertising.

Portray Advertising has developed a proprietary transparent cafeteria food tray that allows retailers, brands and organizations to insert relevant communications in the interior.

More than 350 Angels from across Canada attended the annual NACO Summit in Niagara-on-the-Lake.

SurfEasy was awarded NACO’s Exit of the Year Award, which recognizes the most successful exit achieved by a Canadian startup that received financing by one of NACO’s member Angel groups.