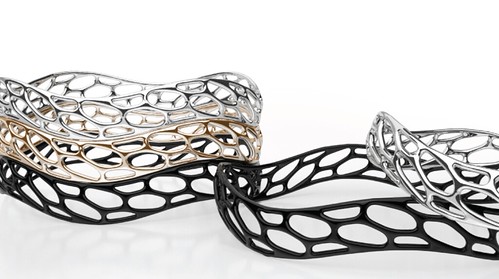 Fashion and technology were once polar opposites. The emergence of wearable technology has brought these previously feuding industries together, and much to everyone’s surprise, they seem to like each other.

Soon, consumers everywhere will have access to the advanced architecture that is luxury 3D printed jewellery, and Daniel Christian Tang wants to make the transition to wearable tech as seamless as possible. To the average buyer, a Daniel Christian Tang original simply looks like a beautifully crafted way to treat yourself, or a special someone.

Little do they know that each piece is coded to perfection and designed so precisely so as to ensure it can never be duplicated. Mario Christian, Designer and Business Development Director for Daniel Christian Tang says that we can expect to see a lot more from this brand in the future.

“We just happened to choose jewellery, but jewellery is just the beginning,” said Christian.

Their brand consists of three founders; Mario Christian, Heng Tang and Luca Daniel. Tang and Christian are both graduates of the John H. Daniels Faculty of Architecture at the University of Toronto while Daniel is a structural engineer, who studied at Waterloo. Every piece is designed by Christian and Tang while Daniel handles other aspects of production.

“We had access to 3D printing before a lot of other schools,” said Christian. It was while completing his degree that he and Tang met and began experimenting with 3D printers.

Inspirations for the brand’s most well-known collections, such as the GRID and HIVE lines, came from competitions the groups entered while still in school. After working diligently at building the brand for years, launching on the Shopping Channel this past summer brought the group almost immediate success.

The group has since struck a deal with high end fashion retailer Holt Renfrew and their latest collection, Morfologi, will officially launch on November 2, 2015. Items from this collection will cost between $149 and $1199.

Furthermore, there can be no doubt that this emerging approach to accessorizing is completely original. “The best part is, that no one could ever duplicate it unless you have the code file,” said Christian. Every piece of jewellery is originally coded and reproduced only 50 times. “Each one is a completely individual piece.”

3D printing is still rather new however, meaning that the thinnest areas of a print can’t be less than 0.88mm. All the pieces are silver-based and either 18 karat gold, rose gold or platinum plated.

The group will be participating in Startup Fashion Week until October 9, 2015, which is dedicated primarily to wearable tech and fashion startups. Daniel Christian Tang believes strongly that the fashion and technology industries will continue to collide with each other. However, the team also thinks there may be a few obstacles along the way.

“The only problem is, the type of software that you need to design this stuff is really, well, nerdy. The designers in fashion are not there from a tech perspective,” said Christian.

With the visible rise of wearable tech, Christian predicts that members of both fields will either have to work together or learn from each other. He notes that design schools such as OCAD are starting to push tech literacy in their curriculums.

“All the wearables that we’ll see in the future will have some kind of tech component. I think it’s honestly the future of every single piece of consumer technology.” This team is eager to move beyond jewellery. They’re currently exploring the possibility of furniture and table-wear.

With the introduction of the Fitbit and Ear-O-Smart, the emergence of a wearable tech market is easy to spot, but – considering the novelty of this market – difficult to track. Christian predicts the eventual merging of fashion and tech as a result of our desire to live digitized, modernized lives.

Christian predicts that we’ll soon be seeing wearable tech in the storefront windows of everyone’s favourite brands. Perhaps mannequins everywhere can look forward to an upgrade – and soon.