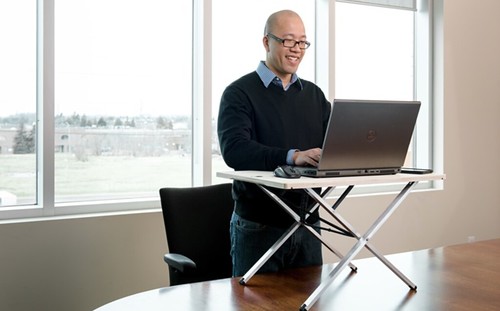 We don’t know why anyone needs a robot arm (it’s just the robot arm) but we want one.

The robot arm comes as a kit and after it’s been assembled, users can control it with a game-pad type controller and some software.

For a robot, it looks pretty dexterous.

Early backers can get the robot arm for $265. The campaign is just over one-tenth of the way to its $50,000 but there’s over a month and a half left.

Here’s a subscription snack service that delivers snacks right to your house. The snacks are prepared in Vancouver but they ship all over the country. There’s also some nice social benefit, with some of the snack makers giving jobs to people who would normally face barriers to working.

That said, they’re selling the snacks on their tastiness. They say the snacks – nuts and seeds and the like – are healthy, but who really knows about that.

Naked Snacks is already up and delivering snacks to people but they’re using Kickstarter to take it to the next level.

Working at a standing desk some of the time is good for your health but sometimes you want to sit down and, let’s face it, most of us don’t have a standing desk. Standing desks certainly aren’t an option for those of us who don’t always work in the same place.

Well this project wants to be the best of all those worlds. It’s a portable standing desk that’s adjustable so you can also sit down.

Basically, it’s a large, sturdy-looking folding tray that sits on top of a table or desk and raises your computer.

The desk will cost backers $175. Early supporters can also get a case for the same price.