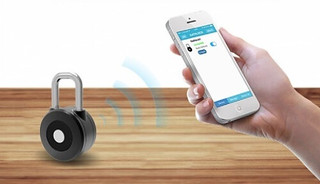 Draw and Erase Your Circuits by Hand

Here’s a pen that allows you to draw (and erase) real circuits without the need for printed circuit boards and soldering irons or those breadboard circuits that use a lot of wires.

The pen uses a conductive ink that allows electricity to col w along it and that ink is what sets the this pen apart. According to the campaign creators, the ink is more stable and conductive than other, similar, pens on the market.

The ink is also erasable, which is pretty cool.

Ever forget the combination to a padlock? Yeah. Who hasn’t.

Here’s a possible solution, it’s a Bluetooth-enabled padlock that you open with your phone.

There’s no combination, no keys. Also, it will send you a notification if your lock is opened and when it’s time to change the batteries.

It works with iOS, Android and Windows phones.

Bevel turns your smartphone into a 3D Camera

Seems like holograms, real holograms, not those one from the hockey cards when you were a kid, are going to be the next thing to make the jump from science fiction to reality.

This device is going to help them make that leap. The Bevel is a small 3D camera that attaches to your phone. Users pan across what they’re taking a picture of and the device scans it and creates a 3D image that users can easily share on social media.

It works with Android and iOS devices.