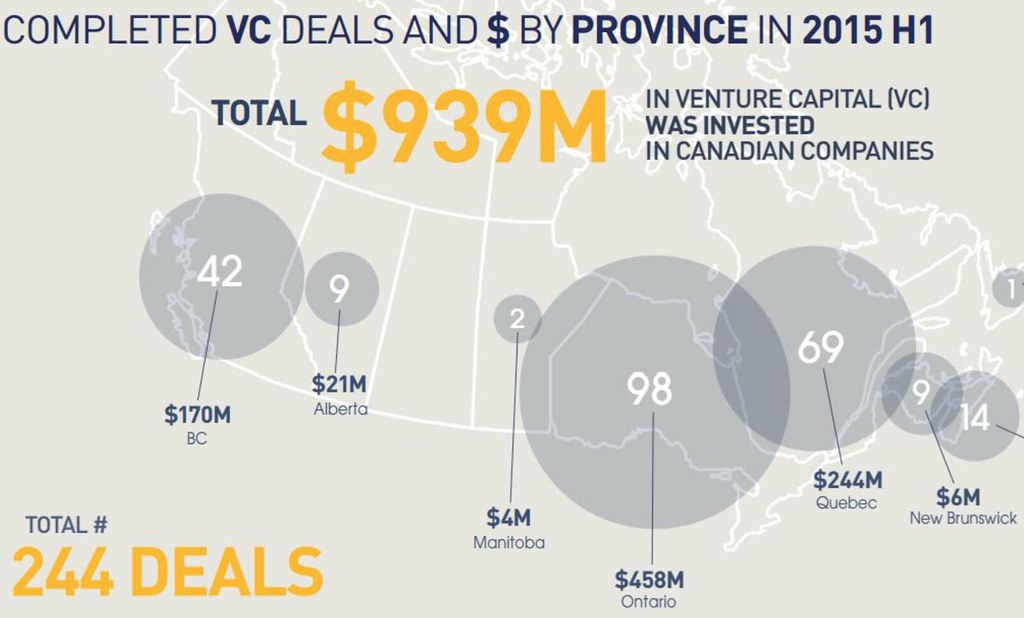 According to the Canadian Venture Capital & Private Equity Association’s 2015 half year market activity reports released this week, venture capital is up significantly in terms of both deal activity and disbursement levels. The half-year saw 244 venture capital completed deals, capturing $939 million. Those figures are up 21 per cent and 23 per cent respectively over the same period last year.

The surge in venture capital activity came in the second quarter of 2015 – the amount invested was up 53 per cent from the first quarter. Life Sciences played a significant role with the sector more than doubling the amount invested from Q1 at $92 million to Q2 at $211 million. Regionally, there were also massive spikes of VC activity in Q2. In British Columbia, deal activity grew by 123 percent quarter over quarter, and disbursement levels soared by almost 150 per cent. In Quebec, disbursements nearly tripled due to a surge in life sciences investments with two big deals driving growth (Clementia Pharmaceuticals, $73.9 million and Milestone Pharma, $20.9 million).

“A refreshed approach to venture capital in Canada, combined with recent successes and rising stars are creating a lot of market momentum,” said Mike Woollatt, CEO, CVCA. “Private investment is leveraging public investment very well and they are working together to generate robust growth.”

The trend toward greater private capital deal activity is expected to continue. Data collected from a comprehensive survey of CVCA members in July 2015 showed that the vast majority (82 per cent) believe economic conditions favour the private capital industry, and 66 per cent believe a lower Canadian dollar improves the business outlook.  As for possible exits, 60 per cent expect IPO and M&A activity will remain the same for the rest of 2015.

Check out the full report here.