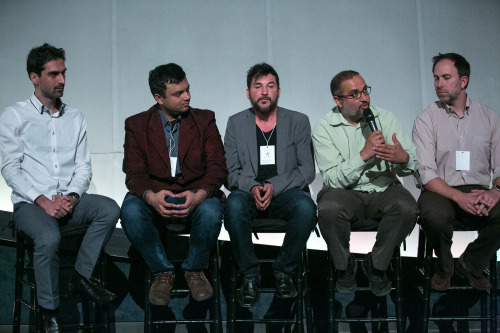 On Monday, DigiBC hosted a panel discussion on BCs Internet of Things.

Each of the panelists brought a unique view of the Internet of Things (IoT) in British Columbia and the broader world, opining from the angle of their respective professions.  The panel consisted of Shawn Sanderson, VP Internet of Things at Telus, Adrian Moise, CEO of Aequilibrium, Rob Perry, Director of Sales at Colony Networks, Matt Naish, VP of Sales & Marketing at Contigo Systems, and Graham Cunliffe, Managing Director of IoT Design Shop.

The event began with each of the panelists doing a seven-minute presentation about their companies, followed by an exploration of the trends that are shaping IoT, BC’s position in the IoT world, and what a connected IoT world will look like in the coming decades.

Regarding BC companies and IoT, Adrian Moise said, “There is an opportunity that the government can provide in terms of big companies being established here that can create this type of innovation and employ a workforce and attract talent.  The reality is if you’re only looking to sell your products in Canada, it’s a very small market, so for companies to be successful, they can perform and operate here in BC, but they have to recognize that there is a much bigger market south, and we’re also seeing significant growth in Asia and the Pacific regions.”

Graham Cunliffe followed up by saying, “I think for the government to do more than they’re already doing is difficult because it’s hard enough to put bounds around what IoT is.  How do you say you’re an IoT company, but (another’s) not, so you get nothing and (the other) gets tax incentives?”

Cunliffe continued by explaining that companies here can use the government programs that are available to help build products in order to expedite the process of finding product-market fit.  Once that has been achieved, companies need to immediately look at markets outside British Columbia.

When asked about what the IoT-connected world may look like in 30 years, one point of agreement was that most of the current talk about the potential is too incremental.  IoT has the potential to revolutionize our lifestyles and work lives.  The appropriate question may not be how IoT will be applied in, for instance, our vehicles, but whether we will even consider owning vehicles a necessity considering how thoroughly the world can be overhauled.

You can find future DigiBC events on their website.