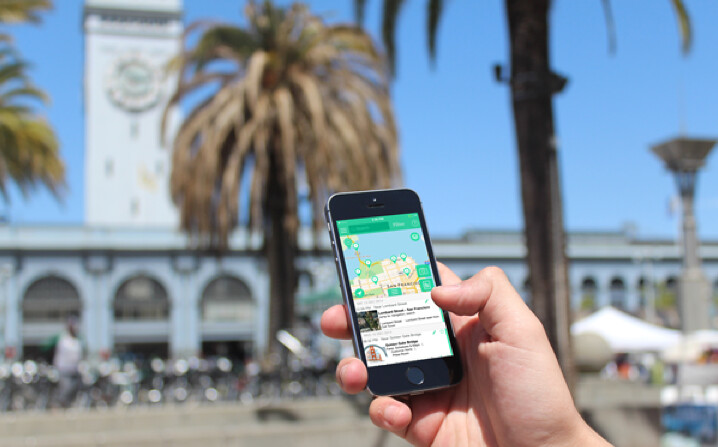 Montreal startup IdeaPlaces is about more than just linking a note to place on a map.

To do this, the app integrates with Dropbox and Evernote as well as Foursquare and Google Places.

Arp says that for people who are taking notes and photos, or creating documents or videos in the field, the IdeaPlaces offers a better way to organize that data.

“When you’re searching for that information to create context, it’s like trying to find a needle in a haystack. At IdeaPlaces, we take that needle and we pin it on a geographical map,” he says. “It’s very easy to use, it’s very easy to visualize.”

Ciprian Rarau, the founder of IdeaPlaces, says the idea for the app grew out if his personal interests.

“I’m a big note-taker myself,” he says. “I noticed there is nothing that fills that gap between the virtual world, the ideas, and the real world.”

He says that while there are tools and APIs for mapping publicly-available data, there’s nothing for people to map their personal data.

“There’s no simple tool that allows me as an individual, or me as part of a team, to map my knowledge and really understand it and have control over it,” he says.

Rarau has a long history in the tech business. Before starting IdeaPlaces, he was the vice-president of engineering at Montreal-based wearable tech startup OM Signal.

Arp and Rarau say tourists can use the app to plan a trip, using location-based reminders to let them to know when they’re near a site they want to see or a business they want to visit. Those users can then come home with a map of their travels, complete with their photos and videos already integrated.

Arp and Rarau are also seeing number of commercial uses.

Arp says real estate agents have used it to keep track of all the houses they’re selling or showing to potential buyers buyer, with the app allowing them to keep track of details like the asking price.

He says it also allows them to share those maps directly with their clients.

“They’re sharing a dataset, but you can even have private information that these users, [the] clients, aren’t sharing with the realtor,” Arp says.

Rarau says another client, who sells and delivers products to small grocery stores in New York City, used the app to replace both street maps and tools that he used to record details about his interactions with his customers – everything from the phone number to when he’d last made a delivery.

That commercial market is also a big part IdeaPlaces’ monetization strategy, the app is free to download but a Plus version, which allows users to access their data offline or collaborate with other users, costs $2.99.