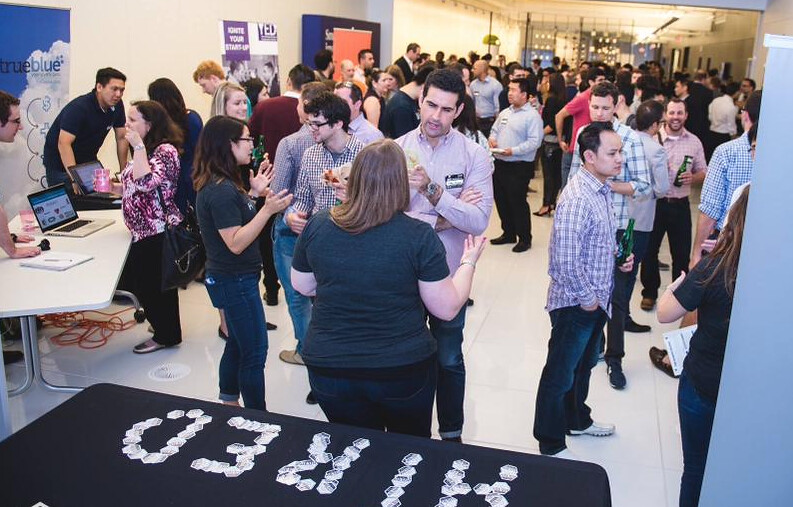 Pizza, beer, and the only place where it’s socially acceptable to be on your phone the entire time: that’s a TechTO meetup event.

Created in November 2014, TechTO already has 5,000 members. Their ninth meeting took place on July 6 at TELUS House in Toronto. TechTO’s events are a place for people in the tech community to meet up, talk to successful tech companies, or get advice for their own tech startups. It’s also the best place to be if you’re unemployed in the tech community, as recruiters are often there looking for developers, graphic designers, and sales people.

“We’re trying to help strengthen Toronto’s tech ecosystem,” says co-organizer Alexander Norman. While the event might seem intimidating for small startups, the successful companies aren’t there to gloat—well, maybe just a little—they’re actually there to give advice on how to navigate the inevitable obstacles thrown at most starting businesses.

Each event is set up with a presentation period where five companies give five minute presentations on the challenges they faced. At the most recent meeting, the presenters were Hubdoc, Mashape, Fundthrough, Ad Parlour, and Salesforce

Smooth Pay, Brizi, and Radiant Group from the DMZ were also there doing demonstrations before the presentations. Also present was one of the sponsors of TechTO: Get Hired, an online job marketplace for those in the tech field looking for work.

“Silicon Valley watch out, we’re coming for you!” says Goldlist, jokingly, to the amped up Toronto tech crowd. Though, there is some truth behind his statement. TechTO shows the potential of the Toronto tech community, which is growing fast and producing innovating startups. In fact, Toronto’s technology sector is the largest in Canada, and third largest in North America.

The next TechTO event is August 10.