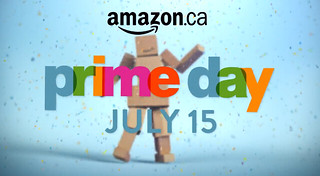 More than 90 years ago, holiday shopping found its official start the Friday after Thanksgiving, eventually becoming Black Friday, the biggest shopping day of the year.

Over the years, Amazon has helped make Black Friday even more of a global online shopping phenomenon.

Next week, Amazon turns 20 and on the eve of its birthday and they’re celebrating with Prime Day, a global shopping event offering more deals than Black Friday, exclusively for Prime members.

On Wednesday, July 15, new and existing members in Canada will find deals starting at midnight, with new deals starting as often as every ten minutes. They can shop thousands of Lightning Deals, seven popular Deals of the Day and receive unlimited fast, free shipping.

“Prime Day is a one-day only event filled with more deals than Black Friday, exclusively for Prime members around the globe. Members tell us every day how much they love Prime and we will keep making it better,” said Greg Greeley, Vice President Amazon Prime. “If you’re not already a Prime member, you’ll want to join so you don’t miss out on one of the biggest deals extravaganzas in the world.”

Not a Prime member? To participate in Prime Day, Amazon customers can sign up for a 30-day free trial of Prime at amazon.com/primeday.