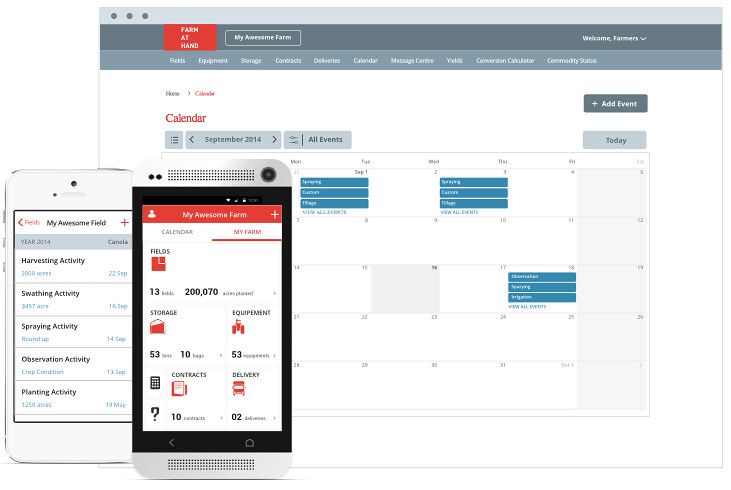 Farm At Hand, a provider of cloud-based farm management software, announced today that the company has formed a Board of Advisors in preparation for its Series A round.

Kevin North, CEO of Terapeak, has been named Farm At Hand’s first advisor, and will help guide the company through fundraising, global expansion and monetization.

Founded in 2012 by Himanshu Singh and Kim Keller, Farm At Hand was launched to take farm management from the notebook to the cloud. Singh, the owner of a software development company, learned about the challenges of farm management from Keller, a farmer turned tech entrepreneur. Together, they built a cloud-based farm management application that now allows farmers to manage their entire operations from seed to sale.

Farm At Hand currently serves more than 21,000 farms spread across five continents. Over 6 million acres of farmland have been entered in the system, accounting for roughly $1.5 billion worth of annual crop production. In the last six months, Farm At Hand has doubled the number of farms on the system.

“Farm management used to be a pen-and-paper process. Bringing it to the cloud has given farmers the ability to see all their records in one place and make more informed decisions,” said Singh. “We’re ready to bring our app to an even larger audience, and we know that Kevin North can help us move in the right direction.”

North is the President and CEO of Terapeak, where he is responsible for company vision, strategy, revenue growth and business operations. Under his leadership, Terapeak has been ranked as one of Canada’s fastest growing companies by PROFIT magazine for two consecutive years (2013, 2014) and was ranked #43 in Canada’s Deloitte Technology Fast50 in 2013.

“Farm At Hand is a tremendously inspiring ag-tech startup with a team committed to helping farmers,” said North. “The farmer turned tech entrepreneur story here is drastically benefiting the company’s customer base, as Kim and Himanshu are really in touch with the needs of the farming community.”