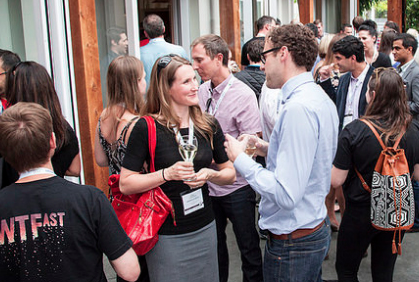 What a difference a year makes.

Of the top 15 Canadian tech startups at Metabridge 2014, only one was led by a woman CEO. At this year’s Metabridge event, five of the top 15 CEOs participating in the pitch competition were women.

A significant increase, to say the least. Also noticeable at this year’s conference was the increase in overall attendance of women entrepreneurs.

Are we that much better off than we were last year? Do we now have easier access to the button that adjusts the brightness settings on the future of women in technology?

We spoke with several woman CEOs who attended the conference and the outlook could be best described as cautiously optimistic.

Negin Angoshtari, CEO of Brainy Lantern (and current member of Accelerate Okanagan), is happy to see the change but wants to see more women represented at tech conferences like Metabridge.

“I’m glad we have more women up there pitching but I don’t think it’s enough,” Angoshtari said. “It’s too one-sided, and does bring about a networking challenge. It has a learning curve. As more women come in, there’s a balance that’s going to be established. It’s changing for the better but the pace is too slow.”

Angoshtari’s hesitation to concede true progress on the issue was echoed by several other startup CEOs who preferred to go off the record.

SEE ALSO: The Importance of Networking Events for Women

Despite this, two of the top 15 CEOs who presented at the pitch fest are enthusiastic about the future of women in technology.

Kathryn Loewen, founder and CEO of Control, sees this as the best time ever to be a female CEO in the tech industry.

“Absolutely we have made progress in the last year,” Loewen said. “I started my company a year ago and have had nothing but support.”

While most of her mentors in the tech and business community are male (including HootSuite’s Ryan Holmes), Loewen’s experiences have been positive.

“Sure, my fundraising was a bit more difficult, as most of my pitches for funding in Silicon Valley were in front of about 97% men. But you have to persevere,” she said.

Loewen grew up in Salmon Arm, BC, where there was no women’s hockey team.

“I was the only girl in the pee-wee league, and I just don’t believe in these perceived constraints stopping me from what I want to do,” she said.

Like Loewen, Nat Cartwright is also new to the tech startup world. But The COO and co-founder of Payso sees being a woman in the world of male-dominated tech as a significant business advantage.

“When I started it was apparent to me that there weren’t that many women involved, especially working in a financial technology business,” Cartwright said. “It’s often I walk in the room and I’m either the only woman or one of two or three.”

In her short time as COO, Cartwright has seen a positive shift in the support available to women-run businesses.

“I think there’s a lot being done about the issue of women in tech,” she said. “There are now angel groups that are investing in women, the Canadian government is actively supporting women. And I think it’s a competitive advantage to being a woman in technology. I find when I pitch [instead of the company’s CEO Jake Tyler] it gives our company a bit of an edge.”

Cartwright is encouraged by the amount of people talking about the ongoing issue, and not just because it’s the right thing to do. In fact, current data being released is going a long way in proving that investing in women-owned businesses is the right business approach.

“For instance, three weeks ago Kevin O’Leary came out and stated that the businesses he’s invested in that have women involvement do better than others with respect to their financial outcomes,” she said.

Speaking of O’Leary, Cartwright admits that there’s a “Dragons’ Den effect” that may have a positive effect on women hoping to set sail in the choppy waters of tech entrepreneurship.

“We actually went on Dragon’s Den three weeks ago, and they now have two female dragons,” she said. “But before the show existed I didn’t really realize someone could just go start a business from scratch like that.”

Shows like Canada’s Dragon’s Den and the U.S.’s Shark Tank are not only great forms of entertainment, but they are opening up people’s eyes into the diversity of people starting companies.

“When you see other people doing it, you think to yourself that you can do it too,” Cartwright explains.

For women in technology, there is much work to be done and gender equality is still too far away. But if Metabridge 2015 is an indication of the future, maybe we have come a long way in only one year.

Here’s hoping the trend continues; perhaps Metabridge 2016 will see a majority of woman-run companies pitching in the top 15 startups. How cool would that be?