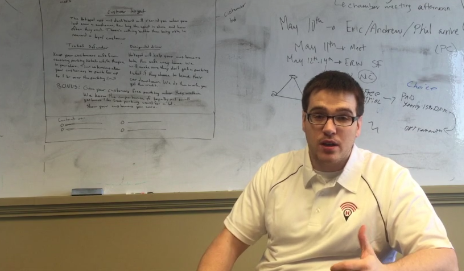 Fredericton’s Phillip Curley was a 21-year old engineering student when he identified the need for a pay parking application for his hometown.

The idea of having an app to pay for parking wasn’t a new one but because of Fredericton’s small size, it wasn’t cost effective for the city. Phillip solved that problem and applied his solution to three other Atlantic cities. He was so successful he quit school to develop his company, HotSpot Parking, and now at the age of 23 is ready to scale up to bigger cities across North America.

Phillip’s business achievement has resulted in him being chosen as the New Brunswick finalist in the Canada wide BDC Young Entrepreneur Award contest. This means he has a chance of winning the $100,000 prize and bringing his Atlantic Canada inspired product to major cities across North America.

Chris Cowper-Smith was working on his PHD in Neuroscience when he decided to tackle a problem that researchers had been trying to solve for 80 years: how to build an affordable and compact spring-loaded knee brace to treat individuals with knee injury, osteoarthritis, or a disability. He and his team developed a technology that’s akin to what is found in aircraft landing gear in terms of the complexity of the shock absorption and spring mechanism.

Chris’s breakthrough technology and his plan for commercialization of his company, Spring Loaded Technology, has resulted in him being chosen as Nova Scotia finalist.

Ontario’s finalist is Matt Rendall of Clearpath Robotics. Clearpath Robotics is automating the world’s dullest, dirtiest and deadliest jobs with intelligent service robots and autonomous vehicles that lie at the convergence of the Internet of Things and big data. Over the past six years, Clearpath has grown into a multi-million dollar business with success in the academic, mining, military, aerospace and agriculture markets in 40 countries.