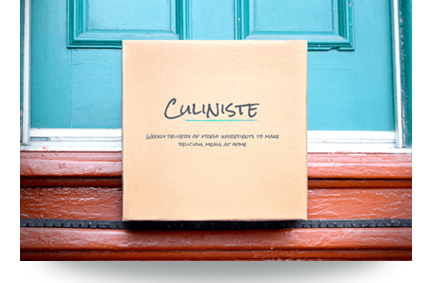 It’s actually kind of a surprise that people don’t really buy groceries online. After all, many of us have gotten used to buying pretty much everything else over the internet and having it delivered directly to our doors.

And since groceries are something most people need to have every day and can be particularly unwieldy to bring home, you’d think more people would do it.

“I realized that I was buying my shoes and my clothing online from amazing companies like Frank & Oak,” he says. “Realizing I was comfortable buying all sorts of things online I started looking into different options for buying food online.”

RELATED: Culiniste is hiring a Director of Growth

He says he tried to order his groceries online from a big grocery chain in Montreal but found it to be a frustrating experience.

“It’s really not a great offering,” he says.

That pushed him to try a startup that delivered fresh vegetables, but while he says he liked the quality and convenience, he found the price-point too high.

While some people might give up from frustration, Ferrari saw it as a business opportunity.

He’s now the co-CEO of Culiniste, a Montreal-based startup that delivers fresh ingredients and recipes directly to customers across Quebec and Ontario, and he’s trying to learn from the failures of the incumbents.

“We want it to be a really easy shopping experience,” he says. “So instead of having 10,000 items, we want to have six recipes that change every week that you can just click on … and then have a delivery of everything that thou need to make those meals at a price-point that’s comparable to what it would cost you to recreate the exact same box at a” large grocery store.

For Ferrari it’s all about creating a “sense of excitement” by delivering a box of “beautiful ingredients” accompanied by recipe suggestions that allow customers to start cooking right away.

While Culiniste’s business model isn’t unique, Ferrari says he spends a lot of time thinking about how to set his business apart.

Drawing on the model of startups like Frank & Oak, Ferrari says a big part of that will come from building a relationship with his subscribers.

“We’re positioning ourselves to be a kitchen companion for our members,” he says.

That means creating a lot of content around the brand. Culiniste has an active blog with things like beer pairings, cooking tips, spotlights on the foods of different countries and even knife recommendations.

He’s also trying to keep prices down for the food he sells. Currently, a Culiniste meal costs under $10.

Ferrari says his strategy is to centralize assembly and to try and avoid waste. Rather than holding a lot of stock, he says Culiniste doesn’t source food for the coming week until orders have been received and he knows just how much to buy.

While Ferrari won’t say exactly how many customers Culiniste has, he says it has subscribers in every major city in Ontario and Quebec and delivers thousands of meals a week.

The following discount code will get you $20 off: techvibesfoodie